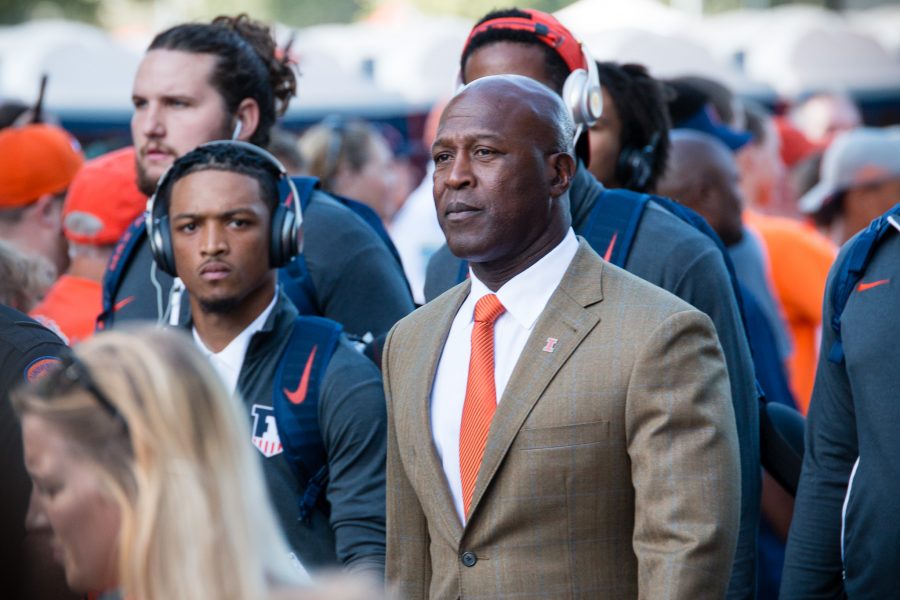 Illinois head coach Lovie Smith walks down First Street before the game against North Carolina at Memorial Stadium on Sept. 10, 2016.

Illinois linebacker Jake Hansen will undergo surgery after tearing his ACL at Saturday’s scrimmage. The injury could sideline him for the season.

Hansen was a three-star athlete coming out of high school, according to 247Sports.

The team released a statement from head coach Lovie Smith on the injury via its Twitter account.

“Jake Hansen is out with a serious knee injury that will require surgery…unfortunate, he was having a great camp,” Smith said. “Jake is going to be an outstanding football player. That’s just postponed a bit.”

Hansen’s absence, along with that of graduated Hardy Nickerson, will open up opportunities for other Illinois linebackers.

Juniors Julian Jones, Del’Shawn Phillips and Tre Watson will all vie for a starting role this year, and sophomores Dele Harding and Justice Williams will be in the mix too.

Phillips enrolled at the University in the spring and began practicing with the team. According to 247Sports, he was ranked the No. 2 junior college linebacker in the nation.

Watson played in all 12 games last season, starting in eight of them.

The Carrollton, Texas, native is the third Texan to commit to the Illini this offseason. Calvin Avery and Kievan Myers also committed to Illinois from the Lone Star State.

According to 247Sports, Daniels is the No. 132 best offensive tackle in the nation and No. 204 best player in Texas.

Of the 13 class of 2018 commits for the Illini, 12 are three-stars and one is a two-star. The class also includes Peoria native and dual-threat quarterback Coran Taylor.

An interview on the Mad Dog Sports Radio show gave Illini fans a sense of Smith’s stance on a highly discussed topic in today’s sports society.

Smith responded to the question of what he would do if one of his players was to take a knee during the national anthem before the game.

“Our guys talk to the media any day,” Smith said. “So if there is an issue they’d like to address, they can do it at any time. But we want our guys to be involved. I have no comment what other guys are doing.”

The news comes days after 12 Cleveland Browns football players knelt during the anthem before their preseason game against the New York Giants.

No Illinois players have knelt during the anthem in recent years, but Smith’s words and other athletes, both college and professional, may have an impact on Illini players this year.