Illinois soccer kicks off its season with 1-1 weekend 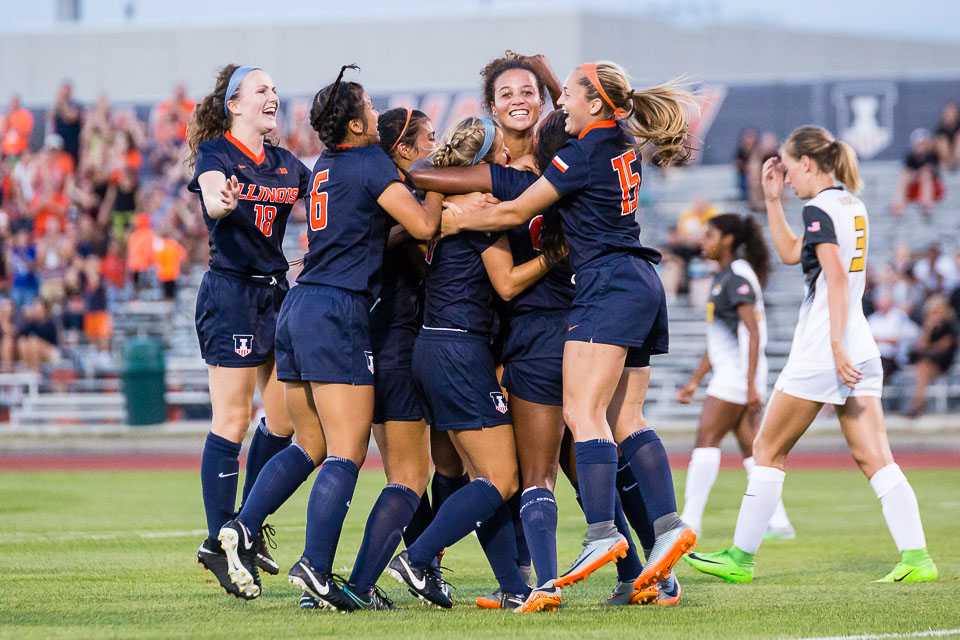 The Illinois socer team gathers around Arianna Veland (right center) after she scored a goal at the end of the first half of the game against Missouri at Illinois Soccer Stadium on Friday, August 18. The Illini lost 3-1.

Many freshmen got to make their first Illini appearances in the opener, which ended in a 3 to 1 loss. Freshmen Gabbi Chapa and Hope Breslin joined sophomores Jaelyn Cunningham and Arianna Veland and junior Lauren Ciesla as debutants in the starting line-up.

Freshmen Maggie Hillman and Katie Le also made their Illini debuts off the bench.

“I think with some injuries to some of our upperclassmen we have really relied on some freshman to step in and play a significant role in this first weekend,” head coach Janet Rayfield said.

At the 42-minute mark, the Illini took advantage of sophomore Alicia Barker’s flip throw. Freshman Maggie Hillman took her first career shot but was it deflected inside the box by a Tigers defender.

Seeing the loose ball, Veland seized the opportunity and put it in the back of the net for her first career goal.

“It felt amazing,” Veland said. “Just [having] the support from my teammates, I’ve been working so hard this past summer and this preseason. It felt pretty good to see that hard work pay off.”

Mizzou came out into the second half blazing with a shot in the first three minutes. Junior Patricia George countered immediately with an attempt of her own, but it was the Tigers’ Macy Trujillo who broke through the Illini defense, tying the game in what was the turning point in the loss.

On Sunday, the Illini returned to the Illinois Soccer Stadium to face DePaul and did just that.

The Illini offense controlled the flow of play at the beginning of the first half; however, the defense was the saving grace toward the end.

“The biggest thing right now is we have to keep the ball a little bit better,” Rayfield said. “We don’t count turnovers like you do in the world of basketball but we are giving the ball away way too often, too many unforced errors, and that really puts us on our heels in terms of having to defend way more than we should.”

The game was scoreless going into the second half.

Towards the middle of the half Ciesla broke the streak with her first goal of the season and second career goal.

“It was the breakthrough that I think I was looking for as a player and the team needed,” Ciesla said. “It definitely wasn’t an individual effort—I had a team behind me.”

The Blue Devils scored soon after, tying the game up.

Junior Patricia George broke the tie with a goal late in the second half, ultimately winning the game for the Illini, 2-1.

“We had a rough start to our first game, but we have continuously gotten better, and I just see so much potential on this team, just an overall chemistry,” Veland said. ”I think we are going to be a great team this year.”

The team has another chance for an at home win facing Washington at 7 p.m. on Thursday.