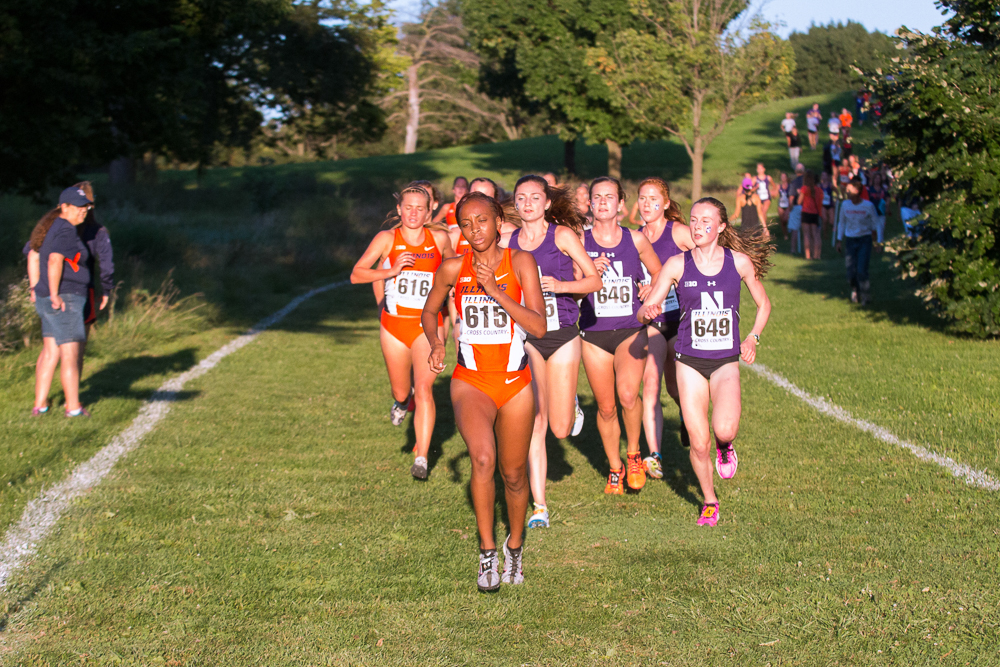 Denise Branch leading the team during the women’s cross-coutry Illini Challenge. The challenge was held at the UI Arboretum on Friday, September 2, 2016.

The mixture of talent is poised to become the foundation for Illinois’ distance program.

“This class was put together as a fundamental piece moving forward as a program,” Distance coach Jake Stewart said. “These girls are able to function at a high level. Hopefully, we’ll have future classes each year that will surround the girls with a high skill level.”

The bulk of freshman runners decided to attend Illinois following an announcement last November stating the “men’s and women’s indoor and outdoor track and field and men’s and women’s cross country will be led by a single coaching staff,” for the 2017-18 seasons per the Illinois Athletic Department.

The overhaul is a welcomed change, senior Denise Branch said.

“So far this year it’s been a real joy. Last year it was hard to be at practice, and there was a lot of tension in the air, a lot of people didn’t know how to act,” Branch said. “It felt hard to commit to something you knew was going to end.”

This year’s ensuing practices were laden with “good vibes” and a very different level of energy. A more positive environment works as a magnetic force that attracts athletes to Illinois, Branch said.

“This year’s class of 2018 was recruited a lot based off of names of athletes that are here already,” Stewart said. “Athletes surrounded by other really good athletes is how we want our program to look, and not only that, we want them to keep bringing positive chemistry in.”

Branch also noted that the camaraderie between the team, Haveman and Stewart is synonymous with the program’s fresh start.

“Coach Stewart and Coach Haveman are awesome together and balance each other out,” Branch said. “I think a lot of people don’t realize the importance of having a female coach because it gives you someone to relate to.”

The Illini clocked a 14th place finish at the NCAA Midwest Regional last fall after a 10th place finish the year before. Two of last year’s top scorers, including Branch, will return to the course this season.

According to Stewart, Illini veterans will aim at overall improvement while guiding a younger, more inexperienced group.

“This year we’re increasing the intensity, but it’s nothing anyone can’t handle,” Stewart said. “We have older girls to set examples, but it’s far too early to see what we’re going to have as far as race placement. We have 20 women on the team, and we’re all on a learning curve right now.”

In lieu of her senior season, Branch reflected on the security of the newly minted program.

“Once I leave, the program will be in good hands,” Branch said. “(We) have to be consistent and do everything we need to do and the rest will fall into place.”