If you get rid of a decades old tradition, of course people will be mad 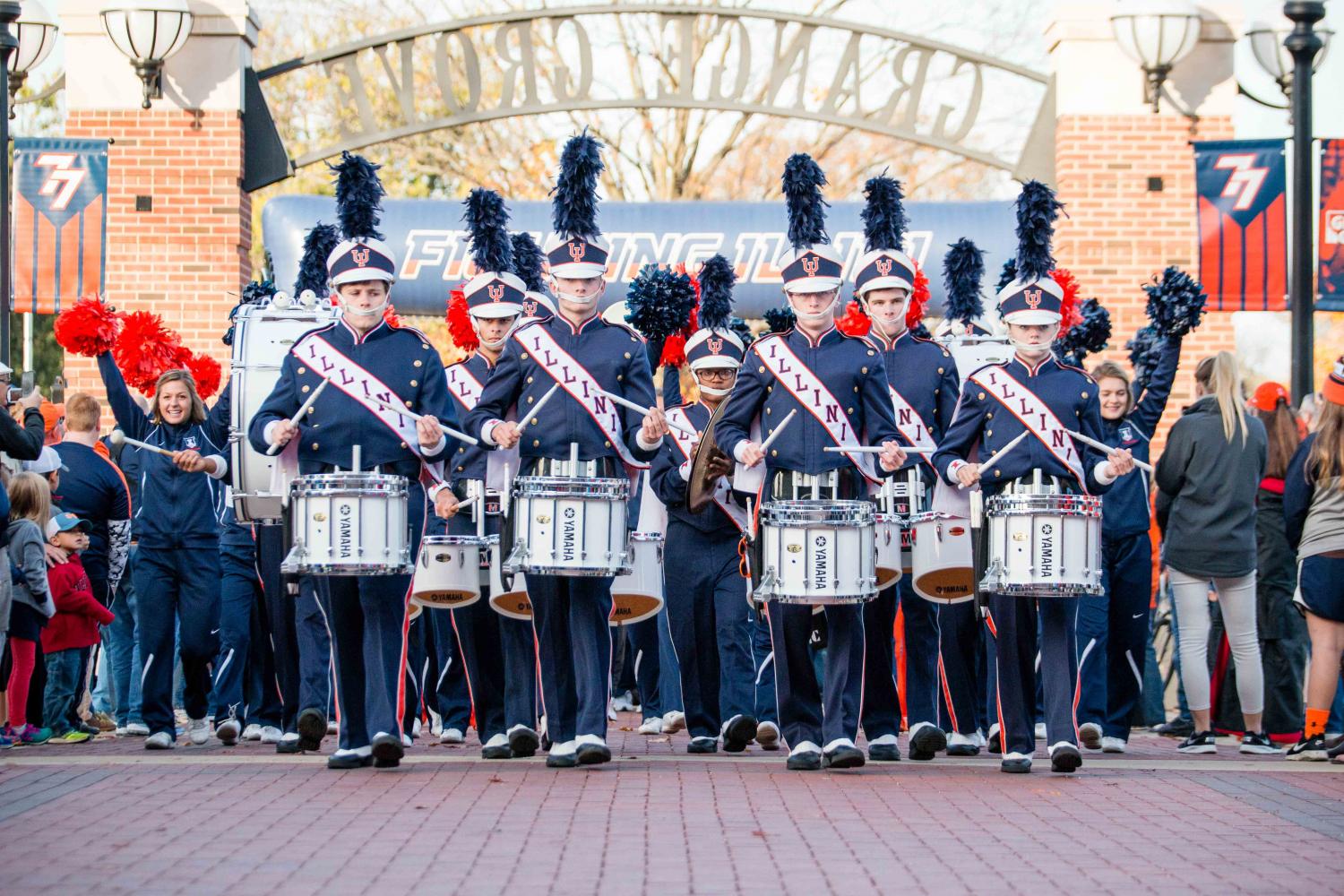 The Marching Illini drumine leads the team into grange Grove before the game against Michigan State at Memorial Stadium on Nov. 25, 2016/ Sports Editor Cole Henke disputes the reasoning the University used to retire the “War Chant.”

The University of Illinois screwed up by retiring the “War Chant” song.

But they didn’t screw up with the actual decision itself. It is the justification for the retirement that was botched.

The statement released by the athletic department on Thursday said the song was retired because the University wanted to be more inclusive, and because the song did not pump up the crowd as much as other songs and videos played on football game day.

I am all for reason No. 1. If the University felt the song was divisive and made some students or fans uncomfortable, then I don’t fault them in their decision. Being inclusive shouldn’t be seen as a bad thing, and sure the song is a major tradition at this University, but this was an extension of the decision to remove Chief Illiniwek, a much bigger tradition. Honestly, it was only a matter of time.

Reason No. 2 is where I find fault. It is an add-on, attached to try and dodge criticism. But in my opinion that is impossible, and the University should have stuck to their guns with the inclusivity reason.

“War Chant” is played by the Marching Illini every time the opponent faces third down. It is meant to pump up the Illini defense and to help them get that stop. But the problem was that this would mean the song would be played about 15 times per game.

I’ve watched Illinois football games from the stands, Block I and the press box, and I know how intimidating a chant can be early in the game, but it does noticeably lose its power in the middle of the game.

That loss of energy is supposed to be a reason why the song was retired, but I don’t buy it.

This retirement is not just for football games either. It will not be played at any sporting event from here on out. Now as intimidating as the “War Chant” can be at a football game with an energized crowd, there is nothing that can top the chant that takes place before every basketball game. The entire place claps along to the drum beat as the Illini prepare to take the floor. The sound is absolutely deafening. Everywhere you look, people have their hands up. Being inside amplifies the noise, and thus the intensity, and then the place erupts. I get pumped up watching it from press row.

But now that tradition has been retired because it didn’t pump up the crowd enough.

Like I said before, I think this is bogus. It was a reason attached at the end to try and justify the retiring of a song to fans that vehemently disagree with the decision.

But that didn’t work. A bunch of fans are still outraged over the decision, despite the University’s attempt to dodge it. This was a tradition that has been with the University for decades. The backlash was inevitable.

In any scenario, the second reason gives way to the first one, but also takes away from it. The claim that “War Chant” didn’t pump up the crowd as much as other songs could be solved by just lessening the number of times it was played throughout the game. But instead they just retired it, because they felt it could be divisive. The problem with this statement is if it were a song that got the crowd excited on every single play, but was still divisive, would they retire it as well?

It takes away some of the strength of the reasoning.