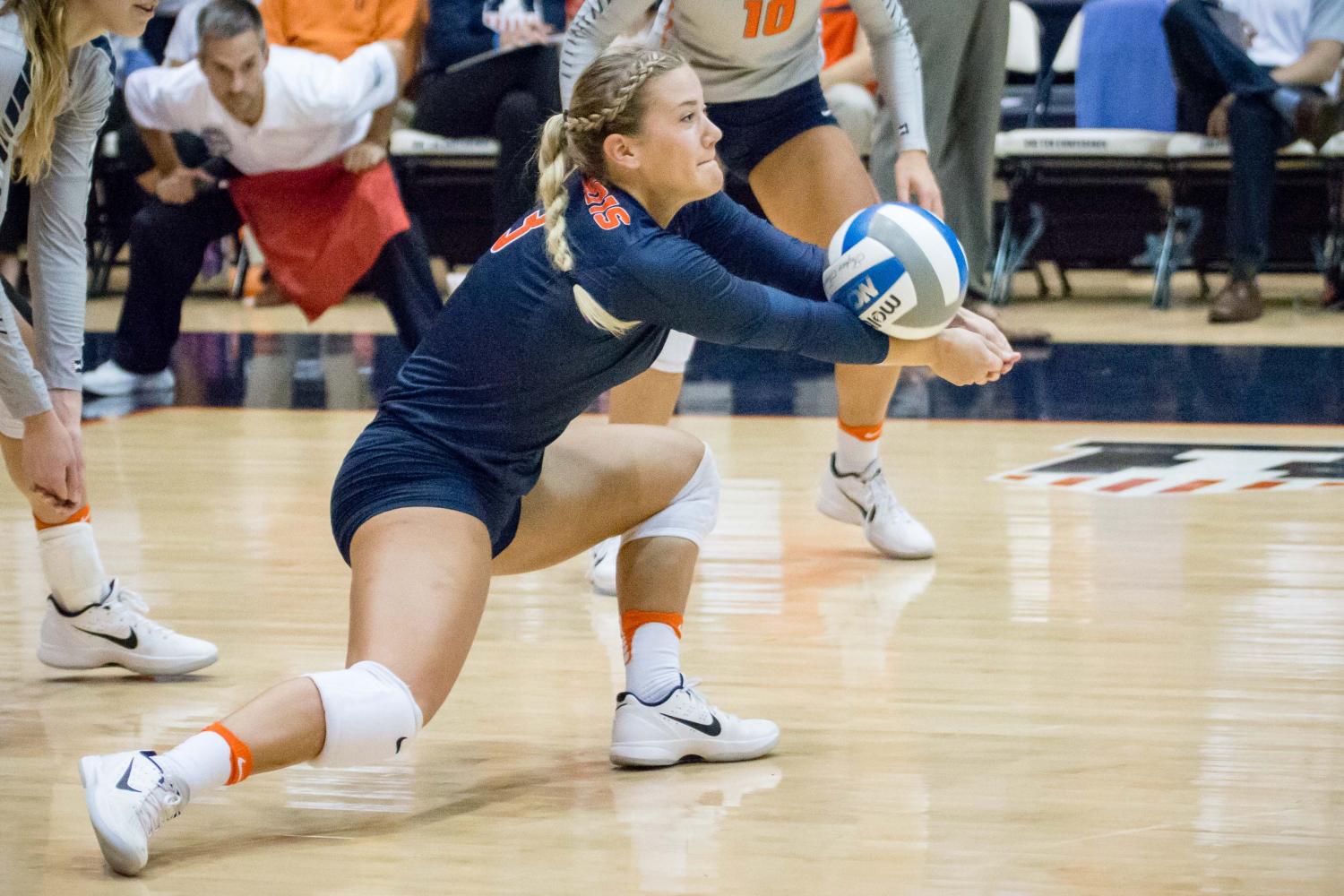 Illinois’ Brandi Donnelly passes the ball during the match against Northwestern at Huff Hall on Oct. 15, 2916. Donnelly, the only senior on the team, will bring veteran advice to her teammates.

After earning a tournament title during their 3-0 weekend at the Montana State Bobcat Classic, the Illinois volleyball team is looking forward to continue their momentum at home on Sept. 8.

Illinois swept Gonzaga during its first match of the tournament, with 42 total kills, 10 of which came from sophomore outside hitter Jacqueline Quade and nine from junior middle blocker Ali Bastianelli. Junior setter Jordyn Poulter recorded 35 assists.

Despite a smooth opening to the weekend, the Illini saw tight competition from Montana State. Winning in four sets, the Illini punched three aces and 52 assists – 48 from Poulter. The only dropped set of the match was by a narrow three-point deficit.

“We were pretty consistent. Three games is a lot in three days,” Donnelly said. “We’ve been practicing certain things and now we’re actually doing them. Once we dropped a set to Montana State we came and crushed them in the next set, so you could say we’re good at punching back.”

Donnelly, the team’s lone senior, said in her final season donning the orange and blue she has already seen improvements and expects to carry last weekend’s success into the bulk of the regular season.

“We’re all being really competitive during practice. This year we have a lot of depth on the team,” Donnelly said. “Each weekend will get harder and harder, but at home in a few weeks we’ll have all of our fans. Those games are big games, so we’re gonna be pretty amped, but we have to treat it like any other game.”

In Bastianelli’s eyes, Illinois’ front line has been playing with a better groove.

“We’ve been working on offense during practice, hitting different shots, realizing that every ball we hit isn’t going to go down right away,” Bastianelli said. “This weekend I feel like I did that, and our outsides did that. We definitely faced some good backcourt teams and really played consistently.”

With the addition of eight new freshmen, Bastianelli said the team’s leadership is set to come from all corners of the court this fall.

“All the new freshmen have been doing a good job and really stepping up. Morgan O’Brien has been doing a great job in the back row, leadership wise,” Bastianelli said. “(They’ve) been focusing on backcourt defense a lot. A couple of them got good playing time in this weekend and they really did a great job and executed the things that we’ve been doing in practice.”

Despite a new foundation of freshmen, veteran players have been making the biggest impact on the court so far this season, Donnelly said.

“Jordyn (Poulter) has always been a great leader,” Donnelly said. “I’m captain of the back row and have been doing that for a while, so nothing is too different this year. Being the only senior, I do lead, but everyone on the team leads in a different way. We’re good at that.”

The Illini will travel to Louisville for the Cardinal Classic this Friday. Illinois kicks off its tournament bid against Kent State (1-2) at 3 p.m.