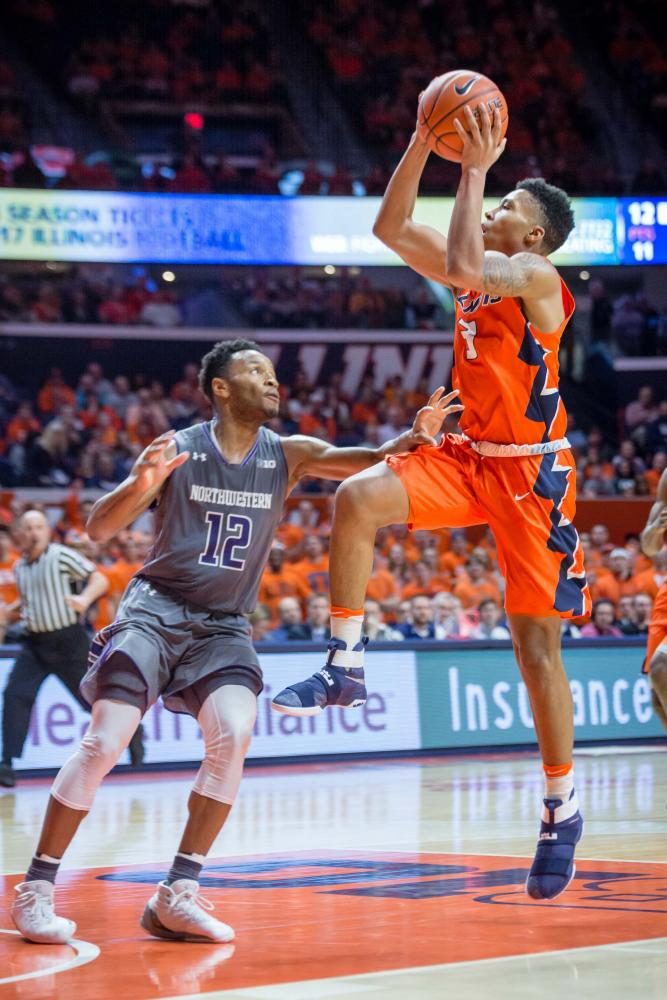 Illinois’ Te’Jon Lucas goes up for a layup off a fast break during the game against Northwestern at State Farm Center on Feb. 21. Lucas has increased his vertical by 6 1/2 inches.

It showed the 6-foot-2-inch guard sky for a monster tomahawk dunk. Frazier acknowledged in the caption that before he got to Illinois he was not dunking that easy.

Frazier was given a team award for largest vertical gain over the offseason, and now I can see why.

Time and time again, Illinois strength and conditioning coach Adam Fletcher has continued to amaze me in how big of transformations he makes with his athletes each offseason.

Fletcher joined the basketball team back in August 2015, and has certainly made the most of his time with the Illini hoops squad.

This time around is no different, and one of the most impressive parts of his work this time around is how big of an improvement we can already see from the freshmen since they got down to Champaign this summer.

In a quick glance through Fletcher’s Twitter account (@adam_fletcher41), you can see him tweeting out seven-week transformations of players such as Frazier, Mark Smith, Te’Jon Lucas and more.

One of the most interesting things about this all is that while many people assume these changes come from lots of practices and working out a lot, Fletcher always seems to emphasize the importance of a healthier diet.

In Fletcher’s program, the diet is just as important — if not more than — the workouts themselves, and he is not afraid to call his players out on his Twitter.

One particular example was in the beginning of camp this season; Fletcher tweeted out pictures of four different players’ meals. The first picture contained some oatmeal, veggies and a cup of yogurt. The second and third were very similar, sometimes adding in some extra eggs or fruit depending on what the players’ goals were. Finally, the fourth picture featured a plate of French toast covered in syrup, with bacon, fruit and yogurt on the side.

Fletcher pointed out in the caption that it should be easy to spot the new guy’s meal. I wonder if he’s eaten French toast since.

Self-discipline when it comes to meals seems to be something he expects from players — especially during their freshman camps. It is also something he makes sure to focus on throughout his whole training camp before the season.

Another unique part of Fletcher’s offseason programs is he does not always stick to the conventional lifts, exercises and training methods.

Many offseason programs will work on improving overall strength, conditioning, basketball skills and things more focused in that arena, but Fletcher has seemed to take more of an approach based around creating explosiveness, body control and improving the overall athleticism of each of his athletes.

The successes go beyond improvements to physique as well.

Sophomore point guard Lucas has decreased his body fat by 6 percent and increased his vertical by 6 1/2 inches.

Over the past two years, junior guard Aaron Jordan has added 26 pounds of muscle without changing his body fat percentage.

Freshman Mark Smith maintained his weight over the summer while adding 5 pounds of muscle.

The amazing part of this all is that these are just some of the improvements that Fletcher has mentioned on his account.

As much credit that Fletcher is given — and rightfully so — none of this would be possible if the players did not totally buy into the program. Fletcher continuously emphasizes the importance of buying in, and strictly following not only his workout programs but also the diet.

One of the most impressive observations I’ve made from even just reading through Fletcher and his players’ tweets is that the freshmen have completely bought into it.

Aside from the praise shown on Fletcher’s account, players such as Smith and Frazier have raved about the improvements this offseason in videos showing improved athleticism, explosiveness and overall game.

All in all it was another extremely impressive offseason from one of the best strength and conditioning coaches in the game. Fletcher has continued to impress and if it translates to the season at all, the Illini look like they’ll be in great shape.