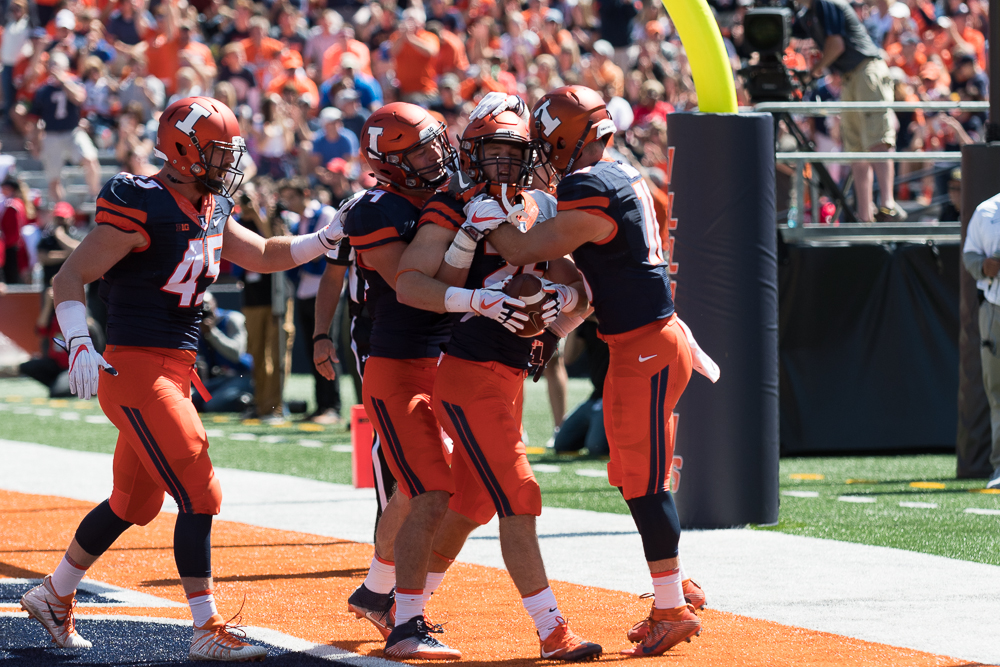 Freshman running back Mike Epstein celebrates with his teammates after scoring his first touchdown in Illinois' 24-21 win over Ball State on September 2.

Freshman running back Mike Epstein faced some of the best national high school competition during his time at St. Thomas Aquinas.

He and his teammates lost in overtime last year to Bishop Gorman, the No. 1 team in the country, that had several of its players sign on to play college football.

So the Florida native has seen what college-level competition looks like.

And he showed his comfort level in his first college game as an Illini on Saturday.

“(Playing in a college game) wasn’t too big of a difference to high school,” Epstein said. “The players are a little bigger I would say. A lot of people talk about the speed, but I feel like we played against pretty good competition in high school, so I was pretty prepared for it.”

Epstein led the Illinois rushing attack, gaining 54 yards on 11 carries to go along with two touchdowns. He was also a threat in the passing game, hauling in two catches for 32 yards.

Wide receiver Mike Dudek said he liked what he saw from Epstein and that he could relate to what the freshman is experiencing at this point in his career.

“Man, (Epstein) did amazing today; I kept telling him all the time throughout camp like ‘dude, you’re gonna be a player for us,’” Dudek said. “I was the same way as him, just a young guy coming in here trying to find my role, but I told him ‘man, screw all that. Come out here and be a star.’”

Head coach Lovie Smith was also impressed with what Epstein did against Ball State. He said that Epstein is part of a talented group of freshmen that the coaching staff played Saturday.

“Mike Epstein has been good since he has been on campus,” Smith said. “He hasn’t missed a rep throughout training camp, so it’s not like (his success) was a total shock to us.”

Kendrick Foster started at running back for the Illini but had a slow day on the ground. He could not find much room between the tackles and finished with 15 yards on eight carries.

Reggie Corbin and Dre Brown were held out of the lineups due to injury. Freshman Ra’Von Bonner was healthy but did not see the field.

This left Epstein with some opportunities to give Illini fans a sense of his abilities and comfort level competing at a Big Ten school.

But Epstein said he respects how Foster, Corbin and Brown have become mentors to him from the first day he arrived in the summer. He said he understands that each of them will be battling for playing time, but it’s a friendly competition.

“(Foster and Corbin) have been here a little longer than me, so they know some ins and outs for me,” Epstein said. “They do everything they can to help me, and I appreciate that.”

With Brown and Corbin’s uncertainty to play heading into next weekend’s tilt against Western Kentucky, Epstein will have another chance to establish an identity.

But for now, he said he has a grasp of what to expect from the college game.

“College football is pretty much what I thought it would be,” Epstein said. “It was really good to be out there with a lot of fans. I dreamed about this moment, and I was able to execute today and hope to continue that.”