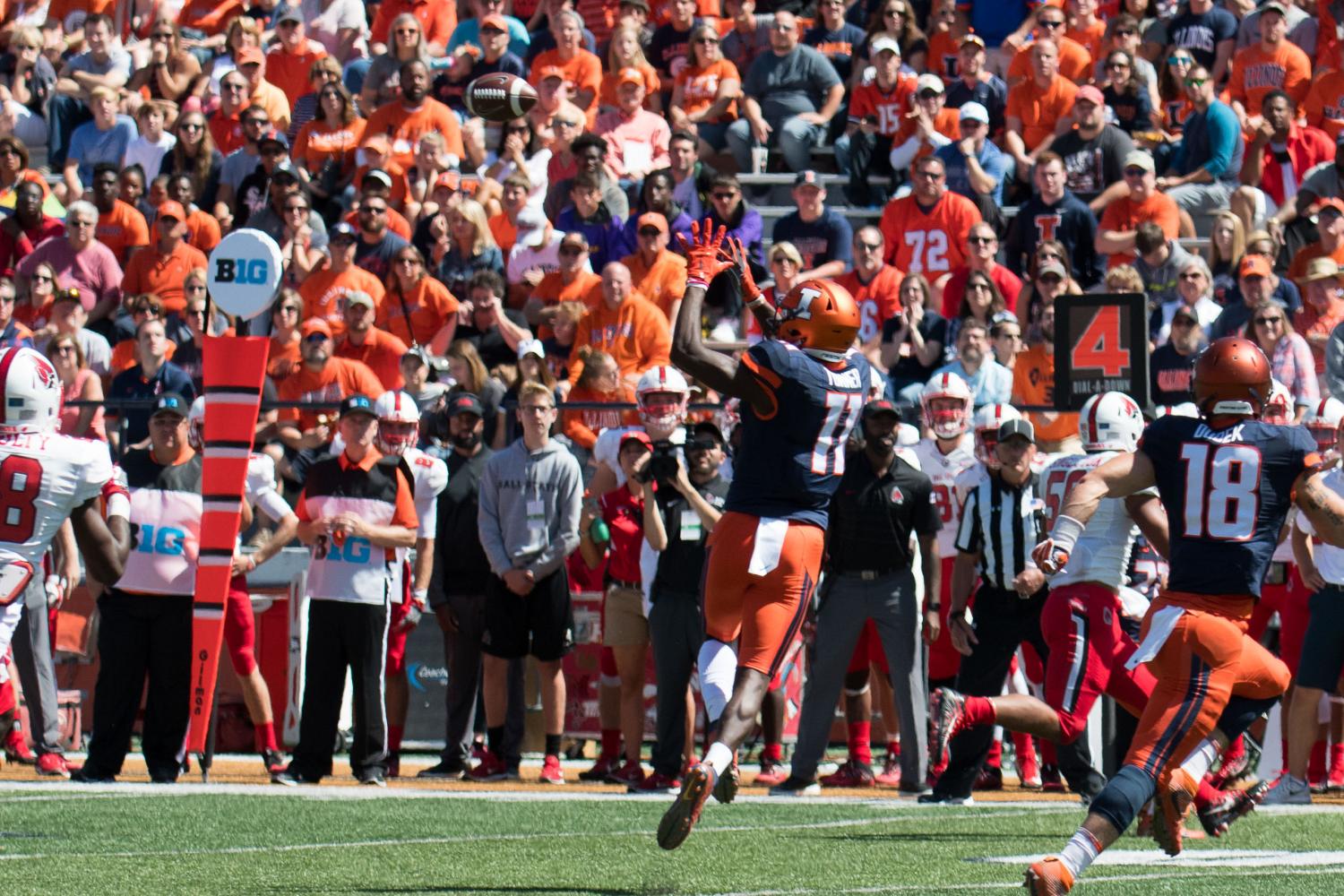 Illinois wide receiver Malik Turner jumps to catch a pass for a successful fourth down conversion during the team’s close victory against Ball State on Saturday. The Illini won 24-21.

Wide receiver Malik Turner said after Illinois football’s 24-21 win over Ball State that the Illini offense would not normally look like that.

I sure hope it doesn’t.

The Illini offense looked dysfunctional all game, with a breath of fresh air coming every few series in the form of a feel-good touchdown catch from wide receiver Mike Dudek, a solid run from freshman running back Mike Epstein or a turnover initiated by linebacker Tré Watson.

The offense struggled to push the ball down the field all day. Quarterback Chayce Crouch seemed to have virtually no time to make decisions in the pocket, and running back Kendrick Foster could not find any gaps between his offensive linemen that weren’t getting routinely dominated by the Cardinals. Only a handful of the 24 freshmen who played for the Illini looked entirely comfortable on the field, as their inexperience showed.

These problems all became blatantly obvious in the third and early fourth quarters.

It was ugly. I almost stopped watching altogether. The problems on offense all came to a head in the fourth quarter, when Crouch threw a ball to Dudek, but it deflected off of Turner’s head and into the hands of a Ball State player.

Most of Memorial Stadium thought the game was over when Ball State snagged that interception at their own 35 yard line with five minutes left in the game and a four point lead.

But it was at that time, in a game dominated by freshmen getting their first career starts and with a potentially season-deflating loss on the line, that the Illini veterans stepped up and made everything I wrote about before this void.

Watson, who already forced two turnovers earlier in the game, led his defense to an insanely fast three and out. Ball State could only eat up a minute and a half of the remaining time, giving the Illini plenty of time to drive down the field.

That is when Dudek broke free for a 52-yard punt return, showing everyone that he still had his old speed, even after tearing his ACL twice.

Then Turner made a catch on the sideline, and it took basically all 11 Ball State defensemen to bring him down.

Crouch showed that when the Illini need him to, he can pick up those last few yards when he dove into the end zone to pick up the 2-point conversion.

The Illini relied on a lot of freshmen yesterday, and a lot of Illini fans are relying on those freshmen to carry the future of the program. This season of Illinois football is a wash for a lot of people, including myself. The final record isn’t going to matter in the long run if the program gets to where it should be in a few years. I honestly thought I’d forget this season in a few years.

Those veterans seem to be on a mission this season to make sure that I, and the rest of the Illini fan base, don’t forget them.

Instead, they made me forget about those first three and a half quarters. I sat there and watched Dudek juke his way down the field, and at that point the game might as well have just started. On that last drive, the upperclassmen willed the crowd to forget about the earlier parts of the game.

I was ready to call it quits on this season of Illinois football all together. The upperclassmen made me forget about that, if only for a drive.

Cole is a senior in Media.