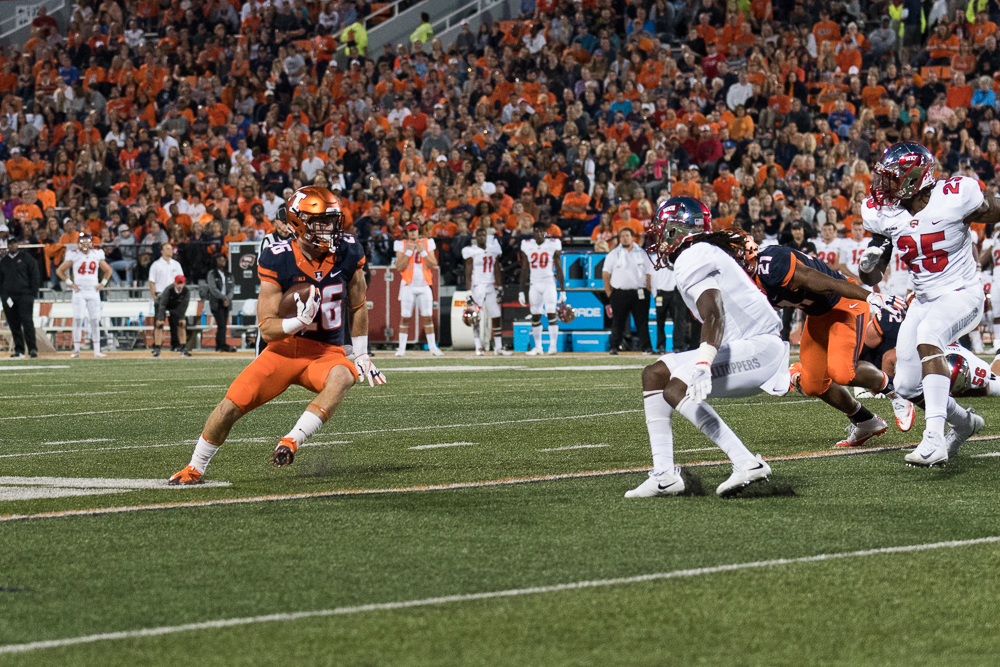 Running back Mike Epstein stares down a Western Kentucky defender during the Illini's 20-7 win on Saturday.

The Illinois defense looked like a whole different squad than what it showed last week against Ball State.

Illinois put pressure on Western Kentucky quarterback Mike White all game, forcing him to throw into double and triple coverage.

Linebacker Julian Jones intercepted White’s pass in the second quarter to put the Illini up 13-0.Defensive end Isaiah Gay and linebacker Del’Shawn Phillips hurried White, forcing him to throw it up into the Illinois coverage with no receiver close to Jones.

The Illini lost a key part of their defense when linebacker Tre Watson was called for targeting in the second quarter. Watson was visibly frustrated while walking off the field with a trainer.

Western Kentucky notched its first third down conversion with eight minutes and 19 seconds to go in the third quarter. The drive was later stalled after the Hilltoppers could not convert a third-and-20.

“Our young defensive line and our young secondary really stepped up to the table,” head coach Lovie Smith said. “Last week, we weren’t really good on third downs, but tonight there was a lot of second-game improvement.”

The run defense allowed little room for the two-headed attack get through.The Hilltoppers rushed for only six yards.

“I came ready; I knew that I was starting, and I knew I had to come in with the right mindset,” Hobbs said. “I think (the defensive group) found out who we are. If we keep working, we can be a shutdown defense.”

The Hilltoppers gave the Illinois offense multiple opportunities to put points on the board, but it was inconsistent throughout the night.

Quarterback Chayce Crouch threw some passes into double and triple coverage in the first half, but he got the offense in a bit of a rhythm in the second half. The junior finished 14-25 for 107 yards and an interception.

The Illini opened up the second half with a 6:41 scoring drive. It ended with Crouch leaping over two defenders into the endzone for a nine-yard score on third and five.

The touchdown put Illinois up 20-0.

True freshman Mike Epstein got the start at running back for Illinois. He recorded 111 yards on 21 carries. Senior Kendrick Foster ran the ball only three times for 11 yards. Other true freshman Ra’Von Bonner got 12 carries for 25 yards.

White punched in a two-yard touchdown to cut the deficit to 13 early in the fourth quarter.

Illinois was able to chew some clock on the ensuing position, putting together a drive that took 7:04 off the clock, resulting in a punt.

Western Kentucky could not get much going offensively after that, turning the ball over on downs on its next possession.

Illinois ended the game with 20-7 victory, giving it a 2-0 record on the season.

“2-0 means a lot,” Crouch said. “We’ve not been 2-0 often in the last two years, so it definitely means a lot moving forward. We know we can win; we know we can play a lot better, so that’s definitely a confidence booster and gives us momentum.”