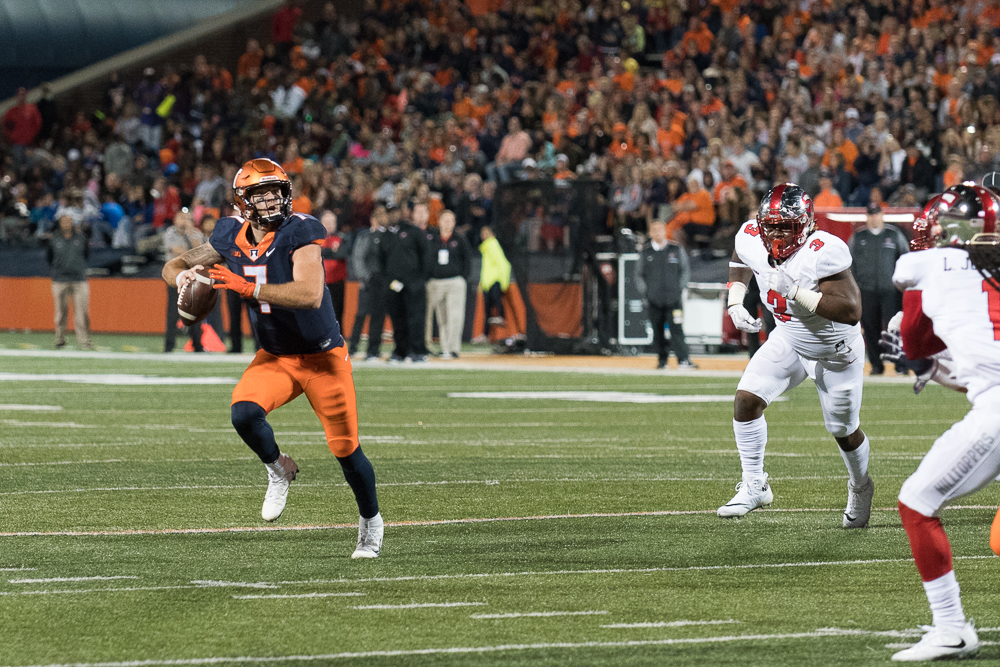 Illinois quarterback Chayce Crouch is pursued by a Western Kentucky defender as he looks down field. The Illini won 20-7.

He has demonstrated over the majority of his college career that he is not a one-dimensional quarterback.

The senior compiled more rush attempts than passes in a limited role during his freshman campaign.

Flowers then started his sophomore season for the Bulls, gaining 991 yards on the ground on 191 attempts.

But last year was the quarterback’s best rushing season.

Flowers has also shown off his passing abilities during his time as a Bull. He threw for 2,296 yards as a sophomore and 2,812 yards in his junior season.

“He’s a Heisman Trophy candidate; he can do it all,” head coach Lovie Smith said. “It’s documented that he’s a great athlete. He can run and move the chains with his legs, but he’s an accurate thrower too.

The quarterback has a few wide receivers the Illinois defense will have to focus on when it takes on South Florida on Friday.

Marquez Valdes-Scantling had a similar performance to what he provided the offense last season over his first two 2017 games. The senior has hauled in 106 yards and touchdown so far.

The South Florida run game is also a force that has had success early this season. D’Ernest Johnson has rushed 35 times for 114 yards and two touchdowns.

Johnson is a part of a two-headed attack leading the backfield. Darius Tice has run for 151 yards and three touchdowns this season.

The offense has helped South Florida to a 2-0 start this season. The Bulls were scheduled to play against Connecticut last weekend, but the game was postponed due to travel concerns amidst Hurricane Irma.

The Illinois defense understands that Friday will be a tough test. Defensive coordinator Hardy Nickerson is confident his squad can stop the potent South Florida offense.

“With our guys, we just have to approach it the same way we did last week,” Nickerson said. “We’ve been very, very detailed in our preparation and those guys are just taking to the game plans and really absorbed what we want to get done, and that’s really what’s been paying off for us.”

Junior Tre Watson was forced to exit last week’s game against Western Kentucky after he was ejected for targeting.

Watson said he is solely looking at this week’s opponent and understands how important being a 3-0 football team would be to him and his teammates.

“We’re coming into any game thinking we’re going to win the football game,” Watson said. “Now we’re in a good position to be successful. We put three wins under our belt and going into a bye week and coming out against Nebraska feeling ready to go and ready to attack every game after that.”

Central Florida and Florida International Univeristy’s games have already been postponed this weekend. However, Raymond James Stadium in Tampa is set to host both the South Florida game Friday and the Buccaneers game against the Bears Sunday.

South Florida also announced that hurricane first responders, along with their families, will be given free admission to the game. High school football teams also have the chance to claim free tickets after many of their games were cancelled last weekend.