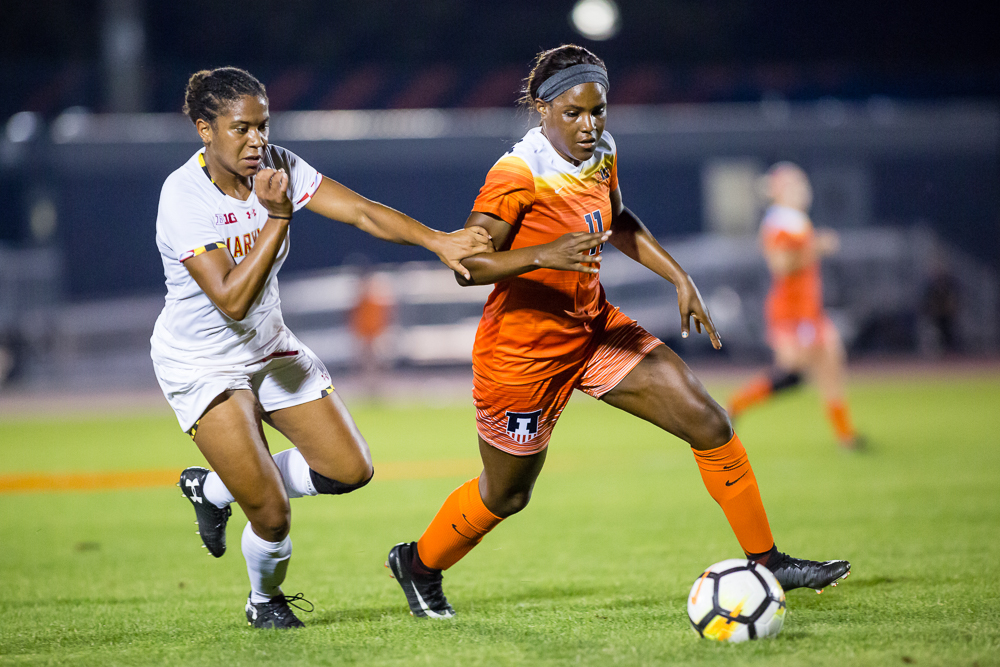 The goal gave Maryland a 1-0 lead that they would hold onto for the remaining few minutes.

Illinois head coach Janet Rayfield had an optimistic take on the game, focusing on the positive aspects rather than what went wrong in Illinois’ fifth-straight defeat.

“I think we competed; I think with our effort and our energy, there were moments were we played some really good soccer,” Rayfield said. “We had some great passing sequences and created some really good looks and opportunities. We’re playing the kind of soccer that you know we wanted to play weeks ago and now we’ve got to reap the benefit of that moving forward.”

While Maryland dominated the possession, there were a few instances in which Illinois created chances in the attack, including an early shot from sophomore forward Kelly Maday, which forced a save out of Maryland goalkeeper Rachel Egyed.

As the game progressed, Maryland’s initial game plan of playing long aerial passes to speedy freshman Hope Lewandowski was abandoned, and the Terrapins seemed to try and control more and more of the possession, while taking plenty of shots on goal. Nine of their 16 shots came in the second half, and the Terrapins managed to put 10 shots on frame.

Had Illini keeper Jaelyn Cunningham not come to her team’s rescue, the score could have been much more lopsided. Cunningham, who totaled nine saves in the match, recognized the Terrapins second-half adjustments.

“I think they got more confident, as a result they took more shots. I think for us in that situation we kinda panicked and I think we need (to be) calm. That’s a big key for us going forward,” Cunningham said.

Reflecting on the goal, Cunningham noted that the team needs to step up and contest shots in that situation, so as not to give opponents too much time to pick out big chances.

“(Maryland) played it back, took a great shot, I think we gotta contest it next time and hopefully we can make the change and come out stronger on Sunday,” she said.

Particularly in the second half, the game took on a more physical tone, and there were a few instances in which some Illinois supporters felt the team was unjustly penalized for plays in which Maryland was not. Rayfield expressed her general satisfaction with the way the game was called, but acknowledged her disagreement with a select few calls.

“I think it was a physical Big Ten game,” Rayfield said. “Soccer is a contact sport and it’s the referee’s job to keep control of that and he did a decent job tonight with respect to that, but certainly there were a couple calls that he heard from me (about) on the sidelines.”

With the Illini’s 7-0 blowout defeat to Ohio State last Thursday, narrow defeats at the hands of No. 7-ranked Penn State and Maryland, now  7-1-1, may be seen as improvement for a young side that regularly features ten true freshmen.

Illinois takes the field again at home on Sunday afternoon when the team will look to take down an undefeated No. 12 Rutgers team that is currently 7-0-2 (1-0-1 in Big Ten play).