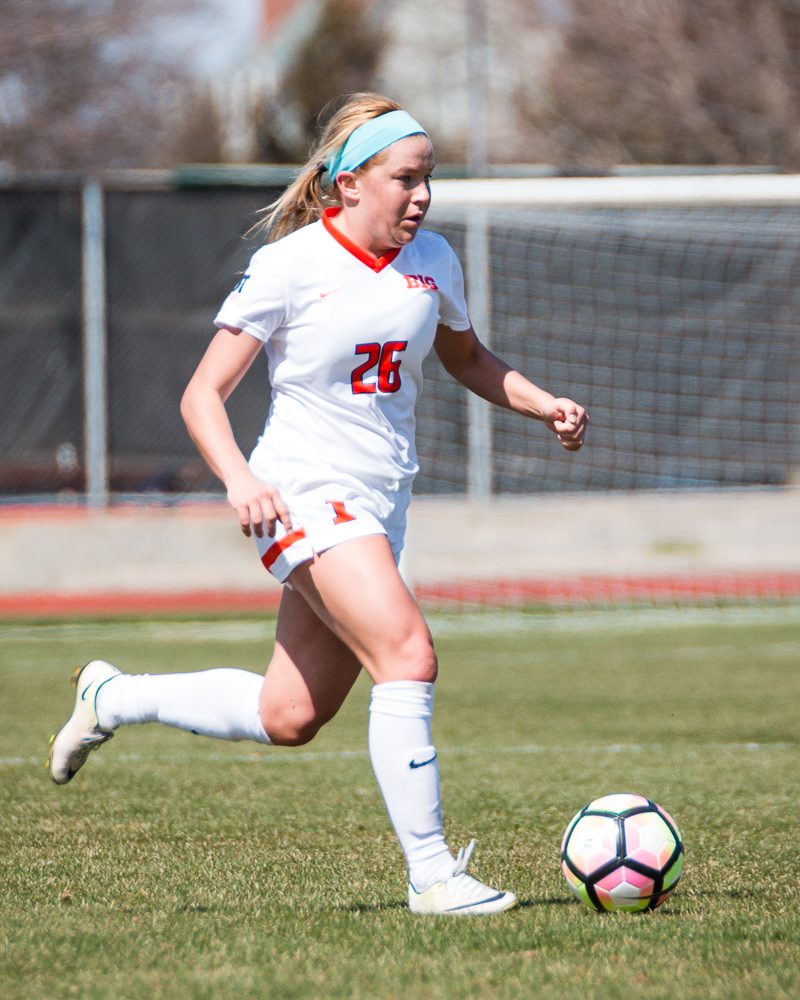 Illinois’ Katie Murray (26) dribbles the ball during the game against Loyola at the Illinois Soccer Stadium on Saturday, April 1. The Illini won 2-1.

Any sports fan will tell you that trusting a rebuilding process is tough to endure, but ultimately, suffering a slew of losses so that your team can build its identity pays off in the long run.

As the Illinois soccer team suffered its sixth consecutive defeat on Sunday, this message was the center of coach Janet Rayfield’s take on her team’s recent performances. Reflecting on a narrow 2-1 overtime loss at the hands of No. 13 Rutgers, Rayfield had many positive things to say in her evaluation of Sunday’s game.

“I’m really proud of (the team) in terms of the way they fight and the way they work,” Rayfield said. “Results aren’t always in your control and I thought we battled back. Rutgers hasn’t given up a goal all year and (we) got one and thought we had a second one, so credit (goes) to our team for fighting today.”

“It definitely shows that we were here and that we can compete with them,” Murray said. “It’s something that we did before in the past and we were confident it was gonna happen again, especially on set pieces.”

As Murray knocked in a bouncing ball from a corner kick, a feeling of hope was nearly palpable on the Illinois sideline as they found a second-half equalizer after Rutgers had opened the scoring through Colby Ciarrocca’s neat dribbling and powerful finish.

The Illini’s becoming the first squad to put one in the back of the net against the Scarlet Knights made Rayfield proud.

“I think it just shows where we’ve come,” Rayfield said. “You look at the early part of the season and even our struggles defensively and look what we’ve done from the Penn State game on, how we’ve fought and battled and even kept the ball, but to get the first goal, for it to be our first Big Ten goal.”

The breakthrough seemed to propel the Illini forward, and they looked more comfortable on the ball after scoring. Although they could not find a winning goal in regulation, as they took the pitch for overtime, there was a feeling that the game was theirs for the taking.

Ultimately, as Illinois became keener to bring numbers forward, they paid the price.

Rutgers found freshman forward Nneka Moneme on the counter attack, and she fired the winning goal past Illinois keeper Jaelyn Cunningham. The sophomore was called into action all game, totaling eight saves on fifteen shots by the Scarlet Knights. The Illini only managed two shots in the contest, with Murray’s goal being the lone attempt on target.

Rayfield acknowledged that Rutgers’ ability to make quick goals, particularly on their second score, was the difference in the match.

“The last one, certainly we got caught in transition and two players went to win a ball and it gets flicked in behind us and we’re out of shape,” Rayfield said. “I told our team before the game that the team that was best in transition was gonna get some opportunities and Rutgers made the most of that second one.”

Illinois dropped to 3-9 overall, with a 0-4 record in Big Ten play, while the Scarlet Knights improved to 8-0-2 overall and 2-0-1 in conference, extending their undefeated start to the season.