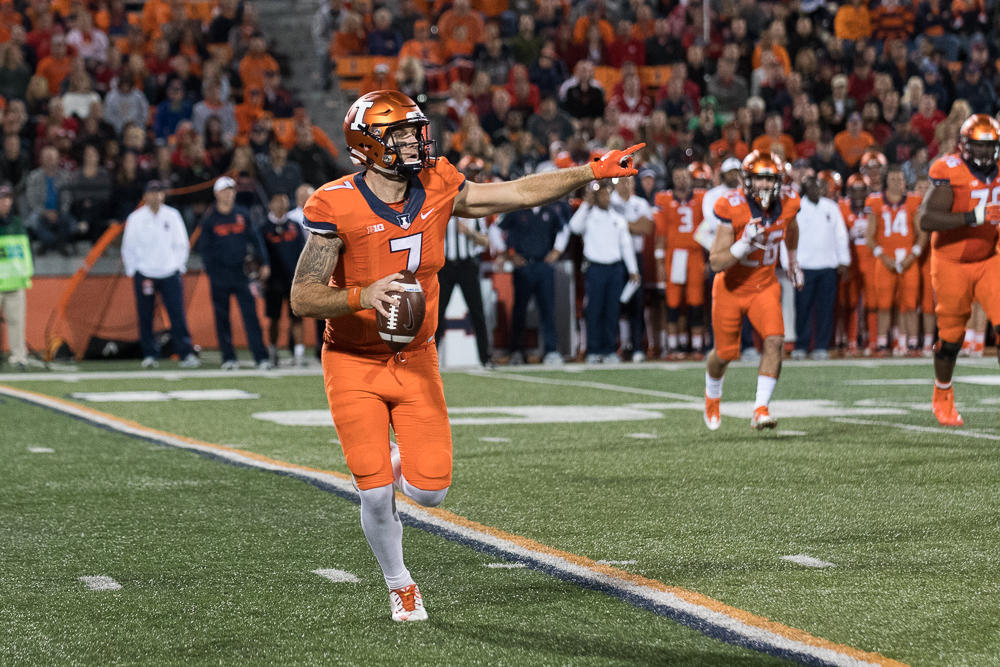 Illinois quarterback Chayce Crouch searches for a receiver down the field. The Illini lost to Nebraska 28-6

Chayce Crouch started the first four games of the season, compiling 427 passing yards and one touchdown. He ran the ball 46 times for 183 yards.

“Some positions you try to stay the course as much as you possibly can,” Smith said. “You have to kind of look at what is going on on the field. There’s a lot of things we’re not doing right, but in order to make that next step, we needed to make that change.”

Offensive coordinator Garrick McGee said he also thought the decision was necessary but believes that the entire unit needs to be better.

“I was at the game Friday. I was there. I was what our fans saw,” McGee said. “That wasn’t good enough, but not just the quarterback. Our offensive front has got to play a lot better.”

McGee said Crouch took the news like a professional and only wants what is best for the Illini to win games.

Smith said circumstances could change. But for now, freshman Cam Thomas is next in line behind George for the starting quarterback spot.

Thomas is a three-star recruit out of Marian Catholic High School. The freshman was suspended for last week’s loss to Nebraska after violating team rules.

“Things start over; right now, he’s a part of our football team,” Smith said. “He will be competing for playing time. We don’t give out permanent jobs. It’s about a starting rotation for us.”

Another Illinois defender was called for targeting against Nebraska.

Bennett Williams was thrown out of the game after he made helmet-to-helmet contact with a receiver in the first quarter.

Williams is the third Illini to be tossed for targeting this season. Stanley Green was called for the penalty against South Florida, and Tré Watson committed it against Western Kentucky.

After the game, Williams took to Twitter to voice his displeasure with the targeting rule and how it has been implemented.

The Targeting call was constructed to help the game; I say it's ruining the game.

Defensive coordinator Hardy Nickerson stressed that ultimately it falls upon the coaching staff to teach players to tackle within the rules of the game to avoid future targeting calls.

“We have to make the necessary adjustments so we’re not losing players,” Nickerson said. “We just have to lower our targets. We teach our guys to hit what we call the strike zone, which is the bottom of the chest plate to the knees. But we have to adjust that a little bit further.”

Nickerson said he believes that he and his team need to be in compliance with the rules, regardless of what opinions they may have.

“It becomes a difficult thing to execute in terms of tackling when a receiver has caught a ball and they see the defender coming,” Nickerson said. “They start crouching, and that’s when it becomes pretty difficult in the judgment on how low you have to get.”

Smith impressed with Hayes and McLaughlin

Punter Blake Hayes has caught the attention of Smith and the coaching staff early on this season.

Hayes has placed seven balls within the 20 yard line and has booted two for over 50 yards across four games.

He has averaged 40 yards per punt and has helped flipped the field when opposing teams take over on offense.

Kicker Chase McLaughlin has connected on five of his six field goal attempts this season. His longest came against Ball State when he hit a 40-yarder.

“(Hayes) is accurate; I’m talking about his placement for the most part,” Smith said. “And Chase, we’re getting what we expected and what we needed.”