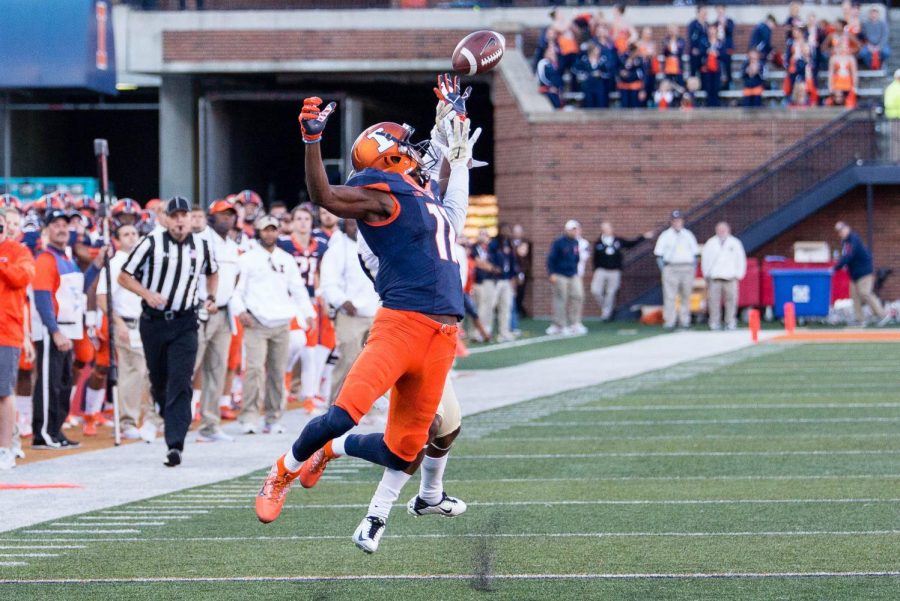 Illinois wide receiver Malik Turner (11) tips a pass that he would later catch during the game against Purdue at Memorial Stadium on October 8. The Illini lost 34-31.

Looking at both Iowa’s and Illinois’ football seasons so far, the teams’ trajectories have been strikingly similar.

Both teams had promising starts, with the Hawkeyes going 3-0 in nonconference play and the Illini starting 2-0 with a win in Champaign against a Western Kentucky team that was favored by eight points.

Then, both teams played a Heisman Trophy candidate and were dismantled by the player. Illinois traveled to Tampa, Florida, only for USF quarterback Quinton Flowers to accrue 386 yards of total offense and five touchdowns between the air and the ground.

Meanwhile, Penn State phenom Saquon Barkley crossed Iowa off of the list of defenses that he will torch this season, rushing for 211 yards and a touchdown.

Then both teams lost a winnable Big Ten game last weekend, with Michigan State defending its home turf against Iowa and Illinois coming out flat against Nebraska.

Now with the teams each sporting two-game losing streaks, their matchup at Kinnick Stadium on Saturday presents a chance for each program to get their season back on track.

But while Iowa’s camp is trying to keep things from going off course, the Illinois coaching staff decided they had seen enough, and were ready to shake things up.

“There’s been a similar tone the last couple of weeks,” said head coach Lovie Smith. “There are some things we have to better in all three phases. We had some opportunities offensively. We need to be able to get touchdowns. Defensively, we need to take the ball away. We have to put the best group together to play football this week.”

And in doing so, Smith and his staff decided to bench Chayce Crouch, who has started all four games at quarterback this season.

Jeff George Jr. will presumably get the start, with true freshman Cam Thomas slated to be the second stringer.

“We’re trying to get this offense rolling, and I feel like I can do my part,” George said. “I’ve been preparing every week as if I was the guy, and I’m excited and ready to go.”

The Illini coaches hope that George can offer a different set of skills at the quarterback position that will help jump start a passing game after only managing 99 yards against Nebraska, even with as much talent as the Illini have at wide receiver.

“The receiver position is a strong position for us player-wise,” Smith said. “Malik Turner, Mike Dudek, Carmoni Green, Louis Dorsey. We can go through a lot of guys that we need to distribute the ball to better.”

Turner in particular should see more of the ball this week. Illinois’ leading receiver a year ago, Turner has yet to catch a touchdown this season and only has 14 receptions through three games.

The senior has not gotten any sort of connection going with Crouch, who failed to find him open downfield. After catching 11 passes in last season’s finale against Northwestern, Turner has been unable to eclipse four catches in a game this season, a set of performances the senior has been unimpressed with.