Illini of the Week: Kara Marbury 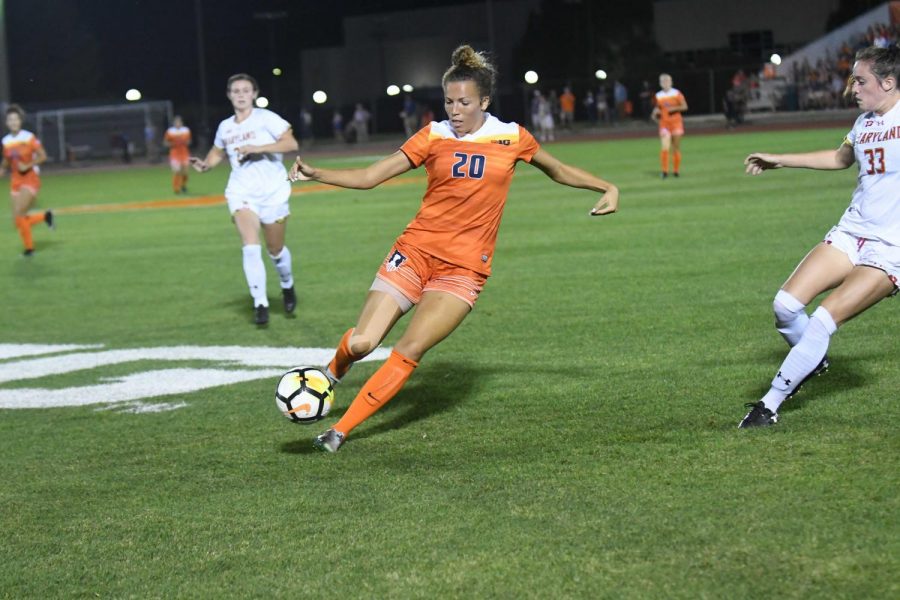 In what has been a tough season for Illinois soccer, performances such as Kara Marbury’s against Indiana could turn the tide.

Sunday’s victory over Indiana saw many firsts for the Illini, but most importantly, Marbury became the first player to score two goals in a game, playing an integral part in her team’s win. Marbury could not take all the credit herself, as she praised her teammates when describing her first goal.

“Kelly Maday was trying to beat the defender one v. one and ended up getting a corner kick, which we had been working on in practice,” Marbury said. “Then we had Patricia (George) take the corner kick, and she took advantage of Indiana’s lineup and played a short corner. I popped off one of their defenders and made a run into the space, and she played me the ball.”

Marbury’s appreciation of her teammates continued to show in her analysis of her second goal.

“Katie (Le) got the ball and saw me running in behind the defenders. I happened to get it at my feet and I took a chance with my left foot and it ended up going in the goal,” Marbury said. “I don’t think the win was because of any one person; it was a team effort. Everyone came out (and) worked extremely hard. Anyone who was put in worked up to the expectations that we have for each other.”

While Sunday’s performance may have been the first tangible evidence of Marbury’s hard work paying off, her coaches have noticed her work ethic over the course of her four years in the Illini program.

Associate head coach Jeff Freeman praised Marbury as a role model and her evolution as a player.

“Kara is a role model in terms of work ethic. She definitely sets the tone for us and what she does on the field carries over to the rest of the team,” Freeman said. “Her mentality has always been great start to finish, but she’s become a little bit more efficient in what she does. She used to just run and work hard. Now she’s a lot smarter as a player than when she first came.”

Head coach Janet Rayfield echoed these same sort of sentiments, and feels that as her team plays better, Marbury will continue to find success in front of the net.

“What you always get from Kara is an unbelievable work rate and an unbelievable desire to compete,” Rayfield said. “As we’ve started to play better soccer and keep the ball, it allows her to get higher and get closer to the goal, and that’s creating more chances. On Sunday she was able to finish two of those.”

Marbury did not seem to want to individualize her leadership, but rather views being a role model as part of a senior’s duty to her team.

“I don’t necessarily know that I’m a role model. As a senior, it’s (my) obligation to try and lead the team by example. So when I step out on the field, that’s what I try and do: lead by example,” Marbury said. “I work hard, I try and help create chances. I’m always gonna have my teammates’ back and hope that they would always have mine.”

It is clear that Marbury values her team’s effort as a whole to be more indicative of the result rather than one player’s performance. A mindset like this is extremely valuable, and if it can be passed on to a young Illini team that includes 10 freshmen, results such as Sunday’s will no longer be pleasant surprises, but rather the expectation, and Kara Marbury’s work ethic will be the root of the change.