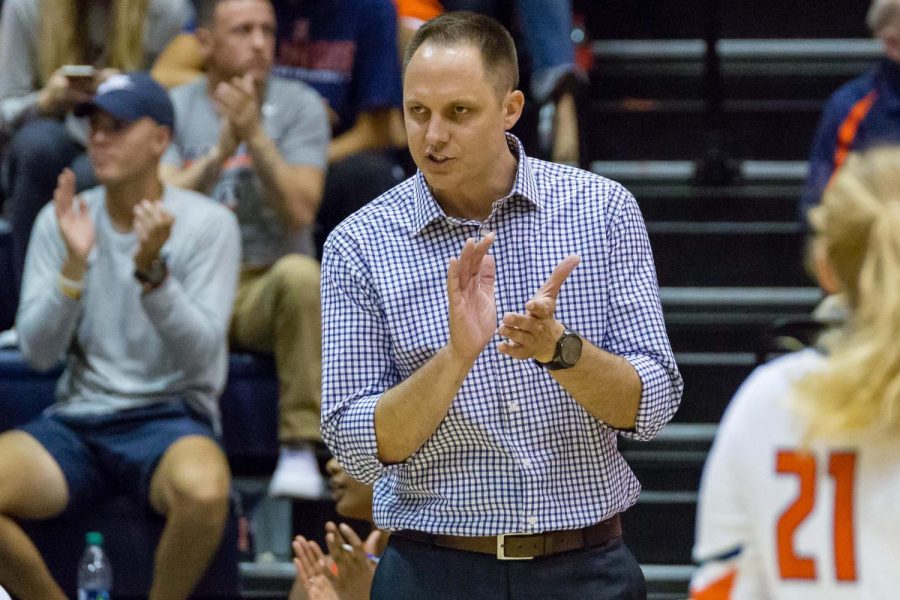 Illinois head coach Chris Tamas claps for his team during the match against Stanford at Huff Hall on Friday, September 8. The Illini lost 3-0.

After five weeks on the road, the Illinois volleyball team will make a long-awaited return to Huff Hall Friday against No. 18 Purdue.

Huff Hall will host its fourth annual IlliNOISE Night Friday in lieu of the team’s homecoming. The promotional night is celebrated to the tone of over 2,000 fans, including the Spike Squad and the Illini bands. Last year, IlliNOISE Night set a “loudness” record of 112 decibels.

Head coach Chris Tamas said it will be a much-needed change of pace for the Illini.

“It’s just going to be a renewed sense of energy,” Tamas said. “We just look forward to playing for the home crowd again, and sleep in our own beds and all of those things. Being on the road for five of the first six weeks is a bit tough. And I think the players are ready to come home. I’m ready to come home.”

Playing at Huff Hall is a magical experience, said redshirt sophomore outside hitter Beth Prince. Before she was an Illini, she said she heard about the energy Illinois fans bring to the game day atmosphere.

“I think for a long time the Spike Squad and the network of our giant fan base has been thought of as a seventh man on the floor,” Prince said. “Like I remember reading articles before I was even here about that, and it’s really great to be able to experience that first hand.”

Despite the anticipated flux of game time energy, the Illini are preparing to face off against the Boilermakers like any of their other Big Ten opponents.

“I think you try to approach it based on how we approach every match. We indicate strengths and weaknesses, we try to slow down those strengths and try to pick off the weaknesses just as every team’s going to try to do when we play,” Tamas said. “They’re playing us, so I think it’s about what we can do with some of these things.”

After a loss against Penn State last week, Tamas said the Illini need to get off to a faster start in matches.

“I think it took us a little bit to get going against Penn State. We talked about that after the match,” Tamas said. “We have to battle from point one and believe we have to hang with any team in our conference as deep as our conference is.”

The 12-3 Illini are looking at ways to control the game from their side of the court, Tamas said. The Boilermakers boast a 13-2 overall record, with their most recent loss to the Ohio State Buckeyes in four sets. Purdue rivals Illinois with a 0.351 attacking percentage, while Illinois comes in at 0.308.

Prince emphasized the team’s approach — tackling defensive and offensive strategies against Purdue one day at a time.

“I think really so far we’ve talked more about us defensively. I think today we might start talking about offensively, like what shots and everything we think are gonna work, but I think we really need to focus more on their hitters and their rotations, especially yesterday and then today we’ll probably dig more into their team and what we can do to score on them,” Prince said.

According to Tamas, Illinois is focusing on playing stronger as a team and capitalizing on the  Boilermakers’ weaknesses.

“Every team has its strengths and weaknesses, and they have three real physical pins,” Tamas said. “They have experienced juniors and seniors that have been around the conference for a while, and an experienced setter and a seasoned team overall. When you’re battle tested in the Big Ten I think it goes a long way and so we’re looking for a battle pretty much. And I think the big deal is just slowing (them) down.”

Purdue has four seniors, but Prince said the difference in seniority hasn’t fazed the Illini.

“Obviously with girls that have played longer, they have had more time to grow their volleyball IQ. So we know that they have range and shots in different things that they’re going to do,” Prince said. “But I think it’s a really good opportunity for us to also expand on ours.”

After Purdue, Illinois will face off against Indiana University on Saturday for the second time this season. Earlier, the Illini swept the Hoosiers in their Big Ten debut on the road 3-0. Indiana most recently lost to Purdue in three sets during a two-game showdown.

The Hoosiers post a 0.262 attack percentage against a 0.202 of their opponents so far this season.

Prince said revisiting teams throughout the season is an opportunity to not only see immediate improvements, but also tackle imperfections on both sides of the net.

“I think what’s really cool about that is when we scout them, we can scout them against us,” Prince said. “We can be like, ‘OK, we did a great job handling this, but this is where they scored their points on us.’ So we’re making changes in ourselves. It’s not like we’re watching them score against another team.”

Tamas said the difference in the Illinois’ second match against Indiana will lie in minor adjustments.

He said Indiana could mix up their rotation, just as Illinois did.

“We made a few changes and they made a few changes as well, so there will be some positions that are the same and some that are different,” Tamas said. “It’s just a matter of taking a look at that and try to play kind of the ‘what’re they going to do’ and can we counteract that?”

Illinois will take on Purdue at home on Friday at 7 p.m. during IlliniNOISE Night at Huff Hall. The team will face off against Indiana on Saturday for the second time this season at Huff Hall at 7 p.m.