Illini of the Week: Jaelyn Cunningham 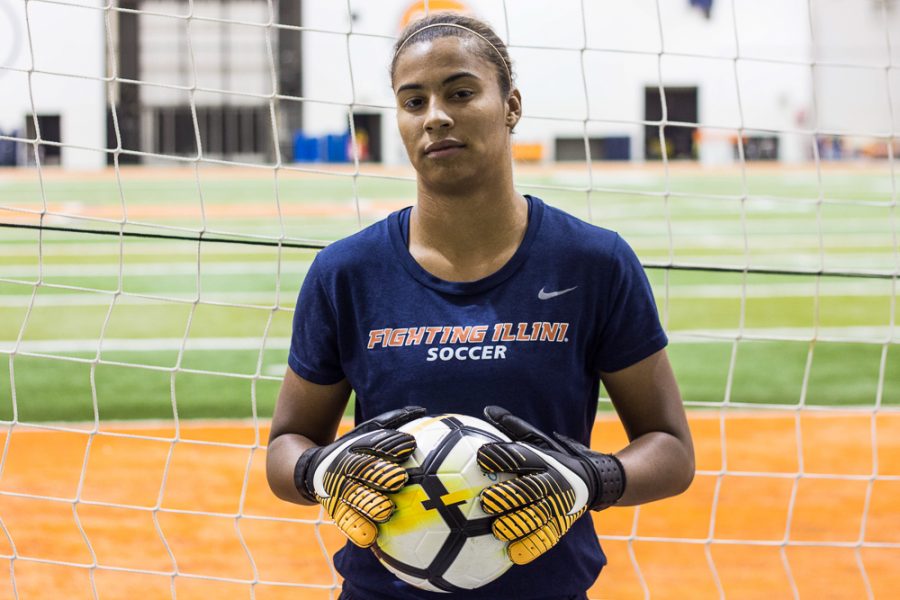 Most people believe being a goalkeeper in soccer is simple: you keep the ball out of the back of the net.

In reality, the skills required to be a great goalkeeper are not so straightforward. However, Illinois’ sophomore Jaelyn Cunningham is beginning to flash those traits.

Cunningham, who leads the Big Ten with 86 saves, is coming off of a clean sheet against in-state rival Northwestern where she made six saves.

“The big thing was to continue to be consistent,” Cunningham said. “I thought I made a couple of good saves, overall I was pretty happy with my performance.”

It seems that head coach Janet Rayfield’s preaching of a team-first mentality has rubbed off on her players. Cunningham granted praise to her teammates while also acknowledging that having to make the occasional spectacular stop is simply her role to the team.

“A lot of people in front of me do their job pretty well (and) it makes my job pretty easy.  I think that the credit goes to my backline and all the hard work they do,” Cunnigham said. “Sometimes I gotta make a big save and that’s part of my job, hopefully I can continue to make those.”

Cunningham has made more than her share of saves and credits that to her work put in away from game action. Specifically, she cited her goalkeeping coach, Nick Stirrett, with helping her improve in a multitude of facets.

“Me and Nick work pretty hard. I think he’s a big part of my success. And I think he will continue to help me become successful,” Cunningham said. “I think the conversations that me and him have are pretty important, definitely a credit to my success.”

Stirrett talked about the process of working with Cunningham on and off the field. He feels that striving to improve mentally has been the key in Cunningham improving to the Big Ten’s leader in saves.

“It’s a testament to her work, not just on the field but off the field,” Stirrett said. “In terms of her watching film, (and) giving attention to the mental side of her game, as we call it between the two of us, the invisible game.”

Stirrett elaborated on “the invisible game” and its role in developing quality goalkeepers.

“It’s the game that happens between your ears. We can talk about X’s and O’s, how you should place your hands, footwork, all those things, but at the end of the day there’s also that game of confidence, moxie, (and) courage that happens between the ears,” Stirrett said. “That’s such a critical part that’s neglected often in goalkeeping. I think that’s what sets good keepers apart from average keepers and elite keepers from good keepers.”

Rayfield continued to stress the importance of “the invisible game.” The value of anticipatory skills is clearly high among the Illinois coaching staff.

“The thing about goalkeeping is you train shot-stopping, but ninety percent of the game is trying to prevent that shot from ever happening,” Rayfield said. “That’s the invisible game, it’s not the ball driving at you, it’s your ability to process information.”

Rayfield specifically praised her goalkeeper’s evolution. Cunningham, who entered the program with athleticism as her most prominent attribute, has now become the leader of her backline.

“She’s maturing as a goalkeeper. Making saves is always something Jaelyn’s been able to do,” Rayfield said. “What she’s done now is expanded her sphere of influence beyond stopping balls to completely controlling the defense.”

Cunningham will surely be called to action in the games ahead, and if she can continue her clinical form, it will be further evidence that her work on the physical and mental side of her game is paying off.