Justin Reis steps up for Illini in wake of Ernsting injury 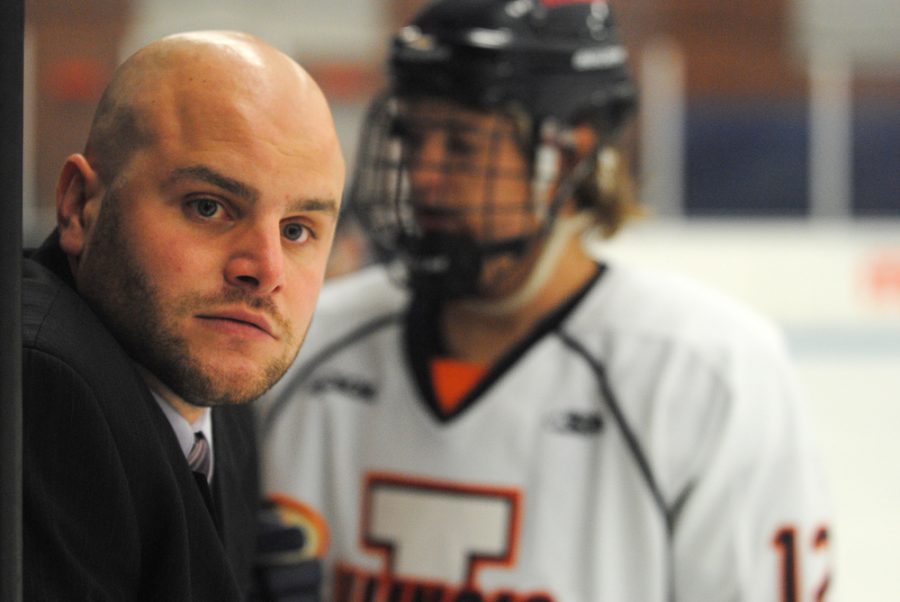 Head coach Nick Fabbrini looks to the referee for an explanation of a penalty call during the game against No. 2 Ohio at the Ice Arena Saturday night, November 3, 2012.

Freshman forward Justin Ries found himself moving up from the fourth line to the second last weekend against Northern Illinois.

While temporary, the move was a surprise to Ries since he was unsure if he was going to have a roster spot coming into the season.

“It was a big question mark for me whether or not I was going to get a spot on the roster,” Ries said. “It was definitely a surprise and was pretty cool to get that opportunity.”

Ries did well for himself in the two games against the Huskies, playing alongside senior forward James McGing and junior forward David Kellner. He scored his second goal of the season in the Friday night game.

The goal brought a spark to the Illini as they came out to a slow start, facing a 1-0 deficit for a majority of the first period until Ries fired a shot five-hole from the right faceoff circle.

From that point, the rest of the game was history.

Illinois head coach Nick Fabbrini was pleased with what he saw from the Orland Park forward.

“He’s stood out as a good offensive player and this weekend wasn’t really any different,” Fabbrini said. “He did pretty much what we were looking for him to do.”

Jumping onto a line with one player that already has 13 points through six games and another that has seven to his name can be a big adjustment, but Kellner felt that Ries did a good job meshing with him and McGing.

“(McGing) is a unique player to play with and he kind of understood it like I did,” Kellner said. “As long as you are playing structured hockey and are in the right (spot), you’ll be fine. He did a nice job.”

Fabbrini feels like Ries’ versatile play on the second line attests to the amount of depth his team possesses. He said he thinks a lot of guys could play in the top two lines.

Ries agreed with Fabbrini, saying the team is a pretty close-knit group and that it’s benefiting the Illini early in the season.

Ernsting is expected to return this weekend against McKendree University, which likely means Ries will return to the fourth line. However, he will not take his experience on the second line for granted.

“It was fun and pretty cool,” Ries said. “McGing is a good player and so is Kellner. Skating out there, they gave me a lot of opportunities and it was cool.”