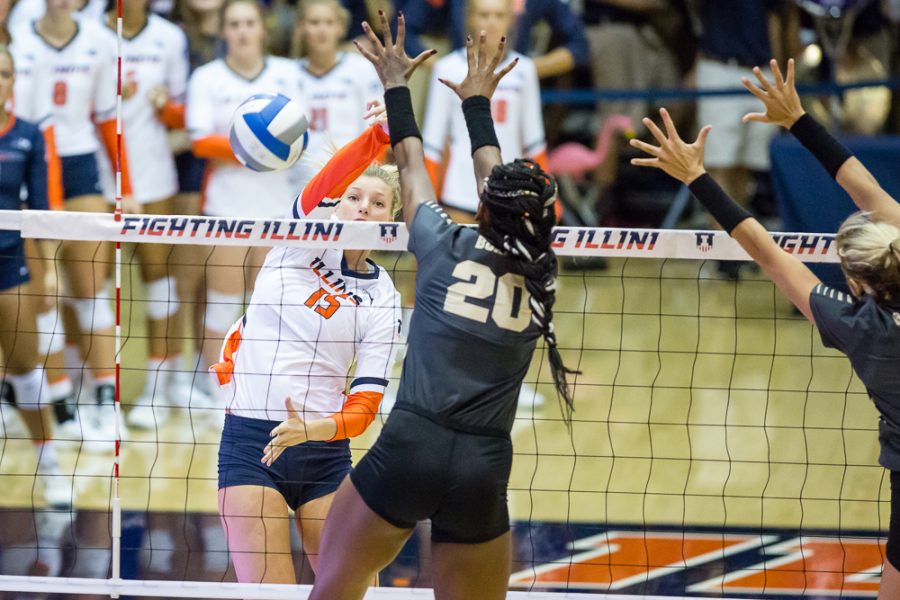 Illinois outside hitter Megan Cooney hits the ball during the match against Purdue at Huff Hall on Friday, Oct. 6. The Illini lost 3-0.

Illinois swept Ohio State and Maryland during its three-game homestand. Cooney recorded 19 total kills, averaging 3.17 per set over both matches. She allowed only four errors and hit at a 0.278 percent.

So far this season, Cooney has appeared in 55 sets and 17 matches. She is inching dangerously close to the 100 kills mark this season – she’s sitting at 99 currently. Overall, she is hitting at her season-best at 0.289 percent, averaging 1.8 kills per set.

Defensively, Cooney has aided the Illini with 18 total digs.

According to Cooney, the environment at practice is competitive. She said part of her motivation to do well on the court stems from her teammates’ energy.

“There’s been a lot of competing at practice,” Cooney said. “Every day we’re competing for spots; they’re never guaranteed. The energy in our gym at practice has really carried over into our matches.”

Leading up to her career at Illinois, Cooney led her high school team to three consecutive Sub-State championships in the Topeka, Kansas, area. She also received All-America Second-Team accolades from the American Volleyball Coaches Association as a senior.

Coach Chris Tamas said Donnelly is in rehabilitation for the injury and will return when she has recovered.

“As soon as she’s ready to step back onto the floor, we’ll put her back on the floor,” Tamas said. “She’s going to continue as is but she’s working as hard as she can to get back out here with the team.”

In her place, O’Brien had 12 digs against Indiana, six against Ohio State and 14 against Maryland. Overall, she has 20 assists and 103 digs on the season so far.

Specifics regarding Donnelly’s injury have not been disclosed. Tamas has not announced an approximate date for her return.

A lot has changed for Illinois over the past week. Fresh off of a three-game winning streak, the team moved up three spots to No. 19 among NCAA Division I teams.

Illinois currently sits fifth in the Big Ten. The Illini are 6-2 in the conference behind Penn State, Nebraska, Minnesota and Michigan State, respectively.

Junior middle blocker Ali Bastianelli is still leading the NCAA in in average blocks per set at 1.80. She leads Texas’ Chiaka Ogbogu by 0.09 blocks.