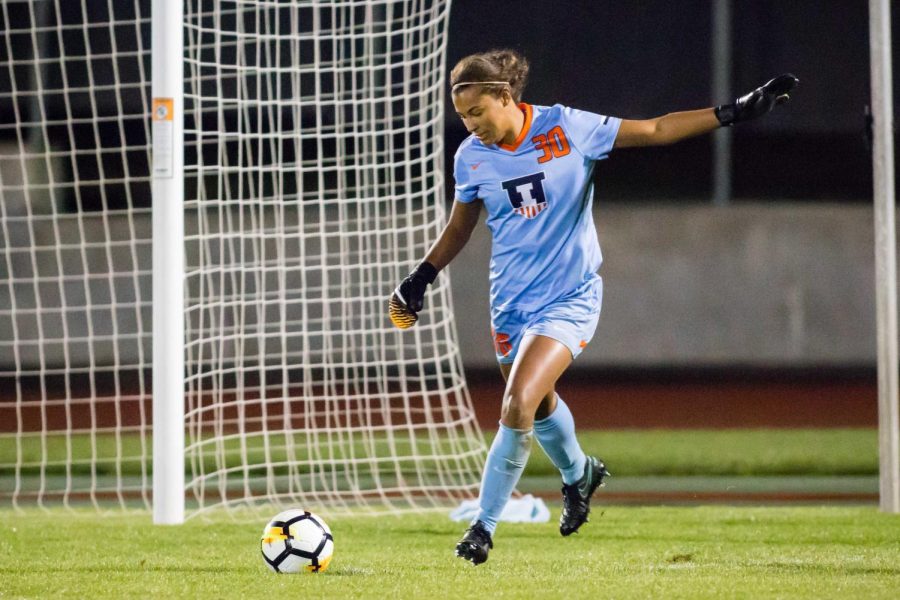 Illinois goalkeeper Jaelyn Cunningham takes a goal kick during the game against Northwestern at Illinois Soccer Stadium on Saturday, October 7, 2017. The Illini won 1-0.

As the whistle sounded on a 3-0 victory for the Michigan women’s soccer team over Illinois, the Illini could not believe that such a tight game ended with such a misleading scoreline.

After a back-and-forth first half that ended with no score — despite both teams registering seven shots — the teams remained deadlocked through two-thirds of the game.

The final 20 minutes proved how quickly a game can turn on its head. Wolverine junior Reilly Martin made her way into the box, spun and fired a shot past Illini goalkeeper Jaelyn Cunningham.

This would open the floodgates for Michigan. Senior Ani Sarkisian marked her final home game with a goal from the penalty spot just four minutes later.

Junior midfielder Abby Kastroll added a late goal off a Sarah Warren deflection, and just like that, Illinois was down 3-0.

Head coach Janet Rayfield said her team’s late demise was not the main takeaway from the performance.

“I thought we started this game as strong as we had any game this season. We started strong, created some great attacking opportunities,” Rayfield said. “In the second half, Michigan came out strong and late in the half we missed the experience of Alicia Barker. The last twenty minutes and the score is not reflective of the game that we played. We had some chances to score goals that would’ve really made a difference in the game.”

Rayfield lamented the absence of Baker. She believes her leadership and communication skills are essential to the Illini’s success.

“You need a relationship between your goalkeeper and your center back, especially the center back who takes care of a large portion of the vocal leadership,” Rayfield said. “Alicia is who we’ve looked to all year to be the focal point. You mix that up and the vocal leadership is shared, and it’s not quite as cohesive.”

Baker is likely to return to Illinois’ lineup Wednesday against Iowa, and Rayfield feels her defensive skills will aid her team’s attack. She also believes her team needs to focus on putting the pressure on opposing defenses before the team falls behind.

“Like all season, we have to do better with the opportunities that we have, and put teams in the position where they have to score goals instead of us, and then we have to be consistent in our defending for 90 full minutes, certainly putting Alicia Barker back in is gonna help that.”

Although the Illini suffered a third-consecutive loss, they were able to create more chances than in previous defeats. The 10 shots Illinois registered were a sign of improvement, as the team only had 11 in its previous two games.

Another positive sign for the Illini came when Jaelyn Cunningham’s six saves brought her to 103 on the season, making her the fourth player in program history to record 100 saves in a single season.