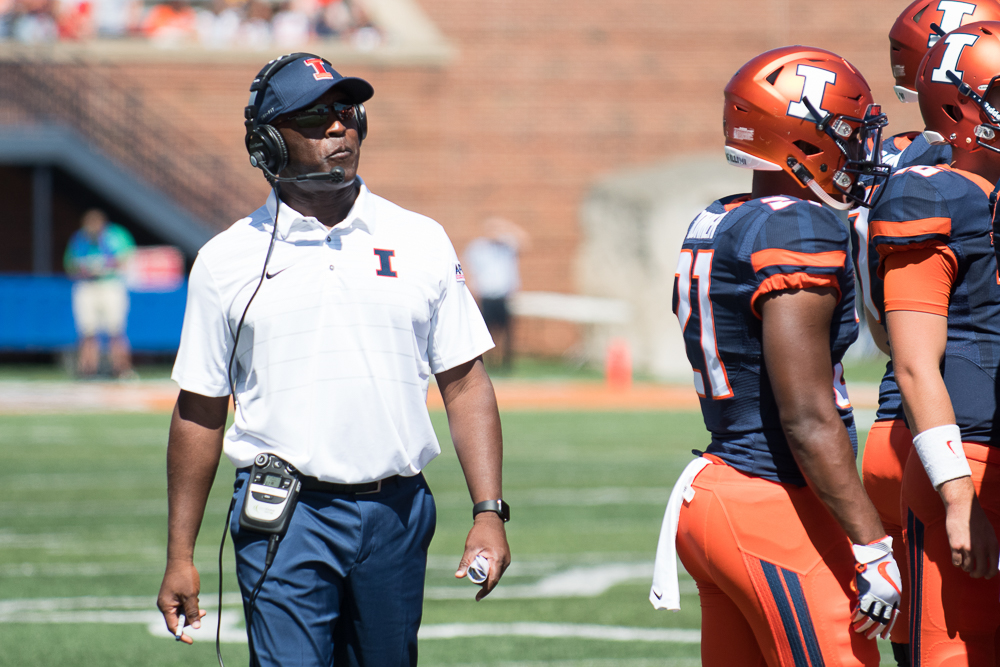 Bennett Williams was all over the field Saturday against Minnesota.

The freshman safety recorded 14 total tackles and a forced fumble.

Defensive coordinator Hardy Nickerson said he was impressed with what Williams gave the team.

“(Williams) did some things that say ‘Hey, I think he is on the right track,’” Nickerson said. “He’s doing some things we want him to do and making plays that we expect a player like him to make.”

Williams is second on the team in total tackles with 43. He trails only Del’Shawn Phillips, who has recorded 45 this season.

Head coach Lovie Smith said he has utilized Williams at the free and strong safety positions this season. No matter where he has played, Williams has not disappointed the coaching staff.

“He started out at free safety for us; he’s a very intelligent football player, and he really does get it,” Smith said. “His strong suit has been playing the pass up until the past couple weeks. We’ve played him at the strong position, up into the box a little bit a more, and I think he did a good job.”

Smith did not clarify if Williams will be used as the strong or free safety in next week’s matchup against Wisconsin.

Lovie Smith preached taking the ball away when he first arrived on campus. He wanted that to be the mantra for the future of Illinois football.

His players have responded well to his words.

Illinois continued winning the turnover battle against the Golden Gophers, taking the ball away three times.

Williams forced a fumble in the first quarter that defensive lineman Jamal Milan recovered. The takeaway led to an early Illinois touchdown.

Defensive back Stanley Green caught a tipped ball near the Illinois end zone and returned it 19 yards in the third quarter.

On Minnesota’s next possession, Cameron Watkins read Croft well and made an acrobatic catch near the sidelines to pick off the quarterback.

Nickerson loved seeing his unit taking after the words of the head coach.

“We talk a lot about takeaways, getting to the ball and getting the ball out,” Nickerson said. “The fastest way to change a football game is taking the ball away, and we want to keep that going.”

Any hopes of redshirting Cam Thomas this season were dismissed when he took the field in the middle of the first quarter.

Thomas led the Illini on a two-play, 15-yard drive to tie the game early.

The coaching staff said Thomas has a long way to go to understand the playbook and different schemes he will see, but they thought he did a good job Saturday.

“He did well; he’s another example of our level of recruiting that he adds to this class of guys who have been playing,” offensive coordinator Garrick McGee said. “He’s a talent, under control and very mature for his age.”

Illinois was down seven with a little over four minutes to go in the game when Thomas was picked off on the first play of the drive.

McGee said he took full responsibility for the interception by putting Thomas in that spot with the play call.

Thomas finished with two completions for 33 yards while rushing 10 times and leading the team with 79 yards.

“(Thomas) gave us a little boost,” Smith said. “Of course running the football, and he made a few good throws, too. First time out, some freshman mistakes, but something to build on.”