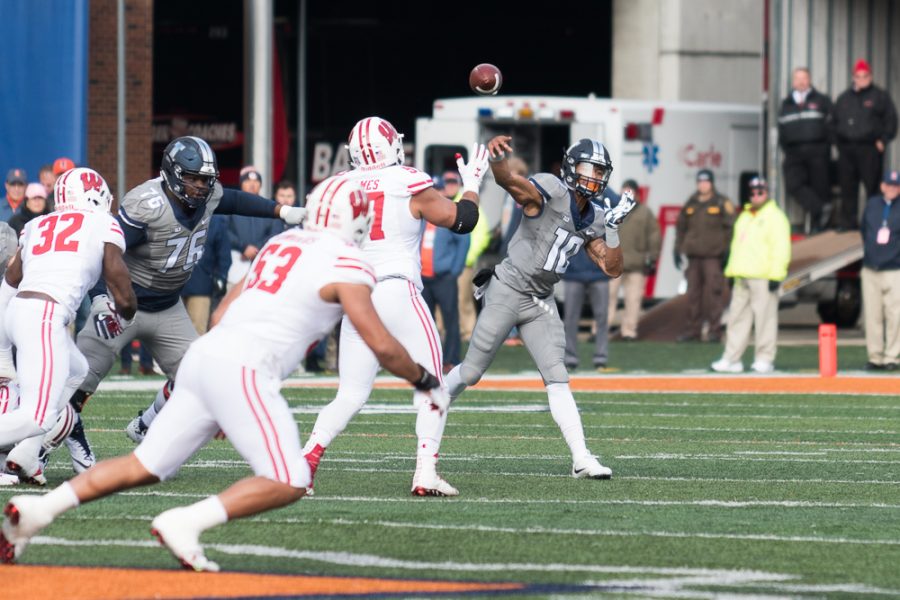 Illinois quarterback Cam Thomas throws a pass during the Homecoming game against Wisconsin on Saturday. The Illini lost 24-10.

The Illini offense brought more of the the same in its loss to the Badgers on Saturday.

The Illinois coaching staff continued rolling with a two quarterback system, going with Cam Thomas and Jeff George Jr. to face the No. 5 team in the country.

“I thought for the most part our guys played well,” coach Lovie Smith said. “We went against an outstanding defense and couldn’t establish the run. We just didn’t have enough consistency to win.”

Thomas’ first drive did not go the way he had hoped. He threw two incompletions and an interception following a Wisconsin three-and-out.

The freshman responded better in his next drive, highlighted by a 29-yard completion to Malik Turner, but the drive stalled before the Illini could put points on the board.

He finished with seven completions for 44 yards and two interceptions. The freshman has three interceptions on the season. He added 78 rushing yards.

George was not much better.

The sophomore took too much time to throw the ball on a third down play in the second quarter that resulted in a sack and fumble.

The turnover led to Garrett Groshek’s run of two yards to put the Badgers up 14-0. Rafael Gaglianone also hit a 52-yard field goal to end the half.

The Badgers also outmatched the Illini in time of possession, holding the ball for just over 32 minutes.

Playmakers like Mike Dudek, Malik Turner and Louis Dorsey were all held in check with the lack of success in the passing game.

Freshman wide receiver Ricky Smalling was also held to just one catch. Smalling had 226 receiving yards over the past three weeks coming into Saturday’s game.

The running backs also found few holes to exploit. Kendrick Foster got his first start since the team’s opening game against Ball State. The senior finished with 15 carries for 66 yards and a touchdown.

“It was nice to get that first touchdown, but at the end of the day, it’s about the team, and we lost,” senior Kenrick Foster said. “Defense played a heck of a game, and offense just has to convert on those turnovers, and I put that on me.”

Sophomore Reggie Corbin had four carries and rushed for 18 yards.

The offensive line played a clean game and gave both Thomas and George enough time to get rid of the ball.

The Illini defense kept the team in the game, though. Del’Shawn Phillips and Stanley Green were all over the field, keeping opposing running back Jonathan Taylor in check.

Tymir Oliver recorded a sack and a tackle for a loss as well.

Bennett Williams also picked off Wisconsin quarterback Alex Hornibrook. He said he was impressed with the defense today.

“Me and Stan (Green) came out and we were like ʻman, let’s go hit and hit,’” Bennett Williams said. “Seeing Stan all game completely pumped up after every play, I was like ‘if he can do that, why can’t we?’”

Taylor finished with 12 carries for 73 yards.

Offensive lineman Michael Deiter topped off the Wisconsin victory with a four-yard run after receiving the backward pass from quarterback Alex Hornibrook.

“We’re so close, and I hate saying that word, but it’s just evey week, we keep getting closer and closer,” wide receiver Malik Turner said. “We can feel, but we just haven’t made that step yet.”