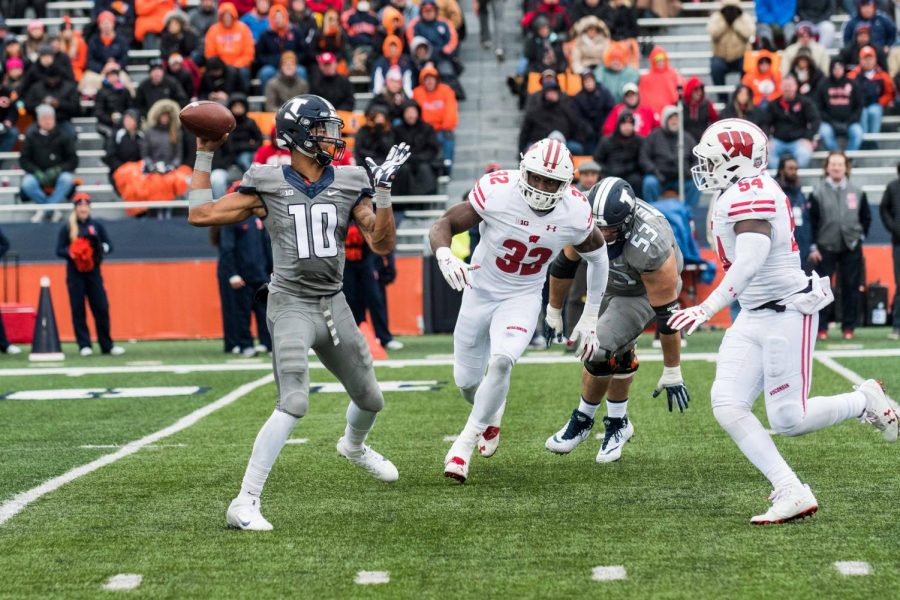 Illinois quarterback Cam Thomas throws a pass on the move during the game against Wisconsin on Oct 28. The Illini lost 24-10.

The Illinois football coaching staff understands that its two-quarterback system will take time to progress into success.

Freshman Cam Thomas saw his first action of the season in the Illinois’ game against Minnesota on Oct. 21.

The redshirt gave the Illini a small spark, leading them to a touchdown on his first drive; however, he struggled the rest of the game.

More of the same was evident in last week’s loss to Wisconsin. Thomas was a force on the ground, rushing for 78 yards on 10 carries, but he threw two interceptions.

Offensive coordinator Garrick McGee said he is asking a lot for Thomas to step in at this point of his college career.

“I know we want to see him have success while he’s learning and growing, but that’s not necessarily reality,” McGee said. “He’s learning so much on the field and how to prepare and compete. We recruited all these guys to come here and play, and that’s what we told them in recruiting, but it really happened.”

Jeff George Jr. has also received roughly the same amount of playing time as Thomas. George has given the Illini a pocket-passing threat to match Thomas’ rushing abilities.

The sophomore said he also needs to work on his game to get Illinois its first win since the Sept. 9 game against Western Kentucky.

Illinois ranks last in the Big Ten in scoring offense and has not put up more than 24 points in a game this season. The team has scored only 14 touchdowns.

The Illini are also in front of only Rutgers in total offense, averaging 309 yards per game.

George finished Saturday’s game with seven completions for 108 yards and knows he needs to be better.

“There were plays out there (against Wisconsin) that I feel like could have been game-changers,” George said. “I need to take advantage of those plays and make sure they happen.”

While George won’t impress many with his speed, Thomas is one of the fastest athletes in college football.

He runs a 4.6 second, 40-yard dash and has given fans glimpses of what he can do in the open field when he finds some space.

The freshman realizes his passing game needs improvement, but the coaches have given him specific areas he can address in practice.

“I really need to work on not letting my eyes come down to the defensive linemen,” Thomas said. “I’m supposed to be watching the defensive backs and seeing where everybody is. Once I can get over that, I think the passing game will really open up for me.”

Thomas’ first defenses he has faced have not been against a Mid-American Conference team, but rather, proven Big Ten units.

“Yes, it’s built in that you’re going to make some young player mistakes,” Smith said. “We were able to move the ball a little bit on the ground. A lot of that was him. So a lot of things he did well running the football, but there’s no other way around better throws and decisions in the passing game.”

Smith said the two-quarterback system has shown signs of working, but it’s not where he wants it to be just yet.

“In an ideal world, you want one quarterback to play the entire year, but a lot of times it doesn’t work out that way,” Smith said. “We’re doing it to win games, and we haven’t won any.”