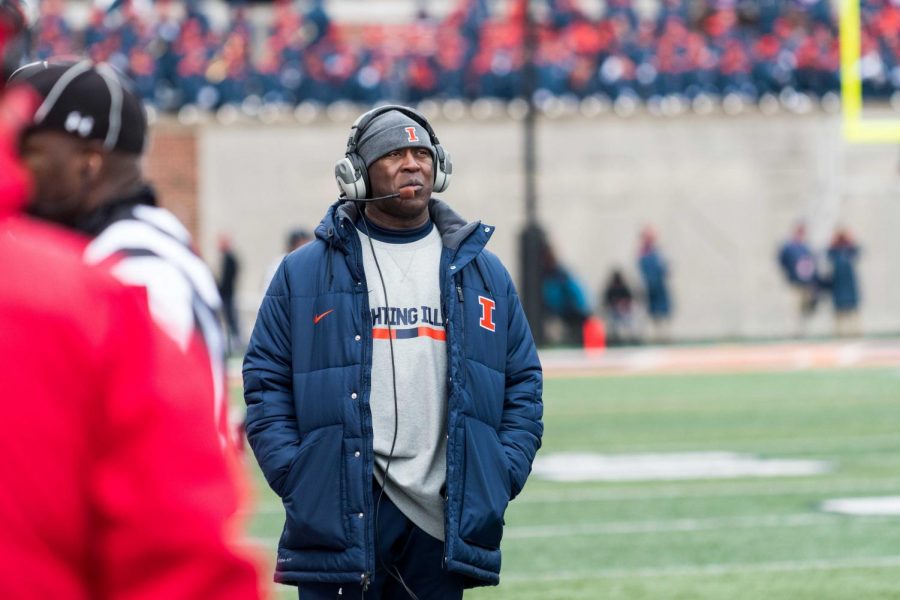 Illinois head coach Lovie Smith looks out over the field during the game against Wisconsin on Saturday, Oct 28. The Illini lost 10-24. 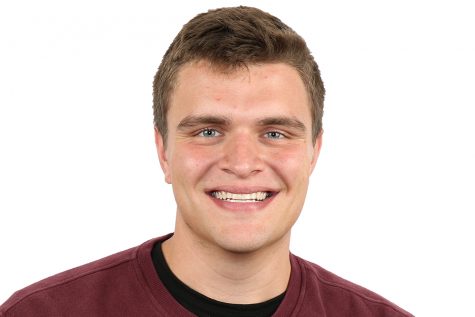 Halloween is officially over, which means it is officially Christmas. Don’t try to tell me differently. This is how this works, and my mind will not be changed.

If you are an Illinois sports fan, you have another reason to be excited apart from the normal jolliness that comes with the Christmas season. There are a lot of teams at the University of Illinois that are ready to bring Christmas cheer.

I’m starting with football because they are the most unique case. Right now, pretty much the only thing Lovie Smith’s team has given out are IOUs. That is OK though, because everybody knew it would be a while before the Illini football team would be giving out a lot of gifts. It is your friend that doesn’t have enough money for gifts right now, but you know that very soon they are going to break through and have enough money to be slinging presents left and right. That is Illinois football.

Currently, Illinois football is also that friend that you’ve drifted apart from recently, so you aren’t expecting any presents from them and therefore you aren’t planning on giving them anything. This football season has been a trying one for fans. They have seen three different quarterbacks, a load of injuries and a massive freshman class that hasn’t quite been able to play at a consistently high level for the Illini to win games in the Big Ten. But, with their season winding down, the Illini have a few winnable games left. Actually, if it wasn’t for those Grinches over at Ohio State, the Illini would have a shot in every game to finish out the season. I am not saying it will win, all I am saying is that the Illinois football team might just be that friend that surprises you with a gift this holiday season.

The Illinois volleyball team is ready to give out some great presents as it gets ready for Christmas. This is a team that has tons of holiday spirit. On Halloween, they all came to practice in costume, including coach Chris Tamas. The Illini are ranked No. 25 in the nation and are sixth in the Big Ten. After  the Big Ten season is over and the conference ceases beating up on each other, the Illini have the capability to gift their fans with a run in the NCAA tournament. The relationship that fans have with the volleyball team is just like the relationship you have with your grandma. You know you are going to get something, it is just a matter of if you are really going to like it or not.

This is the big one. Illini fans are looking at this basketball team as if he is the Jolly Ole’ Saint Nick himself. This new era of Illinois basketball has been hyped beyond belief, just like Christmas morning is every year. Every Christmas there are tons of new toys at every store, and this year there are tons of new players on this Illinois roster. Fans have no idea which ones will be the best ones, but they are excited for every single one of them.

When you were little, you expected the most from Santa Claus every Christmas, just as fans are expecting the most from the Illinois basketball team this year. Fans have their list. At the top of that list is a tournament appearance. I guess it really just depends on if Brad Underwood checks it twice.

If I had to compare the women’s basketball team to one family member during Christmas time, it would be your little niece or nephew. The one that is 5 years old and gets you the most pointless gift but you love it anyway just because they thought of you. The women’s basketball team has been in a huge rough patch the past several years, and it is by no fault of the players. Now the program has been reset. By no means should Illini fans be expecting something incredible from this team. They should be happy just to get something. When your niece or nephew gives you that gift, you return the favor with a gift that they are going to love. It is time for Illinois women’s basketball to get some love. The program has gone through way more than its fair share of struggles.

This will be the last sport I cover. I know there are way more, but I just can’t fit all of them into this one column. The Illinois wrestling team needed to be in here, though, because it has by far the easiest comparison to make out of every team. The wrestling team is that aunt or uncle who takes you to the store to buy exactly what you want. That right there is Isaiah Martinez. He is too good. He pretty much guarantees that the Illini faithful will get the best presents, just like that aunt or uncle who takes you to get your own presents. Nobody knows exactly what you want more than yourself.