Illinois defeats Northwestern with the return of lone senior 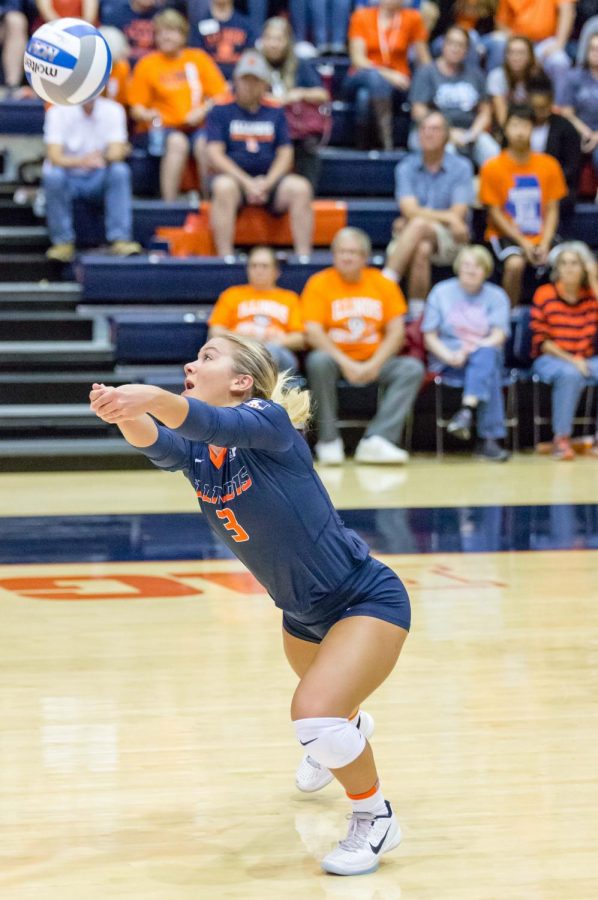 Illinois defensive specialist Brandi Donnelly (3) passes the ball during the match against Purdue at Huff Hall on Oct. 6.

After running through full warmups during last week’s match against Penn State, Donnelly showed signs that her time on the bench was coming to a close. According to head coach Chris Tamas, Donnelly was cleared Monday for what was classified as a “knee injury.”

“I was just so excited during the starting line ups and everything,” Donnelly said. “It was weird because I only had 2 1/2 practices. I kinda felt like a freshman again, like all giddy and kind of nervous, so it was cool.”

While her fellow Illini adjusted to Donnelly being back on the court, the senior capitalized on defensive opportunities throughout the match. She led the Illini with 14 total digs.

“We’re just glad to have her back,” Tamas said. “(She was) a little bit rusty to start off, but she was pretty edgy to get back in there. We were able to do well with her in there, and as the match went on, she go better. ”

Illinois breezed through the first and third sets, winning by seven and 10 points, respectively. But a tight second set saw the Illini rally from a three-point deficit. They grabbed the lead with six consecutive points, pushing the set to 22-20. The game was capped off with three lethal kills for the Illini.

According to Tamas, coming from behind in game settings is a skill his team has been perfecting all season. Despite offensive efforts from Northwestern, Illinois made smart plays in the second, said Tamas.

After hard-fought losses to the top three teams in the Big Ten last week, the Illini cruised ahead of the Wildcats. Tamas said the team was sharper defensively Wednesday night than they were against teams last week.

“I think once you get up 2-0, there’s even more of a sense of urgency to finish off matches,” Tamas said. “I think we did a better job of our set up without block, I think we stuffed them four or five times in the first 12 points, and that’s really disheartening to a team.”

Freshman Tyanna Omazic led the Illini with a career-high of 11 kills and a 0.714 hitting percentage. She recorded only one error over her 14 offensive swings.

She said her technique at practice payed off and gave her shot opportunities against the Wildcats.

“I just work every single day in practice just being up early in the air,” Omazic said. “So that really worked for me today, just constantly getting up in the air.”