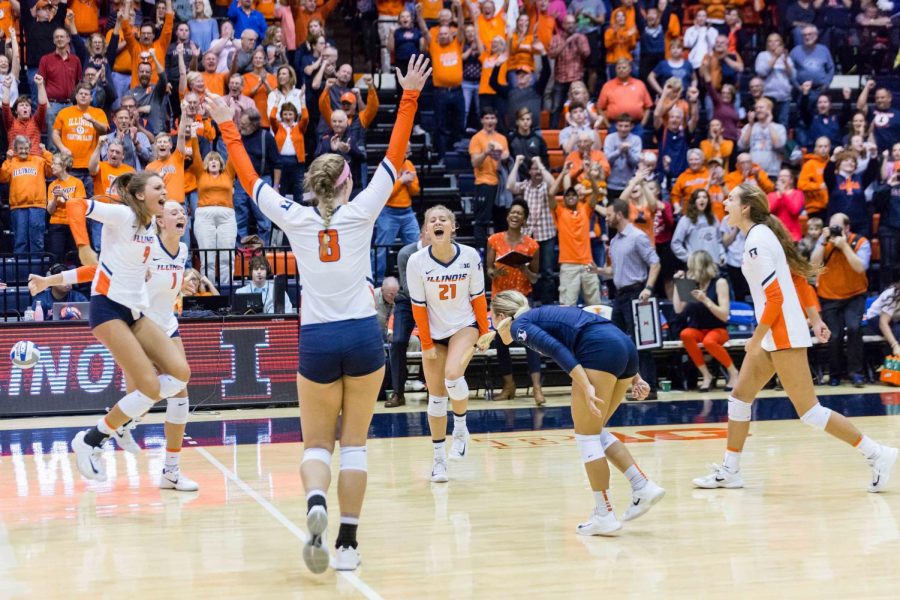 Illinois dominated the beginning of the game, jumping out to a 2-0 set lead. It seemed as though it would be a short night for Michigan as the teams broke the huddle for the third set.

However, the Wolverines came back,  led by junior Carly Skjodt’s 22 kills.

After seizing the momentum from taking the opening two sets, the Illini were suddenly staring at a tie game, with a fifth set looming.

Michigan’s comeback was  short-lived, however. Illinois responded and took the decisive set 17-15.

“We gutted one out there. We went up 2-0 early on and Michigan made some changes, and we knew they would keep coming at us,” Tamas said. “I told (the team) from the outset it’s about how much we’re willing to battle, and to pull that one out in the end was a really gutsy performance.”

For Illinois, sophomore Beth Prince’s performance stood out as the difference between the two teams. Prince led the game in kills with 26, although she felt the win came down to the effort of the team as a whole.

“Jordan (Poulter) was putting the ball in a really good place. We had a really great dialogue going, so if something fell off, we were talking about it right away,” Prince said. “Our passers were passing great balls, and when the middle is holding a block and I can be one-on-one, I wish could give half of that kill to the middle for holding that block for me.”

Early on, it seemed as though Illinois would make quick work of Michigan, but the Wolverines battled back to make things close. Reflecting on the Wolverines’ comeback, Tamas felt that it was a combination of his team’s mistakes as well as Michigan’s adjustments.

“I thought we eased up a little bit, thinking they would just go away. I know Michigan’s team well enough to know they were gonna come at it even harder,” Tamas said. “They had a nice run in the fourth (set), but nice to see that we went to fifth to pull it out.”

As Illinois prepares to take on Michigan State next Friday in East Lansing, Tamas doesn’t want his team to lose sight of the game fundamentals.

“It’s always the simple things: serve, pass, play good defense, make sure we’re zoned in our scouting reports,” Tamas said. “I thought we had a good week of preparation, and it’s just about doing the basics really well.”

With their recent string of consecutive victories, the Illini look to be firmly in the picture for an at-large bid to the NCAA Tournament. After missing out a season ago, qualification for this year’s dance will certainly be seen as progress for the program in Tamas’ first season at the helm.