Helping the Illini battle the best 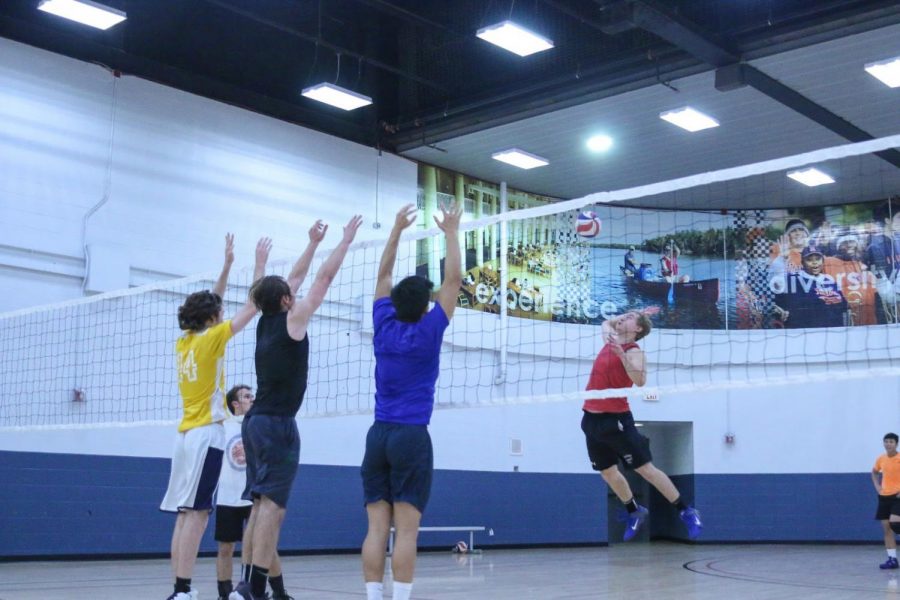 Kyle Biedron, Junior, spikes the ball during an Illini men’s club volleyball practice at the ARC on Thursday November 2, 2017.

Big Ten volleyball, like many Big Ten sports, is a battle of the best. With three of the top-five teams in the country battling for the conference title, teams have to use all of their resources to win.

Men’s club volleyball players at the University help out their female counterparts in the gym. Currently, the Illini use five men’s club members as practice players throughout the week.

This year marks a significant change in Illinois volleyball with the new coaching staff. But senior Jimmy McCabe has been practicing with the team for four years, and he said that despite the transition, he still enjoys working with the women’s team.

“I was here with the previous coach, Kevin Hambly, and there were about five assistant coaches that were here,” McCabe said. “Seeing all of the change that’s gone on has made the program better, but I really enjoy it, that’s why I keep doing it.”

McCabe began his career as a practice player for the women’s squad during his sophomore year. His mother currently plays and coaches volleyball, which has helped foster a lifelong love for the sport in him. McCabe said he played throughout high school, but wasn’t recruited due to his shorter, thinner build at the time.

In addition to the Illinois men’s club team, he said he hopes to continue to play in the coming years.

“Right now, I’m thinking about doing a master’s program,” McCabe said, “where you can go play internationally and get a master’s degree. It’s for grad students who go abroad.”

Practice players are utilized to mimic opponents that the women’s team will see on a weekly basis. With the Illini’s tallest player standing at 6-foot-4-inches, the team might have trouble preparing to take blocks from players like Wisconsin’s 6-foot-8-inch freshman Dana Rettke.

“Sometimes there are just other players that are bigger, faster, stronger than what we have across our roster,” Tamas said. “So they just give us the ability to get a better look at the opponent during the week, and are able to prepare us better than film alone. Also, (they) just get us used to digging a faster ball and seeing something that’s higher.”

“We see a lot of the same types of players in our conference, so they just add a huge benefit, not only through preparation, but they’re good guys, too,” Tamas said. “They help us out with keeping the atmosphere light and fun, but they also compete really hard. Our girls have to earn every point they get.”

Taller men’s players like McCabe find themselves filling in along the net at positions like outside hitter and middle blocker. He said the height difference among players could be the difference of winning or losing a match.

“I’m tall, so I take the role of all the (taller) girls they go against,” McCabe said. “The Big Ten is the best volleyball conference in the country for women’s volleyball, so they see girls that are my height, 6-foot even, or even taller than me. Being blocked so many times in a row can really hurt, especially when you don’t have the height to practice with.”

However, this practice trades off benefits for both sides. McCabe said the extra time in the gym has allowed him to sharpen his skills and become a better player as well.

“I get a lot more reps, and I get the chance to work with good coaches,” McCabe said. “Even though they’re not always focused on me, because they’re focused on their players, it gives me an opportunity to learn from them, or vice versa.”

Practice players are expected to attend every Illini volleyball practice, which can extend to three or more hours at a time, in addition to the club’s regular practice twice a week.

According to Tamas, he contacted the club team about practice players at the beginning of the season. The men’s club team has no coach, so all coordinating is done between students and Illini volleyball coaching staff.

“They have a guy who runs the whole thing, and I contacted him when I first got here,” Tamas said. “But I said, ‘Hey, I want to get three or four guys in the gym, and can you help out (the scout team)?’ I talked about being competitive every day, doing everything you need to do to be good in this game, and they do. They come in on their own time and volunteer their time, and they do a really nice job.”

Junior transfer student and former Division III men’s volleyball player Alec Horne said he didn’t know what to expect when he agreed to become a practice player for the first time this year.

“It’s kind of a different game, because it’s so much quicker and more fast-paced than ours, so it was a little bit of a transition, but it for sure helped me with quickness and everything,” Horne said. “I assumed they were going to be good because they’re a D-1 program, but then I stepped in and these people are comparable to a lot of really good guys that I know, so their defense is so good.”

Whether you’re a Division I player or a club member, a love for the game is what keeps you coming back for more. Tamas said that as a former men’s player, he hopes the club players will gain something from his practices.

“They hear a lot of mantras in the gym and hopefully it helps with their game,” Tamas said. “Hopefully they’re picking up a few drills and hearing what I think is valuable, and I told them if they ever needed help, I might stop by a practice and give them help.”