Thomas performs well for coaching staff, Nickerson out for now 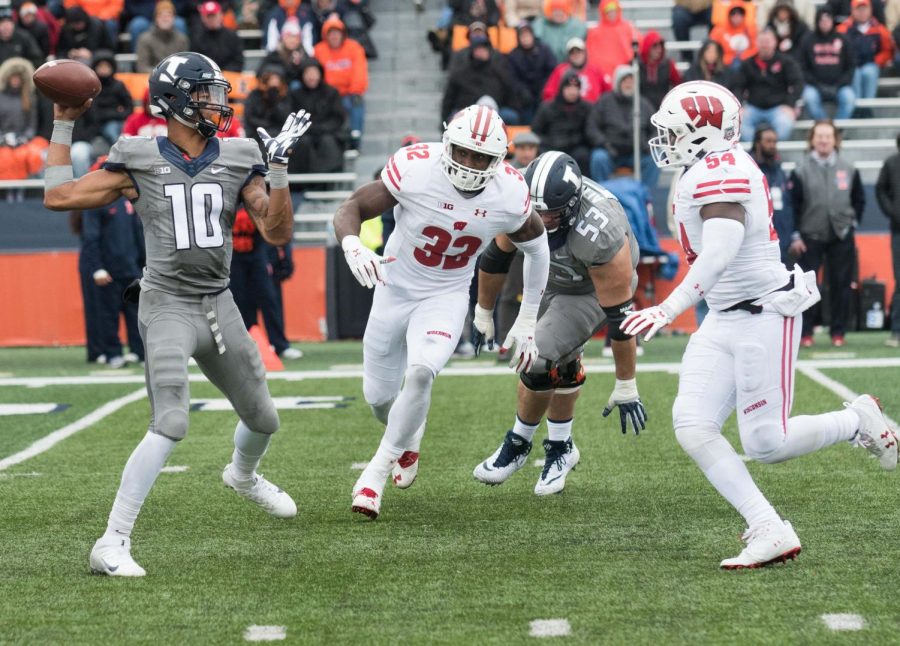 Illinois Quarterback Cam Thomas throws a pass on the move during the game against Wisconsin on Saturday, Oct. 28.

The Illinois football coaching staff has enjoyed what it has seen from true freshman Cam Thomas.

Head coach Lovie Smith said he has been impressed with what Thomas has provided the team since receiving playing time in week seven.

“Cam Thomas took a step (against Purdue),” Smith said. “There are a couple passes we would like to have back — all weren’t his fault — but he gave us a chance with some of the things he did, running the football and passing, too.”

Smith hinted at Thomas getting another start against Indiana this weekend.

“I think if you just look at the trend … he’s gotten a little, and then more and more, and got most of the reps last week,” Smith said. “I talked about the good things he did in the game; I think you can see where we’re heading.”

McGee said he enjoyed seeing Thomas’ maturity in the passing game, recognizing when a play wasn’t there downfield and making checks to gain yards.

“He graded out really high with his technique and decision-making,” McGee said. “He was competitive, he was accurate with the ball. We just need to make some plays for him down the field.”

McGee also noted that he can’t think of any instance in the game when Thomas was close to turning the ball over.

“You want the quarterback that’s out there to want the ball in his hands,” McGee said. “He’s one of those guys. I just can’t say enough about him.”

Smith opened his press conference Monday offering his thoughts and prayers to the victims of the church shooting in Sutherland Springs, Texas. Twenty-six people were killed.

Smith is from Texas, and said that church should be one of the safest places to be with family members.

“Our thoughts and prayers should be down in Texas again,” Smith said. “You assume on a Sunday, you go to church. That should be a safe haven for you to worship, but, unfortunately, that is not where we are right now.”

Defensive coordinator Hardy Nickerson will be out temporarily due to his mother passing away unexpectedly Sunday night.

The head coach does not have a timetable for Nickerson’s return.

“He won’t be here today,” Smith said. “We’ll kind of work around the schedule this week.”

Smith said he has not determined who will take over the defensive play-calling duties should Nickerson miss the Indiana game.

The sophomore added another five tackles to give him 11 in the past two weeks.

Smith said he believes much of his success has come due to his more consistent playing time.

“If you stay in the game and keep plugging away and correct the mistakes you have been making, you will eventually get over the hump,” Smith said. “Jamal Milan has a lot of ability. I think he is a legitimate inside lineman.”