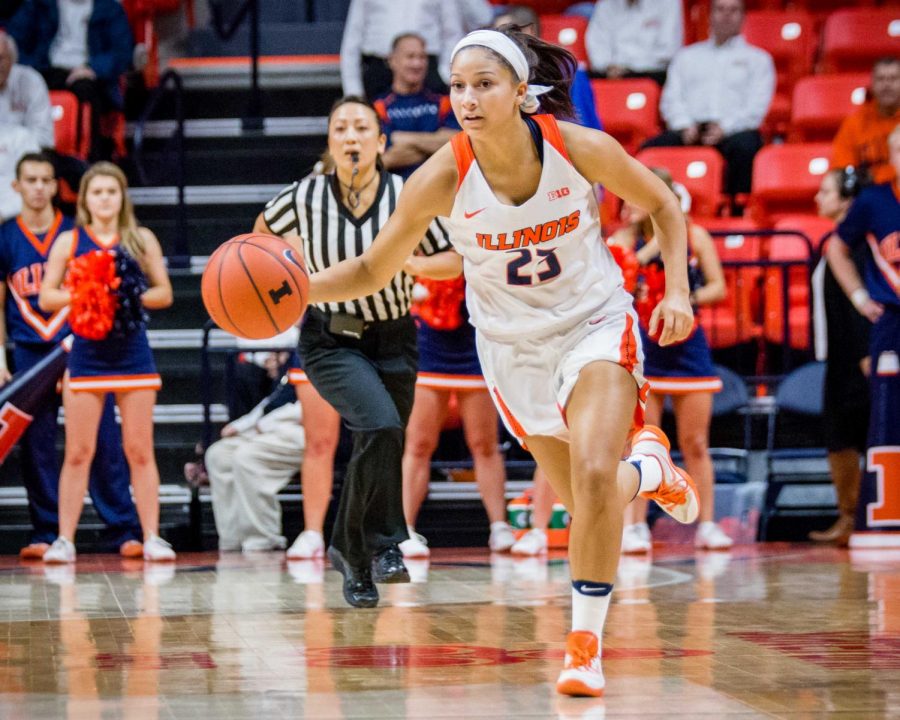 Illinois’ Jaelyne Kirkpatrick dribbles the ball down the court against Wake Forest on Nov. 30. The team opens its regular season this Friday against Fort Wayne.

At the dawn of new head coach Nancy Fahey’s tenure, the Illinois women’s basketball team is aiming to improve upon its 9-22 finish last season — one page at a time.

As the Illini approach their first regular season game Friday against Fort Wayne, players are reflecting on the recent team transformation and settling into Fahey’s style of coaching.

Junior guard Jaelyne Kirkpatrick said the months leading up to the season have been filled with heavy lifting and reading.

“Off the court in terms of weight training, preseason included a lot of heavy lifting and trying to put on as much muscle (as we could) before season,” Kirkpatrick said. “On court, Coach had us read a book called ‘Grit.’ First, for the mental side of it all. It’s a new system, we had to start from the bottom with it.”

Ringing in a new season with summer reading isn’t a new concept for the Illini, however. Sophomore guard Courtney Joens said reading the book helped the team get up to speed with their new coach.

“Last year we read one book in the summer, but it wasn’t as detailed as it was this year,” Joens said. “This year we had to take notes and have meetings about the book and everything. And it really has helped us become a grittier team, and that’s been one of our goals and statements that we’ve been trying to live by.”

Fahey is a member of the Women’s Basketball Hall of Fame and has 32 years of experience coaching. Most recently, she led Washington University in St. Louis to a Division III National Championship. She is the fastest coach in the NCAA to collect 600 wins, which she did after her 706th game during the 2011-12 season.

Fahey said her team has a lot to work on as the season begins this week.

“No coach is ready right now. I mean, I think every coach wants to work on stuff,” Fahey said. “You’ve got to perfect it, but I mean, we’re teachers, and teachers just keep wanting to teach. But there’s a point where we have to compete, and that’s why we’re ready.”

As Illinois settles into the season, Fahey said she wants the team to use lessons it learned in the offseason. “Grit” and the ability to compete will be recurring themes this winter.

“We want to be competitors every single time we step on the floor,” Fahey said. “I think that’s something I hope that we have, and if people come into our gym or watch us play, that’s really who’s evaluating that.”

According to Fahey, there have been no starters set for Friday’s game. She said the team has been trying out different combinations in the preseason.

“I think we’re definitely playing with schemes of people and adjusting,” Fahey said. “We’re still working to that, I think there are some kids that have started, you know Brandi (Beasley) and Alex (Wittinger) have started in the past, so yeah, we have to have anchors.”

Sophomores Beasley and Petra Holešínská are among a handful of Illini that appeared in all 31 games last season. Wittinger, a junior, played in 29 of those games.

But Kirkpatrick said Fahey isn’t just handing out spots on the court. The preseason has revealed a more competitive gym than last year.

“I think everybody really has to prove what they can do,” Kirkpatrick said. “It kind of started from the beginning, we get a new coach so it’s not like we can carry things over from last season. I think all of that will be wiped out and it will really be about who shows up and who works hard. It looks like Coach is really giving us a fair shot.”