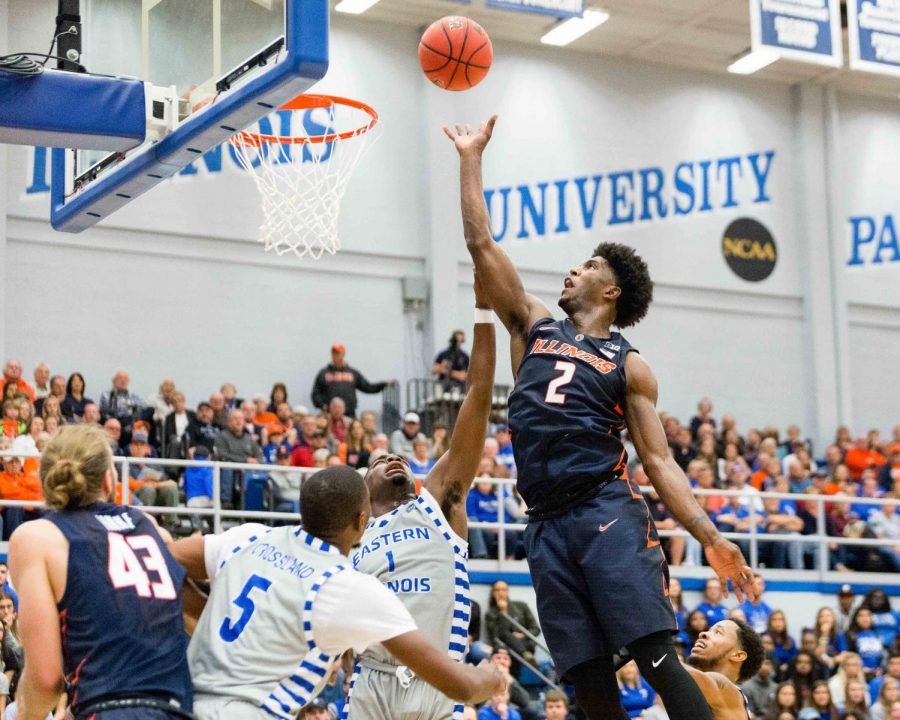 Illinois forward Kipper Nichols shoots a free throw after a technical foul during the exhibition game against Eastern Illinois at Lantz Arena in Charleston, Illinois, on Nov. 3. Head coach Brad Underwood is having his team take a more aggressive approach this season.

After a wild offseason that included coaching changes, decommitments, commitments and more, the Illini are ready to kick off the 2017-2018 season.

This Friday, Illinois will open up its regular season against Southern. Last season, Southern went 15-18, and made a second-round exit in its conference tournament. There are plenty of uncertainties as well. Let’s take a look at what we can expect from head coach Brad Underwood and in his first game as an Illini on Friday night.

The starting lineup has not been officially posted anywhere, but for the most part, there seems to be a consensus opinion that the starting five players on Friday will be Te’Jon Lucas, Mark Smith, Mark Alstork, Leron Black and Michael Finke. On paper, this gives Underwood and Co. a really nice combination of size, speed and ability to get things going quickly out of their own defensive end. Each of these players showcase strong court vision, as well as the ability to defend, get out a quick pass and finish on the other end. Alstork and Smith will be able to create plenty of offense on their own, but paired with a playmaker like Lucas and Finke and Black as threats to stretch the floor, this group could combine for a lot of points.

The thing to look for in this group is how well they execute Underwood’s high-octane system. In his initial press conference, Underwood mentioned that he would like to get a shot off within the first seven seconds of the possession on offense. This is much different than the old coaching regime, as John Groce was a big proponent of slowing things down, setting up an offense and running a traditional set. This will be much quicker, and honestly, more exciting to watch. It may take a couple games of fine-tuning before we get a good idea of what this system is supposed to run like, but once this team picks it up, it will be fun to watch.

Filling out the lineup

This is where it gets a little more interesting, as Underwood has a few different options to round out the rest of this lineup. The locks to see plenty of time are Kipper Nichols, Trent Frazier and Da’Monte Williams. Those three could all easily be starters, and it should not surprise anybody if they see a start from time to time. They each possess unique skill sets and will be great to come off of the bench in certain situations.

Nichols is a monster on the glass, and has shown early this year that he is not afraid to step back and shoot the three-ball. He will get tons of minutes all season, especially considering the lack of big men on the current roster.

Frazier is going to be a spark off of the bench and is someone that will be able to score in bunches. He has NBA range, and combines it with the playmaking and athleticism that allows him to consistently finish over larger defenders. His defense is the biggest question mark heading into the season, but we will see how that goes over the first few nonconference games before any real judgments are made.

Finally we have Williams, who seems to constantly be the most underrated newcomer to the team. He is already a plus-defender who has shown strong finishing abilities and some strong passing. The son of Illini legend Frank Williams is going to get plenty of minutes this season, as he is a great fit for Underwood’s system and has shown potential early on in practice.

Aside from those three, look for guys like Aaron Jordan, Gregory (Spicy G) Eboigbodin, and Matic Vesel to see some time, especially early on. Jordan has shown some potential this offseason after not really getting much of an opportunity in the previous regime. The other two, Eboigbodin and Vesel, are both young guys that have shown a lot in practice so far, but many consider them a little too raw to be serious contributors this season. I expect them to get a lot of time in the non-conference schedule to get a better feel for what they are.

This should be an easy win for Illinois. In Underwood’s first career regular season game with the Illini, they will be taking on a team that has faced its own struggles, and the talent on Underwood’s roster will be too much for a mediocre Southern team. Alstork, Smith and Finke should be able to attack the rim at will, and that alone will be enough for the Illini to coast to an easy win.