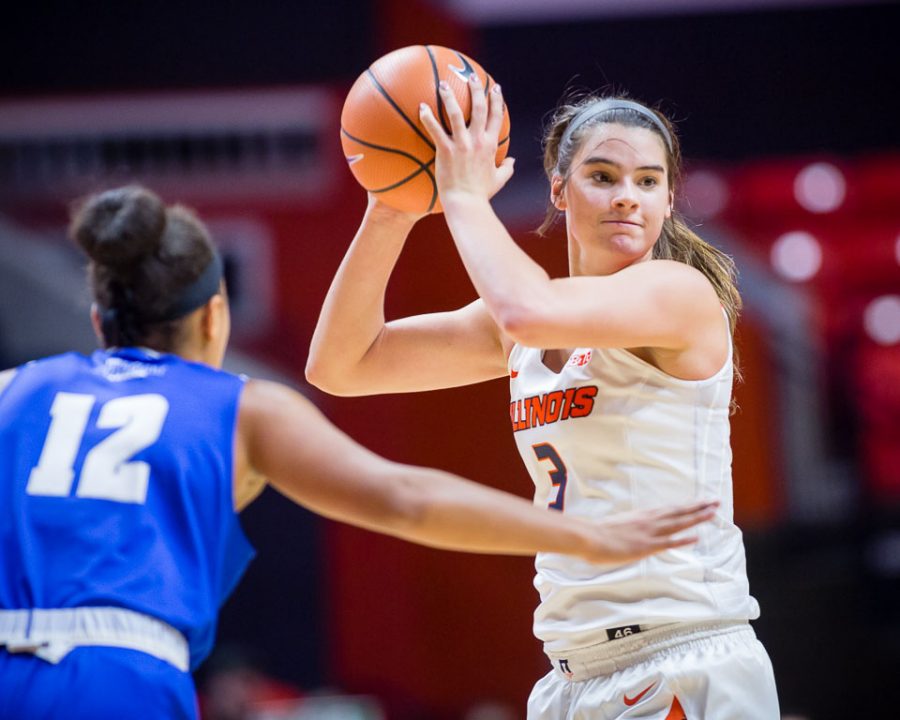 Illinois forward Alli Ball (3) looks to pass the ball during the game against Fort Wayne at State Farm Center on Friday, Nov. 10, 2017.

As the 2017-18 Illinois women’s basketball season began Friday with a matchup against Fort Wayne, the Illini did enough to earn a 64-50 victory. That is all newly hired head coach Nancy Fahey could ask for as she tries to implement her fast-paced offensive minded system.

It was the Mastodons who opened the game with the high scoring offense, as they made seven 3-point shots in the first quarter, and took a 17-16 lead to the second.

Fahey knows these first few contests will be an adjustment period for her team.

“We’re putting a lot of stuff in. It’s not like there’s a base here and we’re building off the base, we’re starting from scratch,” Fahey said. “Just like making a cake, we’re at that point right now where the ingredients are being put in.”

The Illini would respond, as Brandi Beasley and Ali Ball, making her debut, would put 15 points total on the scoreboard, and the Illini had a 33-27 lead as the halftime buzzer sounded.

Ball was simply happy to get started as a member of the Illini.

“It felt really good, it was fun playing with all these girls they’re very talented,” Ball Said. “I have played three years of college basketball so that is not a new feeling for me. Going out and playing with freedom, that was my biggest thing.”

Fahey was impressed by both players’ performances, and saw each as a critical piece to the Illinois Victory.

“I knew (Ali) was a shooter, but what I really did notice (was) her ability to rebound. I walked down to the bench and said ‘that’s how you get my attention.’”

As for Beasley, Fahey is trying to find the right balance between forcing her to run the offense and letting her create on her own.

“(Brandi) made a move, and I wanted to go up in the stands and clap, it was that special,” Fahey said. “In practice a lot of times she’s trying to run the system and sometimes I need to get my hands off of her and let her go.”

The Illini started fast out of the break, and used a 16-8 scoring advantage in the third to hold a comfortable 14 point lead going into the fourth.

From there, the Illini mirrored the halftime show of renowned balancing act Tyler Scheur, and performed a balancing act of their own, holding the ball for longer periods of time, and not letting the game slip away.

As her first game went in the books as a victory, Fahey knew this was not just any game.

“I walked into State-Farm, and we’d been practicing there but to walk (out) on game day, I was a bit in awe. It wasn’t another game. It was a special game.”

The result wasn’t a textbook, high-scoring win for a Fahey-coached squad, but the freshly-anointed head coach did not seem to mind.

“I think they did a pretty good job. Especially at the end when they clock managed,” Fahey said. “That’s a 3-point shooting team, you start coming down taking a bunch of quick shots, game changes really quick. They court managed very well.”

Her players were also happy to get the win, especially for their new head coach, which Brandi Beasley, who finished with 13 points, commented on.

“We actually love (Fahey) as a coach, she’s a great person. I just feel like when we go out there we (play) hard because we know that she cares for us”

As the Fahey era tipped off with a victory, Illini fans will next want to see if their team can win executing Fahey’s brand of basketball.