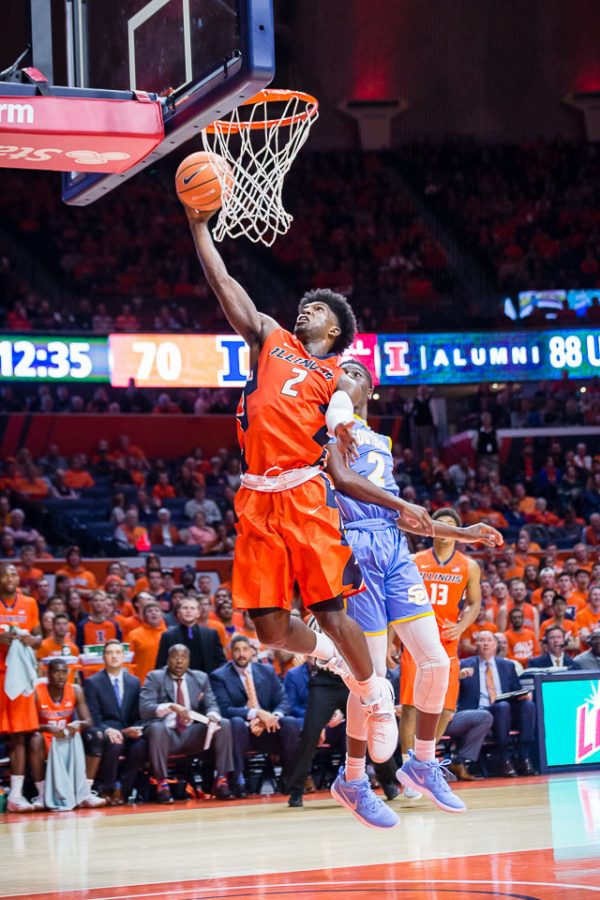 Illinois forward Kipper Nichols goes up for a layup during a game against Southern at State Farm Center on Friday, Nov. 10, 2017.

After picking up a big win in game one of the Brad Underwood era, the Illini are set for game two on Sunday evening at the State Farm Center. Tennessee-Martin is coming in looking for their first win of the season after dropping its opener 102-91 in an overtime thriller against Marshall.

Like game one for Illinois, in which they played Southern, UT-Martin is not a high-profile opponent, but this will still be an exciting matchup for a few reasons.

One, no matter the opponent, this is still just game two under the new coaching regime, and the same goes for all of the new faces on the team. Guys like Mark Alstork, Mark Smith, Trent Frazier, Da’Monte Williams and more still have to get fully acquainted to playing in the State Farm Center, and games like this are one of the best ways to get that done. The whole team showed up and played well in game one, and while that was a great start and sign of things to come, it remains to be seen if they will be able to put up points like that consistently.

Underwood’s systems looked to be running well on both sides of the floor in game one, but UT-Martin is a different opponent, and it will be interesting to see how this young group adjusts.

Can the veterans continue to step up? Game one brought solid debuts for all of the new freshmen on the team, but really, the best play came from the group of veteran leaders on this team. Michael Finke, Leron Black, Aaron Jordan, Kipper Nichols, Te’Jon Lucas and Alstork —even though he is new here — played significant roles, and will need to continue to do that if the Illini want to win games. The freshman group is vastly talented, but at the same time, they are still making so many adjustments to life on campus, Underwood’s system, and more. They will all contribute plenty this season, but the majority of the load will fall on the shoulders of this veteran group.

In game one, Alstork was the biggest surprise. Not necessarily surprising in the sense that I did not expect him to play well, but more along the lines that I didn’t expect the whole offense to run through him, or him to grab 10 rebounds and a double-double in game one. He already looks so comfortable in Underwood’s system. Alstork was a guy that consistently put up really good numbers in the Horizon League when he played at Wright State, and if the Southern game was any indication, that will be his role here as well. Underwood seems to trust him with the ball in his hands, and he played tight defense on the other side of the ball as well. I expect to continue seeing him out there with the longer guards, like Smith, Frazier and Williams, in hopes that they can continue to learn from him and transition to the college game.

Though the Skyhawks dropped their opener on Friday, they showed that this will be no easy matchup on Sunday. They put up 83 points in regulation before ultimately dropping the game 102-91 in overtime. Senior forward Dominique Williams put up 25 points and six rebounds, and you can expect the team to rely heavily on him again on Sunday. The 6-foot-6-inch senior is playing in his first year with the Skyhawks, but he looks to be their primary offensive weapon already.

That said, the Illini showed that they can score in game one. They put up 53 points in the first half, something they did only once last season, and went on to win 102-55 over Southern. Alstork and Jordan lead the team in scoring, and you can expect both to be up there again, along with guys like Black and Finke.

If Underwood can keep his team running with the same efficiency in game two, expect a hefty victory over the Skyhawks this Sunday. The final score: Illinois 86 — UT-Martin 60