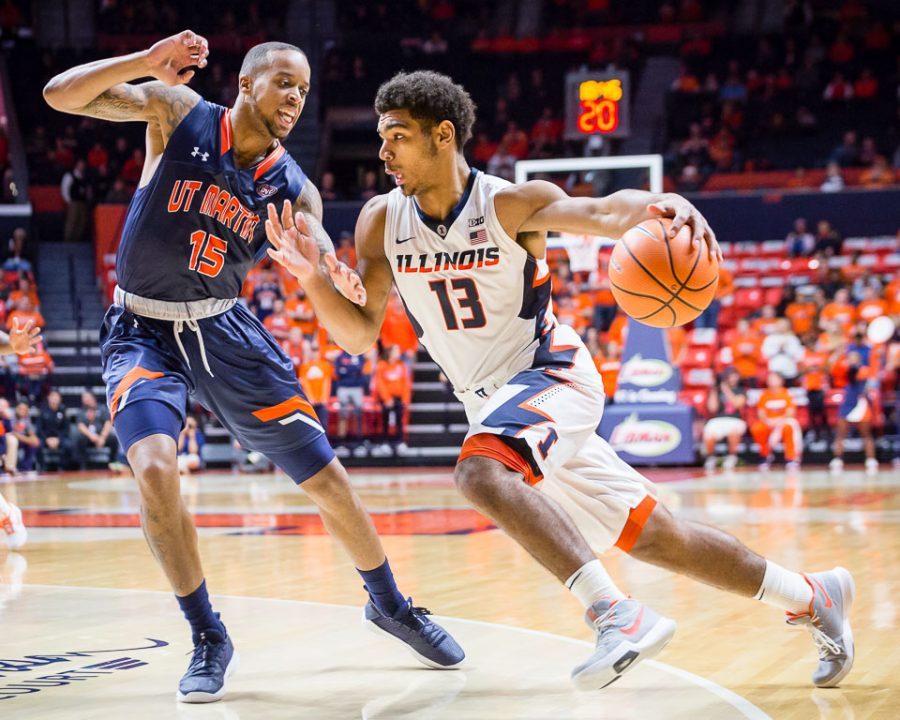 Illinois guard Mark Smith drives to the basket during the game against Tennessee-Martin at State Farm Center on Sunday, Nov. 12, 2017.

Game two is in the books and the Illini were able to secure an 77–74 victory over the UT-Martin Skyhawks. This game started off a little bit slower than the first, including a total of 10 turnovers from the Illini in the first half alone. But, despite the early struggles, Underwood was able to get his guys in rhythm and get the game back in Illinois’ control, stretching the score to a 15-point lead by the end of the first half. But, the Skyhawks made a little run in the second half to cut the lead to as little as three, but ultimately, the Illini would survive a last-minute flurry to win the game.

But, despite the final score, this game brought some big changes. Let’s take a look at Underwood’s adjustments and how the Illini played in game two of the Underwood era.

The group of freshmen guards had a nice debut on Friday, but they made big improvements in game two.

Mark Smith was the most impressive of the bunch, finishing the game with 13 points, 2 rebounds and 3 assists in 28 minutes. He showed some real flashes in the first game, but Underwood really let him loose in game number two. After Mark Alstork got into some early foul trouble, Smith took over and was able to attack the rim at will. He flashed a few spectacular finishes in the rim, exhibiting superb body control and great discipline to finish off the shots. Aside from his offense, Smith played lockdown defense for most of the game. There were a few possessions that he got beat, but for the most part, he was strong. While he still has plenty of room to grow, the ceiling is sky-high for the reigning Illinois Mr. Basketball, and with Underwood at the helm, he looks like he will be reaching for that sooner than later.

Trent Frazier was really impressive in his second game as an Illini. He did not play as much as the other two freshmen, but was still able to carve out 18 minutes — scoring six points, while racking up one rebound and one assists. While Frazier’s numbers in the game might not exactly jump off the page, he definitely made his presence felt, and that was no more apparent then on a two-play stretch in the first half. On the first offensive possession, Frazier hit a nice three-pointer, before grabbing a steal on defense and running it all the way back for a transition layup. I definitely underestimated Frazier’s defensive abilities, and he has shown that he can do it all so far. With more minutes and the ball in his hands, Frazier has the potential to turn into a really special player for the Illini.

Da’Monte Williams played some meaningful minutes, including hitting a three-pointer that jumpstarted the offense in the first half. He looks to be potentially the most athletic of the three, but it is obvious that there is still a bit of a learning curve for the young guard. He finished the game with three points, two assists and four rebounds in 19 minutes. Williams received a lot of early notice for his defensive prowess, and he showed some flashes of that in this game. But, like Smith, he has the tendency to get burned from time to time. It’s nothing to worry about, and it is exactly why these non-conference games are so huge, but it will be interesting to see how the young trio adjust when Big Ten play rolls around.

Since press conference No. 1, Underwood showed high praise for veteran big man Leron Black. This is nothing new, as past coach John Groce always had high praise for Black, but through two games this season, he has certainly delivered.

In game one, Black dropped 14 points and added six rebounds, but he only got better in game two. Against UT-Martin, the forward chipped in 21 points and secured eight rebounds in the process. With so many young guys contributing big minutes, it is huge for Black to add in that veteran presence, and him contributing so much offensively is just an added bonus. Black has continued to be aggressive in the post, and hopefully that will rub off on the rest of the team. Michael Finke also had his moments in the game, but Black has continued to be the premier forward down low this season.

Following the game in the players portion of the press-conference, Black spoke of how he works as a leader on the team, and especially working with the younger guys.

“I’ve been trying to lead by example as much as I can,” Black said. “Just trying to talk to the younger guys, teach them what I’ve learned since I’ve been here, and teach them all of the the stuff that the older guys taught me when I was younger. We’ve just been trying to just get better as a team.”

A “tale of two halves,” is how Underwood described the game in the start of his press conference. And, for the most part, he could not be more accurate. Though the first half started slow, the Illini went into the half with a big lead, only to hang on by a thread to win by three.

Underwood said that while his team could improve a lot of little things, he expects more energy and toughness out of his guys.

Overall, he still had a lighthearted tone in the press conference, and Underwood looks more than ready to get his team back into shape for game three against DePaul on Friday