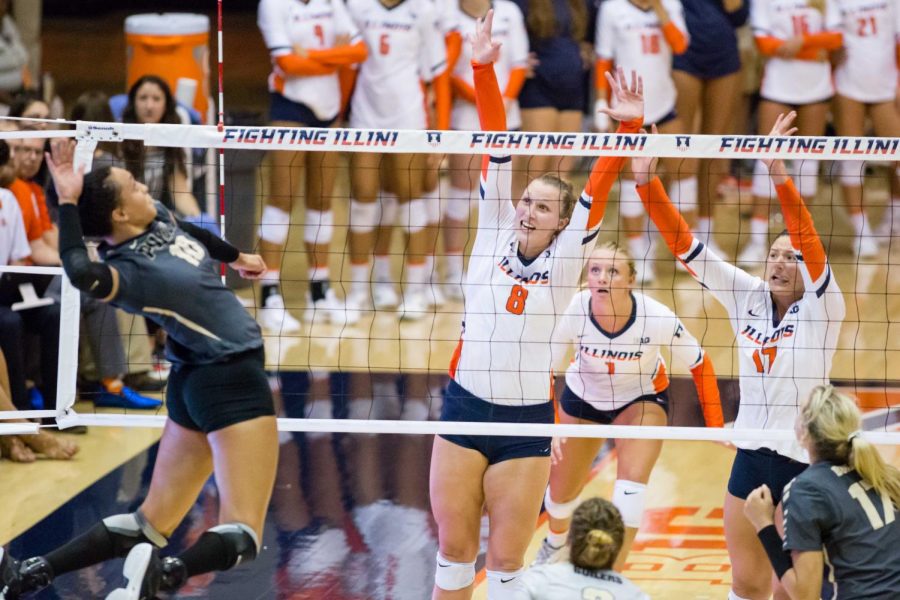 Illinois outside hitter Beth Prince (8) and Illinois middle blocker Blayke Hranicka (17) rise up the block the ball during the match against Purdue at Huff Hall on Friday, October 6. The Illini lost 3-0.

Despite a 0-2 weekend on the road, the Illini are learning how to become more polished as the post-season approaches. Illinois is now 18-9 overall and 9-7 in the Big Ten.
According to head coach Chris Tamas, Illinois found silver linings in between losses to No. 8 Michigan State on Friday and Michigan on Saturday.
“A lot of nice things did happen,” Tamas said. “It was ideal, again, but we saw a lot of good volleyball from each position, not just our outside hitters or blockers – everyone.”
Despite a leading performance in kills from redshirt sophomore outside hitter Beth Prince, the Illini fell short Friday night against the Spartans. In a three-set sweep, Prince was still an offensive force with 13 kills. Trailing her was freshman outside hitter Megan Cooney with eight kills.
A nail-biting second set showed the team’s grit, Prince said. The 26-24 set saw 16 kills and seven errors for the Illini, which nearly mirrored the Spartans’ 17 kills and five errors.
Tamas said the Spartans hit the ground running in the first set. Falling behind early on contributed to the team’s deficit, he said.
“Out of the gate I thought Michigan State served well and came out a little faster,” Tamas said. “They didn’t want to challenge our block as much as we thought, but that happens. You prepare one way and sometimes teams do something different.”
The Illini out-blocked the Spartans nine to four overall, with a team-high three blocks from Cooney. Tamas said that despite the loss, he saw good performances out of the Illini offense.
“There are always silver linings to everything,” Tamas said. “A lot of nice things happened on our side of the net, not ideal again but we were able to turn up the heat and take some good swings, especially in the second.”
The tight set proved the Illini could “hang” with top-tier teams in the Big Ten, Tamas said.
According to Prince, the team didn’t utilize Michigan State’s block as they planned earlier this week.
“Things we previously talked about using just didn’t pan out,” Prince said. “(Michigan State) has a big block, and I think we were trying to use that too much.”
On Saturday, the Illini traveled to Ann Arbor, Michigan, in their second road match of the weekend. After only one week apart, the Wolverines and the Illini met again in a hard-fought five-set match.
Illinois lost 2-3 and hit under .500 in all five sets. The first game allowed the second-largest point advantage of the night – Michigan edged Illinois
25-20.
The next four sets were back-and-forth battles.
“These are tough battles to have on the road,” Tamas said. “This team didn’t change a lot since last week, but we came out slower I thought. It was the same team, just a different night for us.”
Overall, each team tallied 68 kills. The Illini had only 21 errors over 151 attempts, while the Wolverines had 28 errors over 152.
Tamas said despite the fight from the Illini, one small play can change the course of the entire game.
“If two points go the wrong way, or if you give away a play, it makes a huge difference in close games,” Tamas said. “We need to play a little more clean. I’d like to see us be better out of the gate.”
Freshman Tyanna Omazic said once Illinois fell behind in the first set, the energy on the court shifted.
“The energy changed a lot and the atmosphere after the first set wasn’t as intense,” Omazic said. “ No one was yelling as much, and it was a packed gym at Michigan.”
Omazic had nine kills and four blocks for Illinois against Michigan. Leading the team 21 kills was sophomore Jacqueline Quade.
[email protected]
Leave a Comment
MOST READ
1