Nickerson set to return to sideline 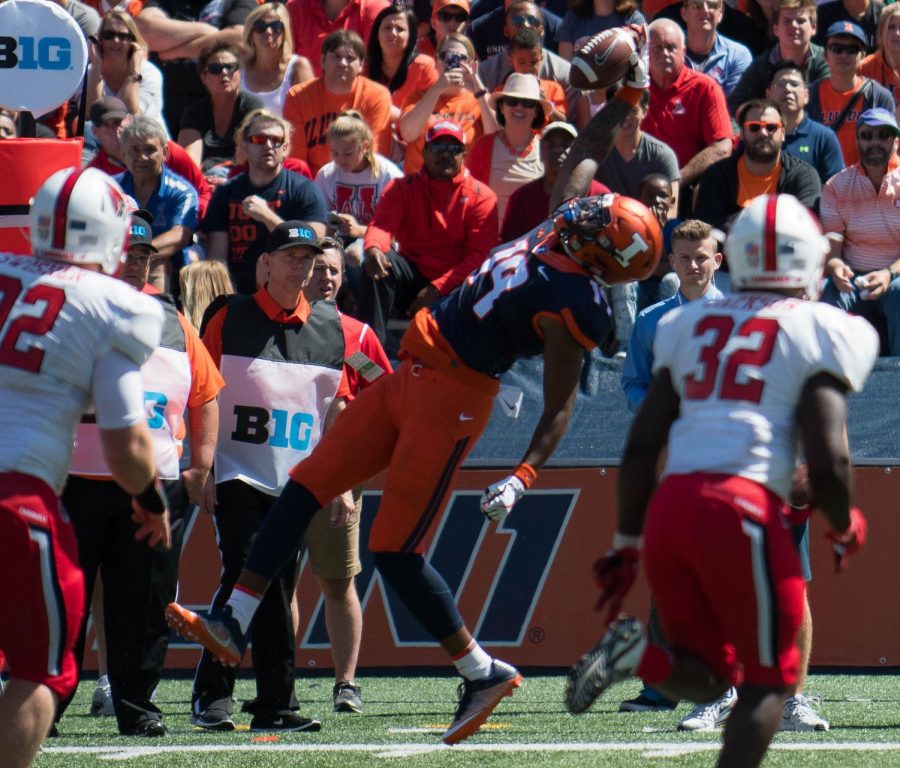 Louis Dorsey, tight end for the fighting Illini, makes a one-handed catch at the game against Ball State. The Fighting Illini won 24-21.

“All of last week was just very, very tough from all areas,” Nickerson said. “As a coach, you never want to be away from your players because you want to be in the environment and coaching them up to get better, so that was very tough being away. But the circumstances were very hard.”

Nickerson said head coach Lovie Smith was respectful and told him to be with his family for the week.

“The appreciation for something like that … you just can’t put words to it when you’re going through what I went through last week,” said Nickerson.

Nickerson said he is ready to use football as an escape from his difficult personal situation.

He said he has reviewed some of the Indiana tape from last week and saw his players working hard. He was displeased with the final result, but he was happy with the effort his unit gave.

Nickerson is anxious to return to the sidelines to be with his players and prepare for a challenging Ohio State team.

“Football is the thing I love to do and coaching the guys up,” Nickerson said. “It’s just been good to get back in the office, put the video on and start getting back to work.”

Smith briefly touched on why he and his staff have started so many true freshmen this season.

The Illini have started 16 different true freshmen this season, the most in the FBS. The team also has 73 cumulative true freshmen starts.

“After last year and through the first year, we evaluated our roster and said we need to make improvements,” Smith said. “The only way we could make improvements were with freshmen and a few upperclassmen that we brought in. That’s what it is, instead of, ‘Hey, we’re going to go with all freshmen.'”

Smith said he didn’t know how many true freshmen he has played this season, but did acknowledge that he has seen improvements from the class.

He reiterated that he wants to make bigger steps by winning games, but the small steps have been important, too.

“Louis Dorsey took another step (against Indiana), Ricky Smalling, Jamal Woods … we can go down the list,” Smith said. “These players are just getting better and better, so I’m really excited about that.”

This was Dudek’s first season back after suffering two season-ending knee injuries over the past couple years.

He will finish the season with 24 catches for 262 yards and a touchdown. Dudek finished his freshman campaign with 1,038 yards and six touchdowns.

He understands that staying healthy for a whole season isn’t easy after returning from two knee operations.

“I think the doctors would say your body is going to go through some things your first year off of back-to-back injuries,” McGee said. “It’s your first time back out there in full action, and Mikey made it a long time, but his body started to wear down.”

McGee mentioned that he sees Dudek having the potential to return next season and put up numbers like he did his freshman year.

“I think that his knees are healthy,” McGee said. “So he’s going to be able to go into the offseason and have a huge year next season because again I think doctors are going to say your body is going to struggle that first year.”