Trying to make a name for herself 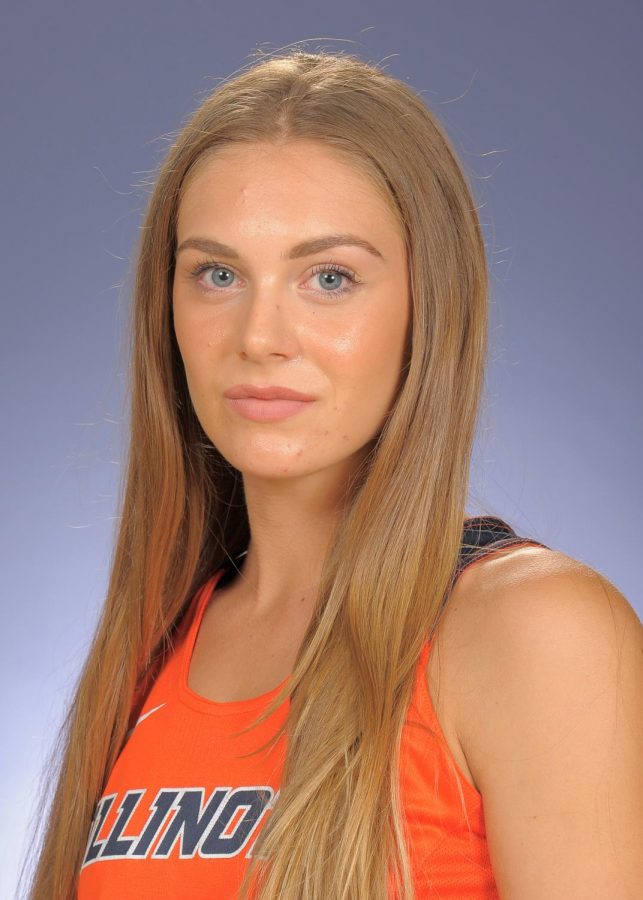 If you follow the NBA, chances are you’ve heard of the young, sensational, 6-foot-11-inch superstar on the Milwaukee Bucks, Giannis Antetokounmpo. Hailing from Greece, Antetokounmpo is the face of a new generation of Greek basketball.

Although she hasn’t yet reached the heights (literally and figuratively) that Antetokounmpo has, Illinois freshman Nancy Panagiotopoulou-Andritsopoulou (and you thought Antetokounmpo was hard to pronounce) shares a home country with him, and hopes to one day change the perception of women’s basketball in Greece.

Born and raised in the Athens metropolitan area, Athanasia Panagiotopoulou -Andritsopoulou (Ah-tha-NA-see-uh  Pa-na-yo-toe-pou-lou Ahn-dreet-so-pou-lou). She learned the game of basketball from her family.

“Both my parents (played) basketball,” Panagiotopoulou-Andritsopoulou said. “My dad is a basketball coach now; he was coaching me for two years in Greece as well. My entire family has been into basketball.”

Growing up in such a large city can be tough, but Panagiotopoulou-Andritsopoulou didn’t let that affect her, and instead focused on developing her basketball skills.

“It’s a big city. My school (was) really far from where I was living — also where I practiced was far, so I spent too much time on transportation, but it felt like home,” she said. “Even though everything was so far from one another, it helped me develop (as) a better player and person.”

As Panagiotopoulou -Andritsopoulou continued to play, she started to progress and collect many accolades. Among them, she joined the club team Kronos Agiou Dimitriou, won the 2016 American Community Schools of Athens Player of the Year and even represented her country at the 2015 FIBA U16 Women’s European Championship and the 2016 FIBA U18 Women’s European Championship.

She also has a connection to Milwaukee’s Antetokounmpo, also known as the “Greek Freak,” as her god-father coached Antetokounmpo at the Athens-based club Filathlitikos B.C., where he played before being drafted in 2013.

Although she enjoyed great success in Greece, Panagiotopoulou-Andritsopoulou saw the flaws in the Greek basketball development system.

“Women’s basketball (is) not really a big thing in Greece. No one really cares about it,” she said. “There were some coaches that actually cared to develop you as a player (and) others who only cared about winning. I believe that winning is a big issue, but you need to help the players get better and not many coaches (were) willing to do that.”

Knowing she could achieve more, Panagiotopoulou-Andritsopoulou dreamed of playing in the U.S. Coming to the Illini basketball program is the moment she has been waiting for.

“(It’s) what I’ve been wanting to do for the past five years. It was my goal to come here,” she said.

“I feel like everyone cares and everyone is helping you, and women’s basketball is a big deal here, and I’m really excited being a part of it now.”

Coming to a new country has been an adjustment for Panagiotopoulou-Andritsopoulou, who shared that she doesn’t care for American food, and has only met one other Greek person on campus.

However, she doesn’t miss Greece too much, because the Illinois community has made her feel at home.

“It’s all different, but I don’t feel like I left home,” she said.

This season, the Illini have more than a few players competing for playing time at the forward position, where junior Alex Wittinger, sophomore Ali Andrews and senior-transfer Alli Ball have logged a majority of the minutes to start the season. Panagiotopoulou Andritsopoulou knows she will have to work extremely hard to see playing time in her freshman year.

“I must keep working hard because we have so many players that play the same position as me,” she said. She also mentioned that she thinks if her work is good enough, she will be rewarded with playing time, which is an example of new coach Nancy Fahey giving everyone a chance to prove themselves as her tenure begins.

As for the women’s game back home, Panagiotopoulou- Andritsopoulou feels it has its flaws right now, but a string of successes by the Greek national team could change that.

“I really believe it could be changed. It’s only a matter of the mindset people have,” she said. “It’s sad that (women’s) basketball is not a big deal because we have many good players. Club teams are poorly organized and they don’t care about the players, but this could be changed. It will take time; there must be success by the women’s team.”

If her time at Illinois is a success, Panagiotopoulou -Andritsopoulou may one day be able to personally influence the Greek women’s national team’s success. But for now, she is focused on her time in Champaign and improving as much as she can.

Who knows, with her impressive 6-foot-3-inch height, Panagiotopoulou-Andritsopoulou may become women’s basketball’s equivalent of the “Greek Freak.”