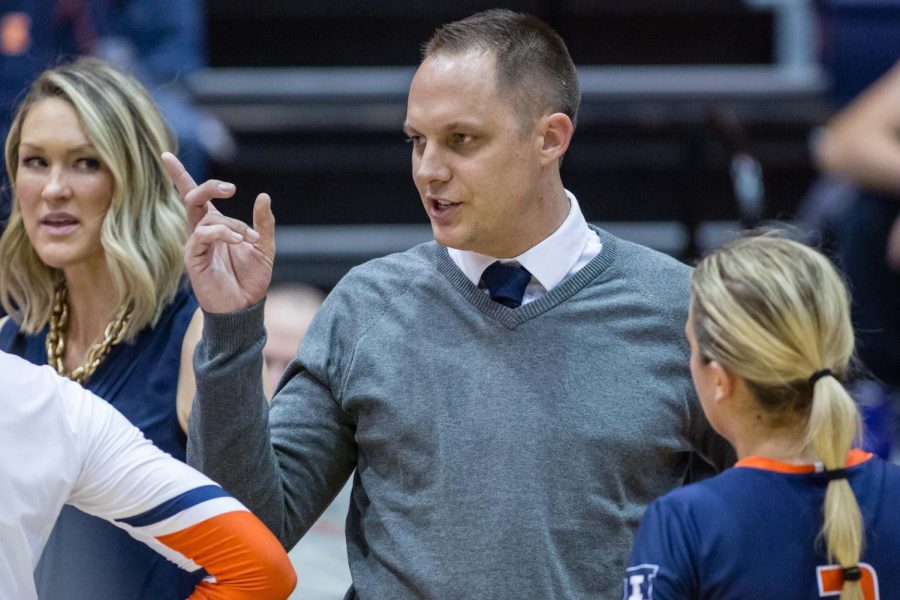 Illinois head coach Chris Tamas talks to his team during a timeout in the match against Michigan at Huff Hall on Saturday, Nov. 5, 2017. The Illini won 3-2.

Illinois volleyball will return to Huff Hall this Friday at 6 p.m. to begin the team’s final stretch of regular season home games.

As the season winds down, Illinois will take on No. 13 Wisconsin for the first time this year. Despite Wisconsin’s top-20 ranking in the NCAA, the Badgers are 8-8 in the Big Ten, hovering just below the Illini in conference standings in seventh place. Illinois is currently 9-7 in conference play and 18-9 overall.

According to head coach Chris Tamas, the Illini are comfortable playing against higher-ranked opponents. He said the team is capable of taking down Wisconsin, especially on its home court.

“Whenever you’re facing top caliber teams, you need everyone giving their full effort, and I think we’ve gotten comfortable doing that so far into the season,” Tamas said. “We’ve shown what we’re capable of over a long period of time, and I think we’ve proven that we can play with these teams.”

Illinois is coming off a 0-3 loss to No. 11 Michigan State and a 2-3 loss to No. 34 Michigan. Tamas said the recent losses haven’t skewed the Illini’s focus as they approach their final home stretch, but following scouting reports more closely might help the team produce a win.

“Last week our plans were good, we just didn’t execute as well as we could have,” Tamas said. “We might have been a little road weary; it’s that point in the semester too where school gets tough too. That’s not an excuse, but we have a young team, and these moments are teaching us how to be better all the time.”

Playing more consistent volleyball will also be a cornerstone for success against Wisconsin. Tamas said that despite getting off to slow starts last week against Michigan and Michigan State, the Illini learned that they need to play more evenly within matches.

“I think again, we’re aiming to duplicate where we played really well at times,” Tamas said. “I think what we’re looking for is more consistency.”

Illinois has gone 2-2 in the last four five-set matches it has played. Tamas is confident that Illinois can outlast teams like Wisconsin at this point in the season.

“I mean you look at the five-setter with Minnesota a few weeks ago, and our tight set with Nebraska,” Tamas said. “These are teams we can hang with.”

Wisconsin nearly mirrors Illinois in its lack of seniors. With two seniors on Wisconsin’s roster and one on Illinois’, both teams are still growing, Tamas said.

“You’re always building on what’s already here,” Tamas said. “We have a super talented returning group, so I think it’s just about what scenarios we’ve seen and how we keep learning.”