Volleyball falls to No. 12 Wisconsin 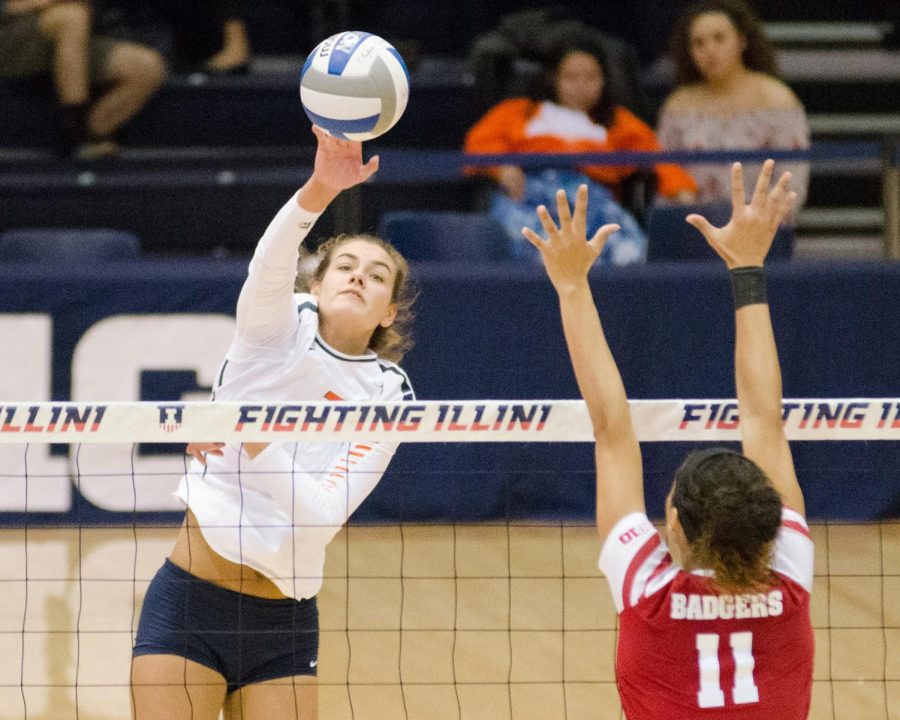 Illinois outside hitter Jacqueline Quade splkes the ball during the game against Wisconsin at Huff Hall on Friday, November 17. The Illini lost 3-1.

Illinois got off to a fast start against No. 12 Wisconsin on Friday night.

But, in its third-to-last home game of the season, the Illini fell to the Badgers 3-1.

“I thought Wisconsin played well, but I also think we left a lot of point on the floor,” said head coach Chris Tamas. “We made too many mistakes at the wrong moments, and when one part of our game was on, the other was off.”

After leading by a set-high of five points in the middle of the first set, the Illini secured their position above the Badgers, 25-20.

The end of the match saw massive runs by both teams. Senior libero Brandi Donnelly had four total digs. The Illini tied the first together with a kill by outside hitter Jacqueline Quade, who lead the team in set one with four kills.

“There were some plays tonight that we could have capitalized on, and there are some that we didn’t make at all that are plays we normally make,” Quade said. “I think offensively we all played pretty well; I think we matched up well. I would say we just (need) more discipline on the block and making more plays.”

The Badgers opened up the second set with a quick kill by sophomore outside hitter Madison Duello. But Bastianelli answered back with a massive kill that would set the tone for a tight second set.

The Illini trailed the Badgers throughout the second set of the night, falling behind a set-high of four points. Despite their narrow deficit in the beginning of the set, the Illini finally took the lead after a kill by Quade that put the match at 15-15.

Quade would lead the Illini again through the second with eight kills. In the second set, Illinois locked down 13 total kills and six errors within 39 offensive attacks.

“We got away from a lot of things that we do in practice, whether that’s being at the net or closing blocks or watching where the balls falling,” said junior Jordyn Poulter. “I think you can always follow your scout better; within rallies we tend to get away from the scout.”

The Illini held onto the Badgers during the final runs of the game, tying the set at 16-16, 18-18 and again at the 20-point mark. A four-point run by the Badgers pushed their lead to 20-24 in the second. Illinois answered with a sharp two-point run. But it wasn’t enough to counteract Wisconsin – Illinois fell in the second 25-23.

Wisconsin edged Illinois in the third, closing the set 25-16 with the largest point-gap of the match. Although the Illini were able to stay on the Badgers’ heals in the beginning of the game, the difference in points widened drastically as the set went on.

The Badgers used Illini errors to go on several two- and three-point runs that resulted in a match-high nine-point gap. The Illini tallied 11 kills in the third with seven errors in 33 offensive attempts. The Badgers produced 16 kills under 29 attempts with only four errors.

In the fourth and final set of the night, Illinois fell to Wisconsin 25-20. Despite early tie-ups in the first chunk of set-play, Illinois found itself slipping into another point-gap. The last set saw match-highs in lead changes and ties – three and 11, respectively. The Illini totaled 11 kills in the fourth with only four errors under 33 attempts.