Takeaways and reactions from Illinois vs. Wake Forest 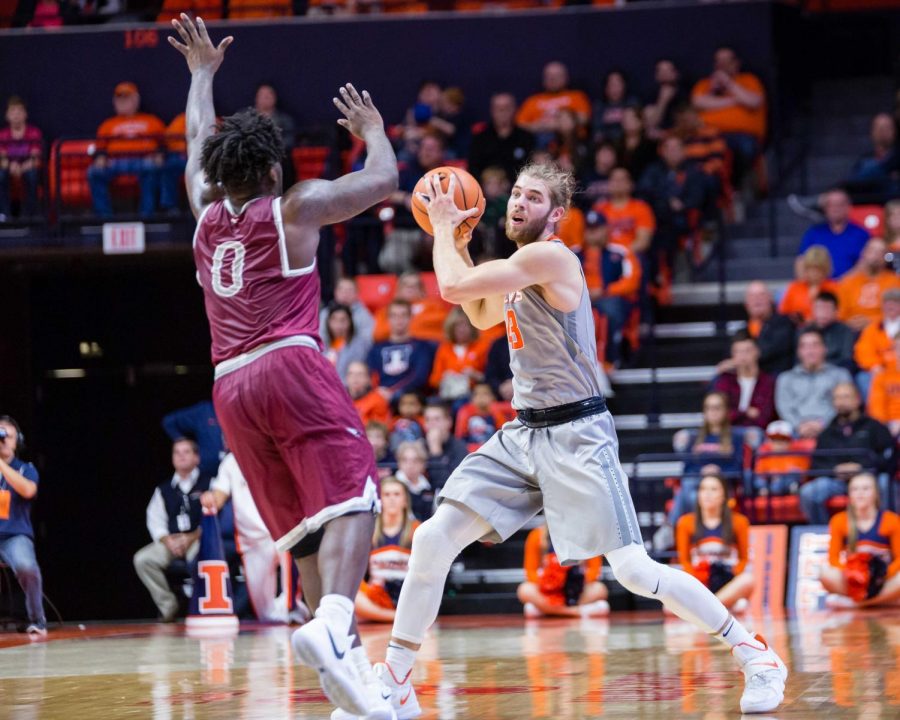 On Tuesday night, in a tough-fought game, the Illini fell 80-73 in their first true road test of the season. While the score was close and the Illini never gave up — despite multiple big deficits — this was a tough game to lose, and it revealed some serious issues that Underwood and his staff will have to work at to shore up before Big Ten play gets too deep.

Last night, Illinois faced its first legitimate big man of the season, in Wake Forest’s 7-footer Doral Moore. The results? Not so great. Michael Finke got into early foul trouble, and after he helped boost his team to a hot start, he had to sit out for the majority of the first half to preserve him for later in the game, allowing the Demon Deacons right back in it.

While Finke is a big guy himself, the lack of another player who can consistently step in and guard a legitimate center is scary. Freshman Greg Eboigbodin may be that guy down the road, but right now he is still very raw and has committed plenty of fouls in limited playing time. Freshman Leron Black did his best to keep Moore out of the paint, but at times it was simply too easy for the Wake big man to back down whoever was defending him and slam it home, or for him to drop in a nice, easy hook shot. This could prove to be very problematic for the Illini down the road, but expect Underwood to make some adjustments.

We saw the Illini struggle against the zone earlier this season as well, and they certainly did again last night. After Underwood and Co. got off to a blazing start, scoring 23 points in the first eight minutes, the Demon Deacons adjusted to a three-two zone, which stopped Illinois right in its tracks. There were multiple scoring droughts, including one that was five-plus minutes between Illini buckets. Underwood will surely be running his guys against plenty of zone defenses this week, and hopefully, this will not be an issue that I’ll have to write about again.

This is not to be too critical against Black or Finke, but in a road game against a tough ACC opponent with multiple freshmen playing big roles, you absolutely need a big game out of both of those guys. Mark Smith and Trent Frazier both had rough games, but as freshmen, that is almost to be expected. On the other hand, when you know that these longer guys are feeling some additional pressure considering this is their first big road test, it would have been huge to have better games from Finke and Black all night. The duo both shot the ball poorly, and after Finke’s early foul trouble, his impact defending against Moore was very limited. In future games, look for both of them to step up and right the ship for this one.

I won’t get too into this, but last night the officiating was questionable, to say the least. The one specific play that bothers me was the apparent six-point play, in which Wake Forest was awarded a three-pointer before getting the ball back, eventually leading to another three. The call should have gone one of two ways. One, the three counts, and it is Illinois’ ball. Or, two: Finke fouled his man, the shot does not count and Wake gets a new possession. Seeing that this six-point swing stemmed from this officiating error is frustrating because if that does not happen, last night is a totally different ballgame. But, what happened, happened, and the Illini will have to move on, but I am very interested to see that crew’s explanation if and when that comes out.

The more I watch Jordan play this year, the more I am amazed he couldn’t carve out a role for himself during John Groce’s tenure. Jordan has been absolutely lights-out from three this season, and he put on a heroic performance last night, almost single-handedly taking this game for the Illini. He contributed 20 points (a career high), on 6-10 shooting (4-6 from three-point range), while grabbing five rebounds and locking down on defense all night. Underwood has repeatedly praised him for his work ethic, and it has certainly showed so far this season. I would honestly be surprised if Jordan does not sneak into the starting lineup sooner rather than later.

Williams only saw 11 minutes last night, but I wish we would have seen him more. He scored seven points on 3-5 shooting, while also grabbing three rebounds and posting an assist in his short time on the floor. He also hit a huge three late in the game to narrow the lead, and as always, was solid on the defensive end. Williams has been one of the more quiet guys from this freshman class, but don’t be surprised if he gets more opportunities to show what he’s got in the near future.

Underwood is a coach who likes to use games like this as motivation. While you never wish to lose a game, this one could turn into a nice teaching point, especially with such a young team. Considering the circumstances, this was still not a bad game at all for the team as a whole, and losing to an ACC team coming off of an NCAA tournament appearance by seven on the road is nothing to be scoffed at. I believe that Underwood will work out plenty of the kinks by the time his group hits the hardwood in Rosemont, Illinois, against Northwestern on Friday, and expect his veteran leaders to bounce back in a big way.