Illinois volleyball moves on to the Sweet 16 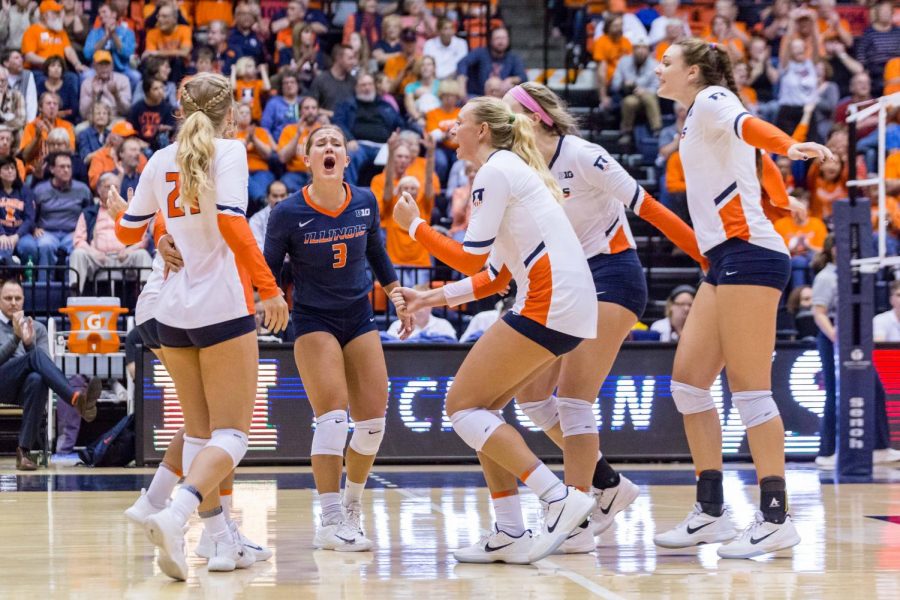 “Sweet” was the word of the weekend for the Illini.

After two thrilling five-set victories in the first rounds of the NCAA tournament Friday and Saturday, Illinois punched its ticket to the Sweet 16. This marks the eighth time in 10 years Illinois has advanced this far.

The journey began Friday night as Illinois took on Hawaii in the opening round of the NCAA tournament in Seattle. Despite opening up 2-0 in set play, the Illini found themselves clawing back to win in the final set.

According to head coach Chris Tamas, the team fell short at the beginning of the match, but proved it was worthy of its tournament bid in the final moments of the contest.

“We’ve been playing really well lately, but the first two sets didn’t show that way,” Tamas said. “We’re still focusing on one point at a time, and with such a young group, we still proved that we’re taking care of business.”

Tamas said he was thankful to get the first win under his belt, but knew No. 8 Washington would be a tougher battle the next day.

The match began in favor of the Illini on Saturday night on the Huskies’ home court. Illinois took the first set, 25-22. Each team tallied 16 kills a piece and had clsoe hitting percentages after the first set.

The battle for a spot in the Sweet 16 wasn’t going to be an easy one, said Tamas.

“I think we prepared for a battle,” Tamas said. “We have an expectation for ourselves to go on, and every team you see is going to be tough.”

Despite a strong beginning, Washington won the second and third sets, 25-17 and 25-20, respectively. In order to win, Illinois would have to come from behind and produce its second upset of the season against a ranked team.

In the fourth set, the contest began to look a lot like Illinois’ match against No.7 Minnesota at the end of the regular season. The Illini stomped the Golden Gophers in four sets at home back in November. Washington would face a similar fate, but not without a fight.

After tying game play 2-2, Illinois shook Washington in the final set, 15-9. The Illini held the Huskies to nine total blocks against their 13. However, Washington proved to be superior in every other category, including total kills, assists and digs.

Tamas said he was impressed at how the Illini played from all corners of the court.

“I’m just super proud of the way we played,” Tamas said. “We saw a lot of good things from everyone, not just the same people that always play, but the energy off the court and on the bench was incredible too.”

Illinois will face Michigan State this Friday in the NCAA Regional semifinals in State College, Pennsylvania. The time of the match is still to be determined.