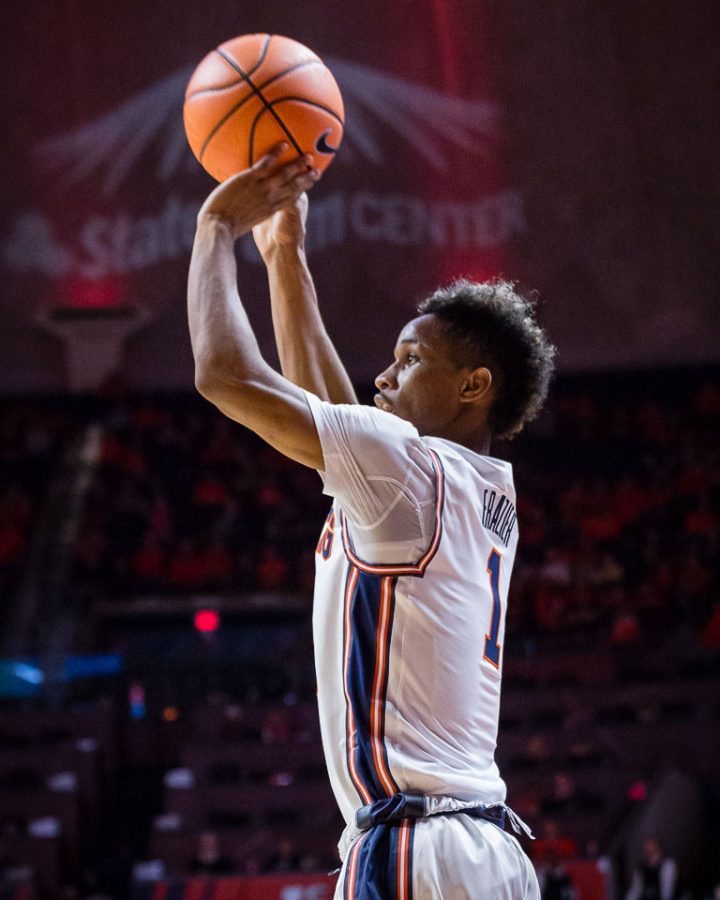 Illinois guard Trent Frazier shoots a three during the game against DePaul at State Farm Center on Friday, Nov. 17, 2017.

Despite a 19-point deficit at the half, their worst first half of the season, the Illini almost did the impossible and pulled out a miraculous comeback in the second half of Sunday night’s matchup with Maryland. Even after trailing by as many as 22 points, the Illini closed in during the second half, eventually taking the lead before a costly mistake that allowed the Terps to tie the game with only 0.1 seconds on the clock.

But, even with the spectacular comeback, head coach Brad Underwood said it best.

“We lost the game in the first half.”

But, with all of that in mind, here are some of my observations and takeaways from Sunday’s matchup with Maryland.

With all of the hype that came with Mark Smith, Trent Frazier, Da’Monte Williams and the rest of the freshman class, it is pretty easy to overlook the veterans of this team. But Sunday, they showed it is still their team. Even with a tough defensive game from Michael Finke, others like Leron Black, Aaron Jordan and Mark Alstork stepped up in a big way against the Terrapins.

The veteran trio combined for a grand total of 50 points, eight rebounds and two assists, while also stepping up to make some huge plays late in the game. Though the Illini were unable to finish this one off, it was encouraging to see how the vets stepped up and took over the game in crunch time.

Brad Underwood will have none of it

After the Illini starters gifted the Terps an early 10-0 lead, head coach Brad Underwood was visibly irate on the sideline. He snapped his clipboard in two, before taking out all five starters during his first timeout in favor of his usual bench-mob.

While they were able to provide their own spark, they were also unable to hold the Terps off for long, as the Illini would eventually head into the half trailing 45-26, leading Underwood to send his players back out from the half early to go through their entire pregame warmup a second time.

Underwood also returned to the court with bandages on his right hand, and as he charasmatically explained in the postgame press conference:

“There was a trash can that I didn’t like very much in the locker room.”

While it is disconcerting that his team struggled so heavily in the first half, it’s great to see how fired up Underwood got, and that he had no hesitation to go in and take out each of his starters. The team has a lot of growing to do, and they did in the second half, but Underwood is not mailing it in by any means. The man is here to win games, and he will do whatever it takes to make that happen.

He showed that again on Sunday.

Some of the young guys had stellar performances against Maryland. Trent Frazier easily had the best game of his young career, totaling 11 points on 5-12 shooting, while adding in seven assists, four rebounds, and a couple big steals as he locked in big-time on defense.

Underwood echoed the praise for Frazier’s game in his post-game presser.

“Trent played today like he’s been practicing, and it’s almost been scary how dominant he’s been in practice,” said Underwood.

This game was a huge step for Frazier, but it also looks like there was a turning point for freshman center Gregory Eboigbodin. The freshman stepped in with Finke’s early struggles, playing eight meaningful minutes, going on to play some great defense that helped the Illini go on a little run to get themselves back in the game. He contributed two points as well, but the most encouraging development from Eboigbodin’s game was his intensity on defense and ability to stay away from fouling. In previous appearances, Eboigbodin struggled with fouling, but on Sunday, he showed some real growth. Look for him to continue improving on both sides of the floor.

Despite these promising performances, not all of the young guys were on their game.  Smith struggled against Maryland, and may have had his worst game of the season, leading to a big decrease from his usual playing time. Williams threw a pass that ultimately let the Terps force overtime and eventually win the game.

While the freshmen have had their flashes of brilliance, not all was brilliant. And that should not be a surprise. No matter how special these kids are, they are still exactly that — kids. Freshmen have plenty of room to grow and they will continue to improve in Underwood’s system.

Some of the mistakes proved to be costly, but again, that is to be expected. They will use these moments to learn and will continue to improve in the future.

Three-pointers have continued to be an issue, and they came back to hurt the Illini again. In the first half, there was a stretch where Illinois went just 2-12 from three, contributing to the early lead for Maryland. The shooting has to improve, and if the team continues to attack the rim like they did in the second half, the threes should open up as well. Look for a lot more inside-out ball in the future that will hopefully equate to a higher three-point percentage as well.

All in all, this turned out to be a great game and should be a huge learning point for this young Illinois team. Underwood has shown time and time again that he is up to the challenge to get his guys ready, and hopefully, he will be ready to get them up again for Wednesday’s matchup with Austin Peay.