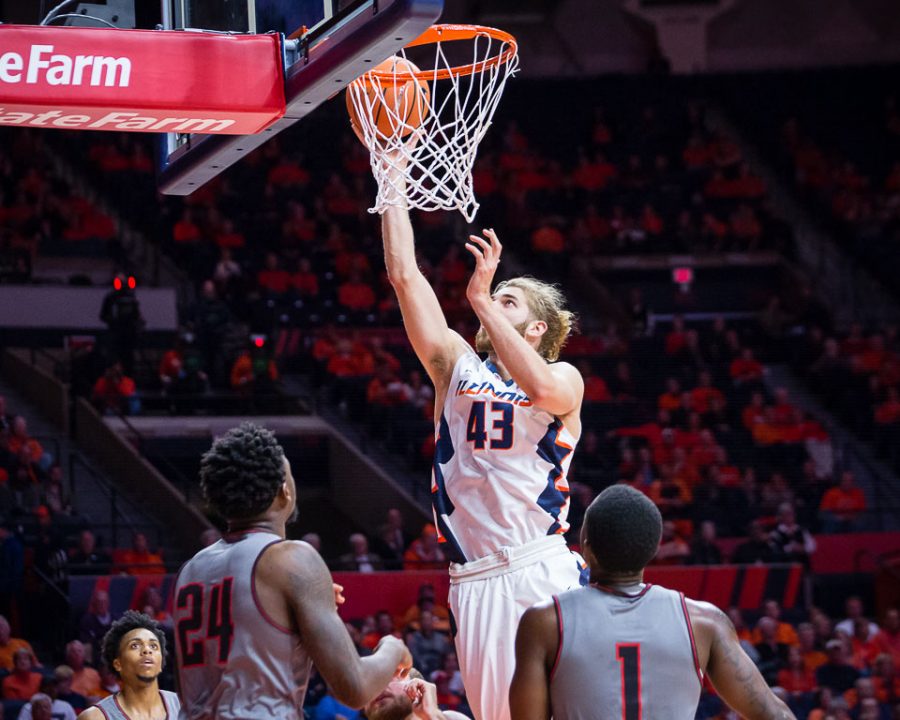 Illinois forward Michael Finke (43) puts up a layup during the game against Austin Peay at State Farm Center on Wednesday, Dec. 6, 2017.

“We’re happy with the win,” said big man Michael Finke in the postgame press conference, and that is really all there is to say about this one.

A win is a win no matter what, and after three straight tough losses, it feels good to get back in the win column. After failing to finish off three very winnable games, even the sloppiest of wins is appreciated, and boy were the Illini sloppy tonight (I’ll get to that later). But, despite the struggle, head coach Brad Underwood and his guys were able to pull this one out. It would have been nice to slap another comfortable win over a relatively bad team on the resume, but a narrow win will have to do.

While Leron Black may have been the most consistent Illini player so far this season, he stepped up again tonight, scoring 16 points and four rebounds. But, he was not the only veteran big man to contribute to tonight’s win. Michael Finke quietly had one of his best games of the year, totaling 17 points and eight rebounds. Sure, it came against a weaker Austin Peay team, but Finke was quietly Illinois’ best player in a game with very few highlights.

During halftime of Illinois’ last matchup with Maryland, head coach Brad Underwood met a garbage can that he did not like very much. Tonight, despite another gross first half of basketball, he was able to avoid any further injuries (that we know of).

But, even though Underwood was able to avoid injury, he has every right to be angry with the results of that game. Illinois was favored by 18 heading into the game, and despite the narrow win, did not look good tonight. They railed for more than half of the game, and turning the ball over 25 times in one night is never going to make a head coach happy — especially the fiery Brad Underwood.

After the game, there was an unusually long delay between the final horn and coach Underwood and the players to come out to the press conference. Some may think it was because of a long speech from Underwood, but Finke and Black offered some insight.

“Part of the reason was because I had to go to the bathroom,” Black said.

Another game, another terrible first half. This is now two straight games that the Illini have dug themselves a hole, and its something they’ll need to fix soon if they want to compete against top Big Ten teams. There were 15 Illini turnovers in the first half alone, making the State Farm Center a real bad place to be a garbage can during halftime on Wednesday — even though Underwood did not add any bandages to his hands after this half.

But, all in all, it was a very rough half of basketball, really on both sides of the ball. While the 15 turnovers say a lot, even the good shots did not fall for Underwood and the Illini. Shooting has been a problem in each of the last few games, and it definitely showed up again against the Governors. Austin Peay is a good defensive team, but majority of the mistakes were self-forced in Wednesday’s game.

The second half was just as bad, as the Illini finished the game with 25 total turnovers, a season-high.

Aaron Jordan has been one of the biggest surprises for the Illini this season, but tonight, he was almost non-existent. Tonight, the breakout junior was held scoreless for the first time this season, and Underwood had a good explanation for it.

Underwood added that Jordan’s scoreless night was due to a lack of execution, and that him and Figger had a type of old school battle going on between old friends. But, more than anything, this looks to be an anomaly for Jordan, who has been spectacular this season. Expect a big bounce-back game from the sharpshooter as the Illini head to Vegas this weekend.

Throughout this early period of basketball under Brad Underwood, the energy for the team has been inconsistent at times, but for the most part pretty high. The team has been tough on the ball, created turnovers, and found open shots for most of the year, but for some reason against Austin Peay, it just wasn’t there. That’s not to say that the Illini weren’t trying out there, but there was a feel of complacency on Wednesday that we haven’t really seen until tonight.

Underwood said it himself in the postgame press conference, saying that there was a certain “passiveness tonight.” He later added that the locker room before the game was “like a morgue,” and went on to say that there was a lack of passion.

Expect Underwood to drill his guys this week and bring that energy out to their next matchup in Vegas.

As bad of a game as this was, you have to be happy to escape with a win. Finke and Black had nice games, and the Illini are back in the win column before they head to Vegas for their matchup with UNLV. Look for Underwood to get his guys together in practice, and hopefully leave the desert with a big win this weekend.