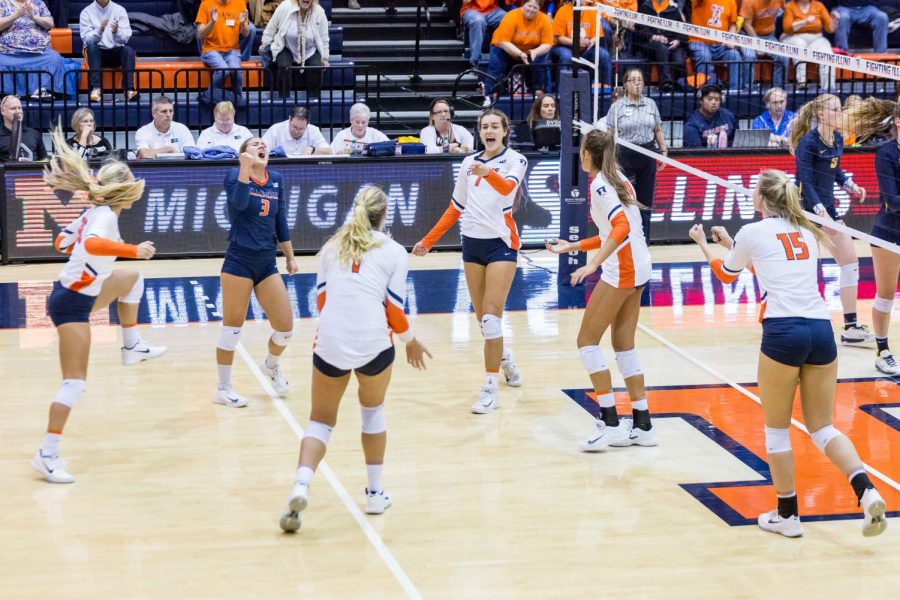 The Illinois volleyball team isn’t just looking to advance through the Sweet 16 round of the NCAA tournament, it’s also looking for redemption.

The Sweet 16 bracket is laden with Big Ten foes and offers Illinois a chance to redeem itselves against Michigan State—a team they were swept by earlier this season.

“I don’t think we were playing our best volleyball back during that weekend and Brandi was still coming back into the mix off of her injury,” Tamas said. “I like where we’re at. We’re kind of the underdog so to speak and I think our team thrives with that.”

During the regular season, the Spartans went 23-8 overall and 14-6 in the Big Ten. That’s not too far off the Illini’s overall record of 23-10 and 12-8 in the Big Ten. Despite the two teams posting similar regular season results, it was all Michigan State in the team’s prior meeting this season.

Within three sets, Michigan State out-hit Illinois .305 to .210, yielding 47 total kills against Illinois’ 38. The number of assists mirrored that of kills for each team respectively as well. And with Donnelly fresh off the bench from injury, Illinois came up with only 34 digs while Michigan State tallied 47.

But this time, the neutral setting and progress Illinois has made on the court will shine through against their Big Ten foe, Tamas said.

“The advantages are in this scenario is that we’re playing them on a neutral floor,” Tamas said. “We didn’t get a chance to play them here at home. I just think the advantages are that you get to adjust.”

As the season progressed, so did the Illini.

“If you look at the story of the whole season, I’m really proud of the way it progressed and improved over that course,” Tamas said. “For it finally coming together against Minnesota, that was a big accomplishment for us. The fact that we had just relaxed because we were in (the tournament) was kind of a big deal.”

Missing out on the tournament last season was motivation to get back into a competitive spot in the NCAA, Tamas said. Any number of sports teams have to settle into the season and work on sharpening their game. Just ask head men’s basketball coach Brad Underwood, whose team has gone 0-3 after starting the season 6-0.

“I actually pulled up next to Brad (Underwood) right over here on Fourth Street alongside each other in the car and I rolled down my window and said, ‘Congrats Coach,’” Tamas said. “I watched their game the night before against Maryland before and I said, ‘Hey you guys were like us at the beginning of the season, you’re young and real close right now.’”

Tamas said his Illini have built upon their failures and learned important lessons week in and week out. Becoming one of the nation’s top teams doesn’t happen overnight, he said.

Despite the addition of nine new freshmen this fall, the team is operating as a well-oiled veteran machine.

“When you do have a young team like we do, I think it’s important just to keep having those experiences and that confidence heading into the tournament” Tamas said. “And obviously these two wins this last week provided us with that.”