The only sport that matters 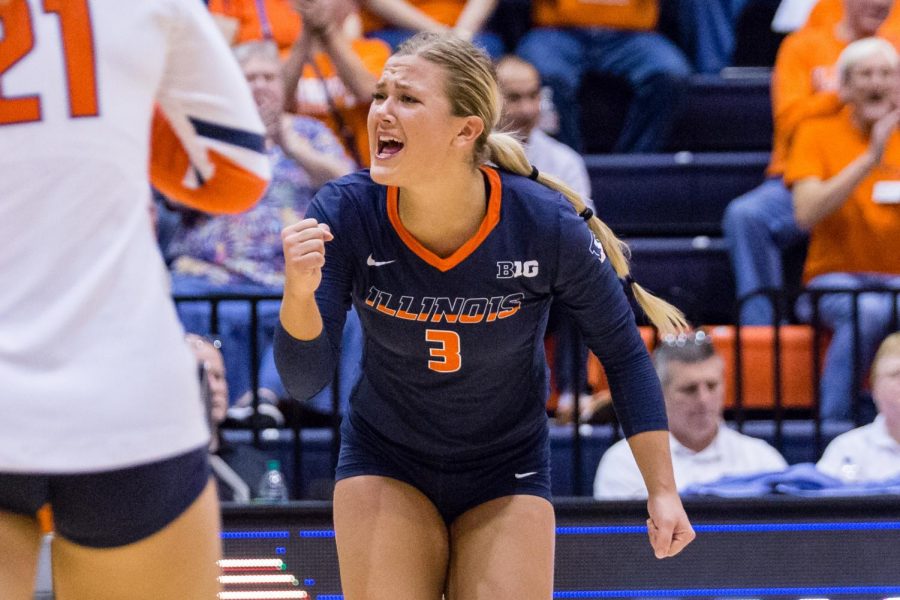 Sports editor Cole Henke says, “Volleyball has been the most consistently fun sport at this University for more than four years.”

The first sporting event I ever went to as a student at the University was a volleyball game.

The Illini took on a ranked North Carolina team. It was the first college volleyball game I had ever seen, and the place was packed.

To this day, it is still one of my favorite memories I have as a fan. Huff Hall was rocking, it was loud and most importantly, the Illini won.

The Illini swept the Tar Heels that night, setting a tone for my next four years that no other team on campus could match. They were going to win, and it was going to be a blast watching them do it.

No other team could find that perfect mix. The men’s golf team has been unreal while I have been here, but it’s not like I can go stand on the green like I can stand on the court at a volleyball match. The wrestling team has an all-timer in Isaiah Martinez, but even he can’t bring the energy that Illinois volleyball has shown they can out of a crowd in the past few years. It’s not his fault; volleyball is an incredibly intense sport to watch.

Illinois volleyball is a powerhouse, and I think its year-to-year success has taken away from the recognition it deserves.

Volleyball has been the most fun program to watch at the University since I have been here, and right now, it should be the focus of every Illini fan. The Sweet 16 is almost expected of the Illini at this point. They have made it to at least the Sweet 16 six times since 2009 — they were national runners up in 2011.

While everybody is waiting for two or three more years for football to turn it around and for the “heart, ache” of basketball to be over, they are forgetting that the volleyball team is really good.

And while the Sweet 16 is not exactly unknown territory for the Illini, that doesn’t mean that getting there this season was easy.

After the anomaly that was last season — the Illini didn’t even make the tournament — former head coach Kevin Hambly dipped for Stanford. Hambly had been Illinois’ head coach for almost a decade, and then he was gone with barely even a word.

Current head coach Chris Tamas jumped in, and with a team with only one senior, he got the program back on the rails. That is what an established program does. They could’ve said, “Oh, I guess we are bad now,” and sunk into a decade-long skid, but they didn’t.

They had a solid core of players and a good coach, and they went back out and won more games in a Big Ten conference that is absolutely loaded. Getting through that conference schedule was a feat in itself. Don’t let that conference record of 12-8 fool you. This team can compete with anybody.

After upsetting Washington, Illinois has a shot at making it even further. They take on Big Ten rival Michigan State this weekend for a shot at the Elite Eight. Illinois hasn’t had much success against Michigan State in the past — getting swept by the Spartans earlier this season — but with this team right now, my money is on the Illini.