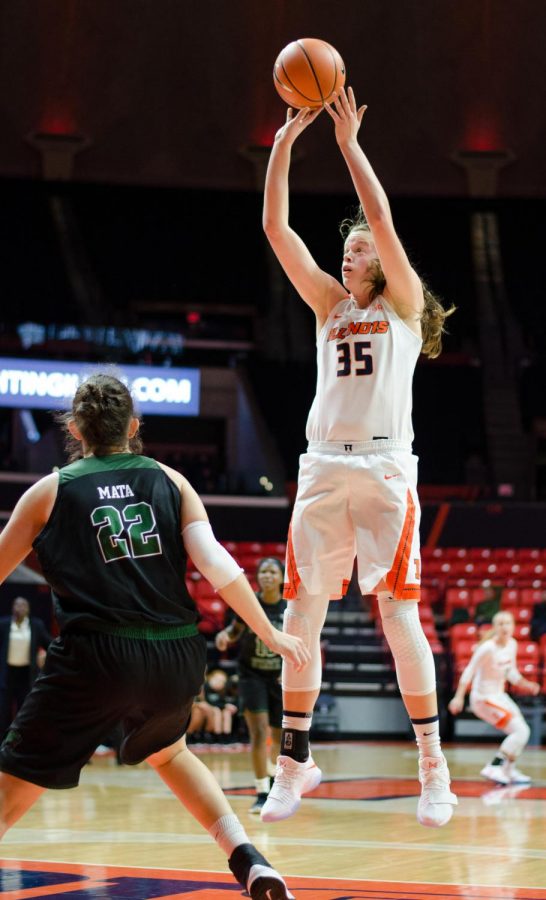 Junior forward Alex Wittinger has become a steadying presence for her coach while also taking on a significant leadership role.

Wittinger posted 14 points and 10 rebounds as Illinois used a fourth quarter surge to seal a 63-47 victory at Memphis on Sunday in a win after a 96-49 loss to Virginia Tech.

“It was a great game to bounce back,” Wittinger said. “There were definitely runs where they got ahead, but we didn’t fold. In the past, we (would) do well for three quarters and then tank in the fourth, so it was good that we continued the whole way through.”

While her performances have been solid in every game so far, head coach Nancy Fahey has encouraged Wittinger to become a vocal leader, and the Delano, Minnesota, native admitted she is still working on it. In the past, Wittinger has chosen to lead by example, but she is ready to make the transition if her coach needs a vocal leader.

After the crushing defeat to Virginia Tech, Fahey hoped her team would not let that game affect them going forward. Wittinger took it upon herself, as an upperclassman, to make sure the Illini responded well.

“I try to push past it and learn from it. You can’t dwell on the past because it could just accumulate,” Wittinger said. “One of my jobs as one of the older players is to be encouraging to everybody and try to be outward-focused.”

Fahey’s main message after her team’s victory was her pride that it fought backand didn’t let the Virginia Tech loss get to it. She wants to build a culture based on looking forward rather than dwelling on mistakes.

“We’ve obviously taken some punches this year, but the biggest thing we’re trying to do here is not look back because that’s the only place your gonna go if you do that,” Fahey said.

Aside from Wittinger, a surprise performance for the Illini came from sophomore guard Petra Holesinska, who returned from to chip in with 12 points. Fahey said Holesinska has a fantastic basketball IQ, and paired with her jump shot, she can be quite the weapon for the Illini.

Looking ahead, Illinois welcomes Indiana State to town Thursday night, who sit at 2-5. Fahey is expecting the Sycamores to be tough defensively, but is focusing on the way her team plays, hopeful there won’t be a repeat of last Thursday.

“We know that they predominately play player-to-player,” Fahey said. “We’re excited to show our community a team that’s a little different than the last one they saw.”

While the program has seen mixed results on the court, Fahey is certainly doing all she can to build a winning culture regardless. Getting better every day, and taking each game one at a time seem to be the early staples of it.