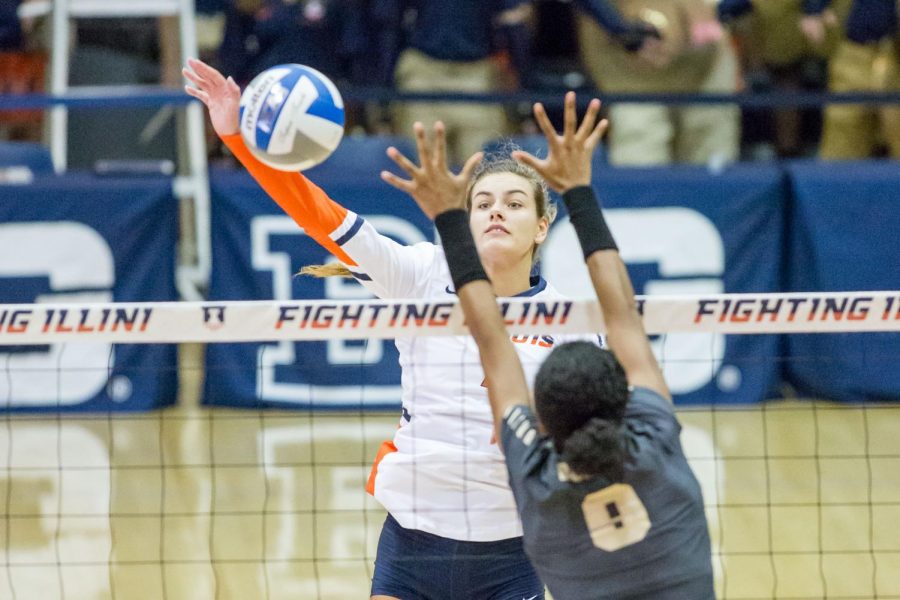 Illinois outside hitter Jacqueline Quade hits the ball during a match against Purdue at Huff Hall on Oct. 6. The Illini played the Spartans in their last game this year.

The Illinois volleyball team’s season came to a close after falling to Michigan State in a four-set battle during the third round of the NCAA Tournament in State College, Pennsylvania.

After rolling into the tournament with 21 wins and only 10 losses, Illinois squeezed by Hawaii and No. 8-ranked Washington in five-set thrillers. With first-year head coach Chris Tamas at the helm, the team made a significant run but fell to the Spartans 23-25, 25-18, 17-25, 27-29.

“Last weekend was really good for us,” Tamas said. “Not many people gave us a chance, or picked us to be here. But after beating Washington on their home court, we definitely deserved to get to where we are.”

It was a back-and-forth battle Friday night. The Spartans and Illini fought through 36 ties and 20 lead changes. Illinois was able to secure a win in the second set, but found itself battling back from a sudden death situation in a fourth set.

The final game alone saw 24 tied scores, which forced the set to overflow the 25-point mark.

The last moments of the game ticked away as Michigan State broke a 27-27 deadlock with a kill and a service ace. Overall, the Illini rivaled the Spartans in kills, 53-62. Illinois trailed Michigan State in assists 49 to 61, but tied with 52 digs apiece.

Adding to Illinois’ conclusive defensive performance was perhaps the largest cornerstone on the team, senior libero Brandi Donnelly, who dug up 22 balls in her final act as an Illini.

According to Tamas, the future is bright for the Illini. But they will have to shine without one of their brightest lights.

“Brandi is a big piece of us still,” Tamas said. “We’re going to miss her a lot. But the offseason should give us a chance to reveal a new dynamic every day and we might even reinvent some positions.”

This season, Illinois defined what it means to be young, with the addition of nine freshmen. The team broke through new boundaries as a new coaching staff took over an already defensive-savvy team.

“We battled every step of the way not just in the tournament, but throughout the whole season,” Tamas said. “The biggest challenge we had was at the beginning of the season trying to get all of these players to become one cohesive unit.”