Foster ready for the next step 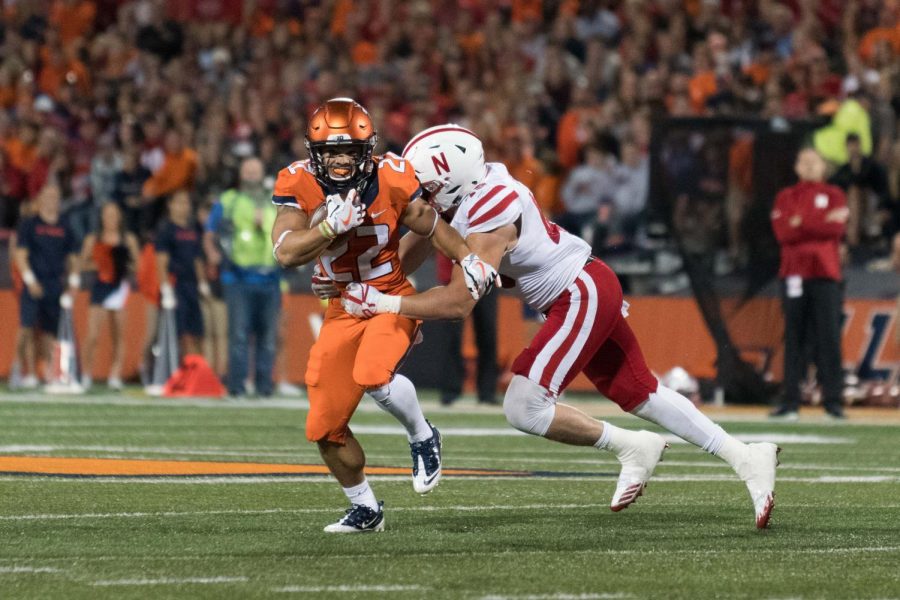 Illinois running back Kendrick Foster is tackled during the game against Nebraska at Memorial Stadium. The Illini fell 28-6.

Mindy Sullivan knew all along that her son, Kendrick Foster, could one day become a Division I athlete, despite Foster’s high school coach not believing he could compete at this level.

He rushed for 6,401 yards, the fifth-most at the time in Illinois high school football history.

Foster then enrolled at Illinois in the fall of 2013 and redshirted his first year on campus. He did not see the field in his first year of eligibility under head coach Tim Beckman.

But in 2015, he got his first shot to show what he could bring to the Illini offense; however, he played in only six games.

Foster rebounded in 2016 and recorded 720 rushing yards to go along with seven touchdowns. He was the main running back, and he won the Most Valuable Player award for the Illini.

After his impressive 2016 season, fans and players had high expectations for Foster coming into 2017.

But highly touted freshman running back Mike Epstein was ready for the workload right from the get-go.

Epstein received 11 carries, compared with Foster’s eight. The freshman ran for 54 yards and two touchdowns against Ball State, while Foster totaled only 15 yards.

The senior received only three carries, while Epstein and other true freshman Ra’Von Bonner got 33 total carries.

Foster said his benching wasn’t easy to deal with, and he knew he had to make the most of any opportunities he would receive during the season.

“My family told me to trust in God and lean on my faith,” Foster said. “I have been holding strong to my faith, and it honestly has been helping me so much keeping a positive attitude about things. Some people might have fits and complain, but I try to continue to work hard and encourage the younger guys just to set a good example.”

As the season went on, Epstein and Bonner continued to be the workhorses of the Illinois backfield.

But in the Illini’s Week 5 matchup against the Hawkeyes, Epstein suffered a foot injury that would sideline him for the rest of the season.

Bonner also hit the injury bug when he went down with a head injury in the Illinois’ loss to Minnesota in Week 7.

Foster saw this as an opportunity for the coaches to give him that starting role.

Coaches recorded Foster running a 4.3 40-yard dash over the summer.

He has also experienced his fair share of quarterbacks throughout his time at Illinois. First, he was introduced to Nathan Scheelhaase, who is now an offensive analyst for the football team.

The running back has also been lined up next to Reilly O’Toole, Wes Lunt and the three quarterbacks from this year’s team.

Foster said he has had to do a lot of adjusting during his college career, but his teammates have always been there for support.

Smith showed he wanted freshmen playing as much as possible last season.

Illinois was the youngest team and started the most true freshmen in the country. Having Epstein and Bonner in front of Foster further illustrated Smith’s plan to get his young players some exposure to the college game.

“I’m not going to sit here and say it wasn’t frustrating (not receiving as many snaps),” Foster said. “I believe I handled it well, but it was definitely frustrating, but all I can do is when I get that opportunity, just to make the most of it.”

But when Foster received his opportunity in the second half of the season, Smith was pleased with how he handled his situation.

“For you to know Kendrick Foster, he’s a team player,” Smith said. “Everything you are looking for as a coach that you want to see in a player, I think he has. He’s worked extremely hard in the offseason and has done everything that we’ve asked him to do.”

That work ethic has helped Foster off the field as well. He has been involved with many charitable organizations.

He also spent time with the Colton Underwood Legacy Foundation football camps. The organization advocates for young people with cystic fibrosis to get involved in athletics, and it helps provide resources so they have a wide range of opportunities.

Foster is also involved in the football team’s annual “Lift for Life,” which helps support rare diseases in the community. The event began in 2011 after former Illinois football player Andrew Carter was diagnosed with acoustic neuroma and would never play football again.

“He has always been involved in giving back,” Sullivan said. “He now does bigger things that have an even bigger impact. He is just a great kid.”

Foster said he wants to try proving more people wrong when he attempts a career in the NFL.

He said he trusts that scouts know his capabilities and hopes that a few teams can give him a shot to be on their rosters.

The running back believes his time and effort in the weight rooms will also help his chances at earning an NFL roster spot.

He said he would like to be a running back but would not mind playing on special teams because of his versatility.

The NFL goal may be less likely than 1 in 20,000, but his supporting cast around him knows that if anyone can make it happen, it is Foster.

“He just continued to work on himself like he always has,” Sullivan said. “This is a kid … his spring breaks he trains. In summers he trains with others in Phoenix. This kid always trains and always works hard, so I absolutely think he can go to the NFL.”