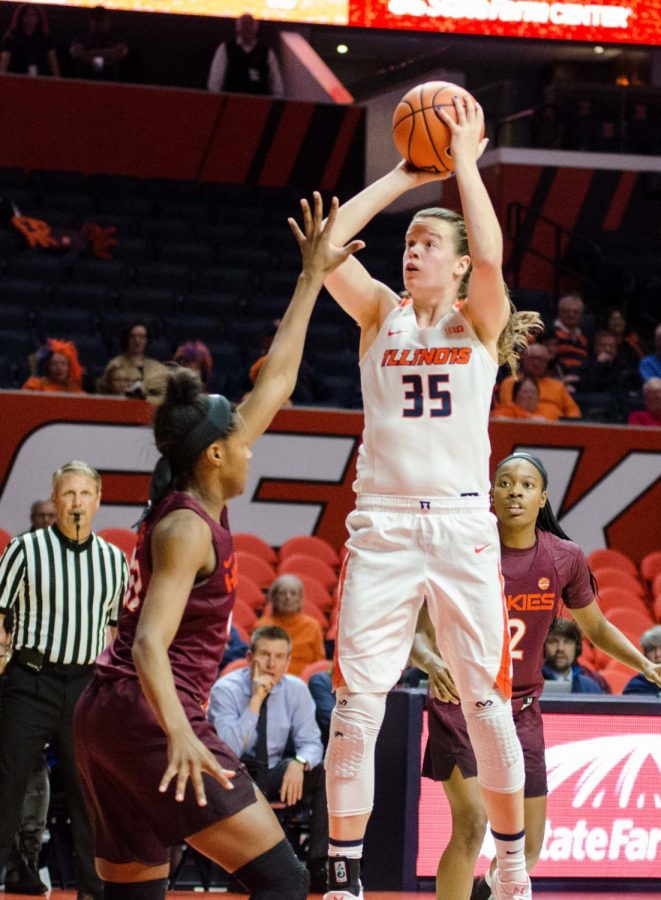 While it was not as comfortable as Thursday’s win, the Illinois women’s basketball team ground out a 73-65 victory over Detroit Mercy on Sunday.

Head coach Nancy Fahey emphasized that while it wasn’t flashy, her team got the job done by taking care of the simple things.

“A win is a win,” Fahey said. “We didn’t come out the way we wanted to. Give credit to Detroit; they did a good job defensively on our on-ball screens. Big thing was the free throws–those easy points, you’ve gotta take those in close games.”

Both teams had respectable performances at the charity stripe, as the Illini shot 20 of 26 while the Titans made 18 of their 22 free throws.

Although she’s led Illinois in points and rebounds during most games, Wittinger credits her success to Fahey’s system and feels it has helped her and Beasley have the success they’ve had this year.

“It’s about continuing to play as a team,” Wittinger said. “Brandi is our best ball handler (and) if it’s crunch time, we let her get open (and) let her do her thing, but for the most part it’s about sticking to our system.”

Coming off the heels of a career-high 10 points against Indiana State, freshman guard Addaya Moore received a second set of consistent minutes on the floor. Although she didn’t enter the game until late in the third quarter, Moore was part of the lineup that closed the game, playing nearly the entire fourth quarter.

“To me, every time you go to practice, every time you play a game, you’re giving me feedback (on) how you’re going to play under the situation,” Fahey said.  “I got to trust what they’re doing. Well, guess what? (Moore) came out last game, had a great game. Difference tonight, (there) was a little more pressure; it wasn’t a game that was secure, but she earned that.”

The Illini are off until Dec. 16, when they’ll resume play at home against Austin Peay. The break will provide some time for the Illini players to improve academically as well as on the court, which Wittinger made note of.

“It will be nice to sit back for a little bit, but at the same time, we’re gonna be getting in our shots while preparing for our next games and cracking down on the school work,” Wittinger said.

That comment brought a laugh to Fahey, but she is hoping the layoff will allow her team to recover before conference play tips off.

“We play a lot of games really fast. We’re gonna give them a couple days (off),” Fahey said. “Not only do they need it, (but) they’re students–sometimes we forget these guys are going to classes and doing things beyond the demands that we’re doing from the basketball standpoint. So, I felt they earned a couple days (off).”