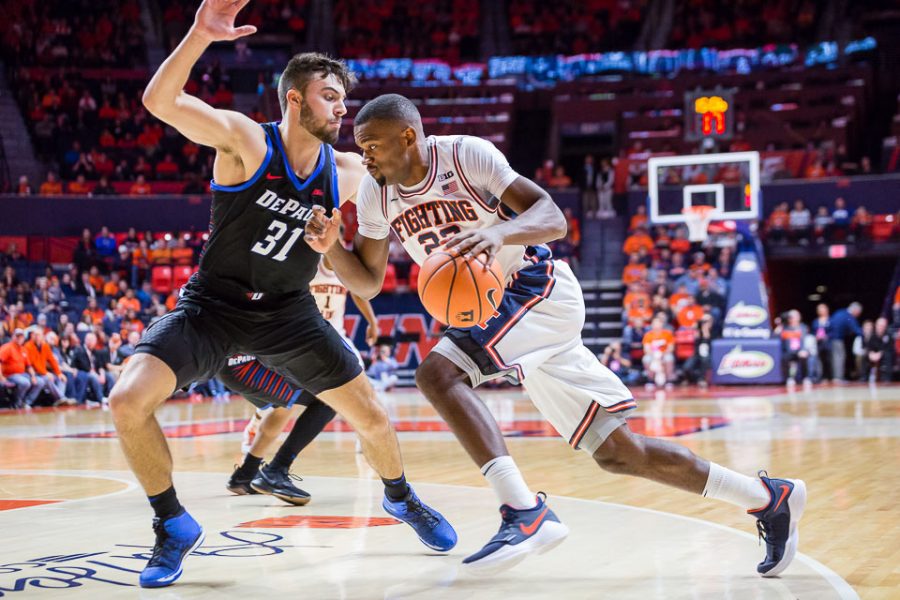 Illinois guard Aaron Jordan (23) drives to the basket during the game against DePaul at State Farm Center on Friday, Nov. 17, 2017.

Coming off of a couple disappointing losses, the Illini took on the Longwood Lancers on Wednesday night, and let me tell you, this one was never in question.

Underwood and co. got off to one of their patented slow starts, but considering the competition, it did not mean nearly as much as it did compared to a game like UNLV or Maryland. Considering the Illini were able to stretch their lead to a comfortable 26 point lead at the half, with a score of 50-24.

Fans were ready to text McDonald’s for their free fries that they get when the Illini score 75-plus points by the 11:26 mark in the second half, and at that point, it was all but over, before eventually going on to win 92-45.

But, with all that said, let’s take a little bit of a deeper look into the game.

Despite recent losses, we were able to see the positive side of Underwood, and I think that it is safe to say that all of the garbage cans in the Illini locker room were safe on Wednesday. That was evident when Underwood led off his post-game press conference offering his thoughts on how good the State Farm Center popcorn is.

While this doesn’t necessarily offer too much insight on the game, it’s fun to see his reactions game to game. It’s evident how hard he works his guys in practice, and when it pays off in the games, Underwood is noticeably happier.

Turnovers had been an issue in the past few games, so for the Illini to move the ball so well against Longwood was certainly encouraging. Despite the weaker competition, there is no denying that the offense was running nicely, and that was much in part due to the superb ball movement all game. Committing only 11 turnovers and adding in 20 assists doesn’t hurt either.

Te’Jon Lucas led the team with five assists, but the whole team was seeing the floor well and making smart decisions on Wednesday night, a big factor in shooting 46.6 percent from the floor and putting up 92 points.

For the second straight week, we have seen Trent Frazier absolutely dominate.

While his stats don’t necessarily say “domination,” Frazier has been phenomenal over the last few, and he has a noticeably different look to him out on the floor. He has been hitting his threes, d’ing up and creating turnovers, and makes stunning finishes at the hoop time after time.

While this may be a stretch considering Frazier’s high school numbers were on another level, he is starting to look like the kid I watched in high school mixtapes, and it has been very fun to watch. Frazier and the rest of the freshmen have a lot of room to grow, but it’s impressive how far he has already come.

No Leron, no problem…at least not yet

In the last game against UNLV, Leron Black sustained an injury to his elbow, keeping him out of Wednesday’s Longwood matchup. On an already undersized team, losing a guy like Black — and not to mention Kipper Nichols — changes the whole dynamic of this team, and forces coach Underwood to go to a lineup that relies heavily on small-ball.

But, even without Black and Nichols, the Illini were able to make that adjustment and win big with the new-look lineup. The one-two punch of Trent Frazier and Aaron Jordan was absolutely phenomenal on Wednesday, combining for 42 points, 12 rebounds and six assists. Using a smaller lineup like this, the ball movement was phenomenal and Underwood emphasized that that was a big part of his gameplay against Longwood.

But, with tougher games coming up against teams like New Mexico State and Mizzou, it would be concerning to head into those matchups without Black and Nichols, but considering the way they played on Wednesday, it might not be as big of an issue as many may think. Greg Eboigbodin stepped up and played some big minutes against Longwood, and we were even treated to Matic Vesel’s first two points of his Illini career.

While losing Black and Nichols is not ideal in any sense of the word, it’s great to see others stepping up and filling the void.

There really were no negatives tonight aside from the slow start, but that even was not that big of a deal. The one thing I would say to consider when looking at this game is to consider the opponent, but even then, it was still an impressive win. Jordan and Frazier were spectacular, and tonight really felt like that “Brad Underwood system” that we talked about all offseason.

Obviously, Longwood was a bit of a layup, but the schedule quickly gets much tougher. The Illini head to the United Center in Chicago to take on a tough New Mexico team, before bouncing right back for Braggin’ Rights in St. Louis v.s. a surging Mizzou team. That being said, it is important that the Illini continue to move the ball like this, and if Nichols and Black are out longer than expected, the guard group will have to continue to step up and fill the absence.

But, one game at a time, and tonight was certainly a good one.