Illinois football struggles through another season 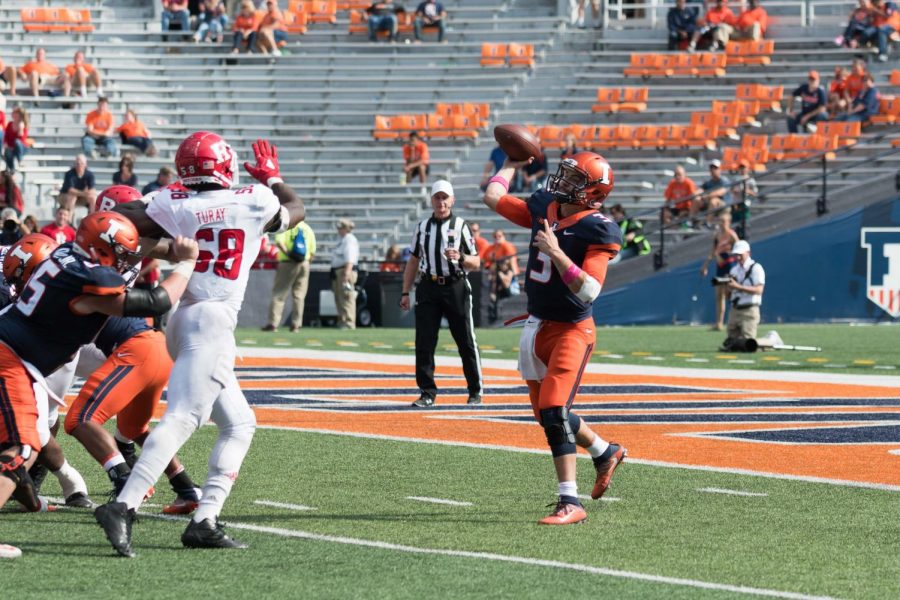 Illinois quarterback Jeff George Jr. throws a pass during the game against Rutgers on Oct. 24. The Illini ended their season 2-10 overall, with zero wins in the Big Ten conference. George was just one quarterback who got playing time this season. Others include Cam Thomas and Chayce Crouch.

The Illinois football team’s 2017 season was centered around head coach Lovie Smith’s decision to play as many freshmen as he could.

On a team with only nine seniors, Illinois played 87 true freshmen cumulatively, the most in the country.

The Illini could not overcome their youth during the season, however, mustering only two wins.

The team opened with consecutive victories over Ball State and Western Kentucky. Mike Dudek had his best game of the season against the Ball State Cardinals, but injuries would once again catch up with the junior.

Dudek played in only seven games with six starts at wide receiver.

Illinois had many struggles during its next 10 losses of the season.

“This season, it hasn’t gone exactly the way we wanted it to,” Smith said. “Whenever you lose as many games as we did and finish the way we did … we’ve seen improvement from a lot of young football players, but it’s about the wins and the losses.”

Inconsistent quarterback play caused the Illini offense to struggle to move the ball.

Chayce Crouch started the year at quarterback, but Jeff George Jr. replaced him as the starter in the team’s Week 5 matchup against Iowa.

Crouch struggled to get the ball to receivers and did not use his legs as much as coaches had hoped he would.

The junior finished the season with 443 pass yards and 88 rush yards in seven games played.

George did not fare much better. He threw for more yards and sustained longer drives, but he turned the ball over too much for the coaches’ liking.

The sophomore finished with 1,273 passing yards and seven touchdowns, but was intercepted 10 times.

Freshman Cam Thomas also received a few starts under center, but had difficulties throwing the ball as well.

“Cam is growing every day; the future is bright for him,” said offensive coordinator Garrick McGee. “Cam was a really good get for us, he just needs to consistently deliver the ball.”

The freshmen running backs impressed early on. Mike Epstein emerged as a proven starter for the future Illini backfield.

Epstein was forced out of the Iowa game with a leg injury and did not return during the season. He finished with 405 total yards from scrimmage in just five games.

“College football is pretty much what I thought it would be,” Epstein said after the Illini’s first win of the season. “When I see that green grass in front of me, that’s what I work for and I want to take advantage of it.”

Ra’Von Bonner stepped up and proved he could be a nice alternative to Epstein. Bonner also had his season cut short with an injury, but he racked up four touchdowns in six games played.

Ricky Smalling and Louis Dorsey gave fans a glimpse of the exciting plays they could see in the future. Both freshmen had a few highlight-reel catches that showcased their athleticism and capabilities to compete in the Big Ten.

On the defensive side, freshman Bennett Williams was one of the top safeties in the Big Ten. He recorded 64 total tackles and had three interceptions.

He was named to the ESPN Freshman All-America team. The defensive line was overmatched by many teams and still needs to get stronger, but there were a few positive signs.

Many of the defensive players need to get stronger, but the coaches are confident in what the defense and team will look like in the future.

“We knew we had to rebuild our program, and that’s what I think we’re doing,” Smith said. “We’ll continue to do that, so I think if you’re on the inside, you’ll see that and talk about the young players that are playing right now. Talk about the close games we’ve been in, and I think you can see the reason why there’s a lot of optimism.”